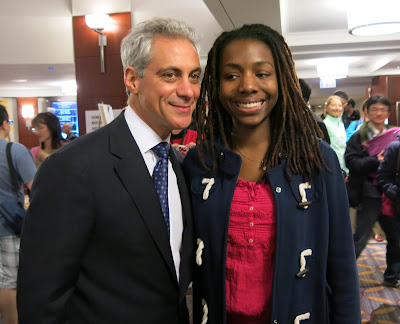 I woke up at 5, walked through downtown Chicago and took some pictures: 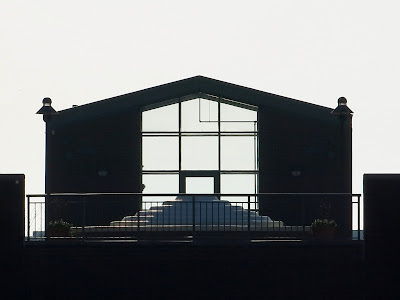 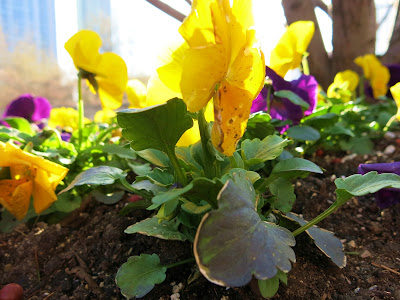 I'm not doing so great on the blogging, I know.
I'm doing a lot of packing, as we are moving upstairs on May 1. Upstairs is twice as big as downstairs (2 floors), so we'll have room for baby, and for Helpful Mother-in-Law. Also our windows won't be at street level, so we can keep the blinds open and have lots of light.

Work is really getting me down. Every morning I try to talk Jonathan into playing hooky with me and spending the day at the beach. Even today when it's 50 degrees out. He always says no because he's way more responsible than I am.

I did my 3rd quarter grades today and it made me unreasonably angry. Our grades are all online throughout the year, so parents and kids can see their grades in every subject at all times. I give a few kinds of homework, but one standard weekly assignment in my advanced classes is 25 correct chesstempo.com problems every week. It's due Thursday; I check every Friday morning. Late problems get only half credit. It's fine to do them in advance, and the exact number of completed correct problems each kid needs to have for each Friday is written in a note to each week's assignment.

If you haven't experienced chesstempo.com, I use the site because it's free and it adjusts to each student's level. If you get a problem wrong, your rating goes down, and you are "paired" with an easier problem next. I make all my students start their handle with IS318, so it's relatively easy to check. I explain to them that working at these problems is one of the fastest ways to get better at chess.

I explain it's like going running: they have to work at it. I use the example that a runner could just get in a car and drive for five miles but say he went running, and people might believe him that time, but when the real race comes he's still going to be fat and out of shape. I say that chess is hard and you won't get better if you aren't willing to work and wrestle with the hard problems that aren't obvious to you right away.

So what happens? A significant percent of students just stop doing the assignment and fail my class as a consequence, despite weekly verbal and email reminders, even though they and their parents can see their grade decline each week. Even though they could sit down and do two hours of work at the beginning of each quarter and get an automatic 100 and never think about it again for 2 months.

Almost all of the kids do the problems by guessing as fast as possible, spending 10-15 seconds maximum because they know they will get an easier problem if they are wrong. Some of them go into settings and change the level from normal to easy, so each problem is a mate in 1, or its equivalent. Their ratings are generally 400-600 points lower than their actual ratings.

I gave all the nationals kids a tactics packet of harder problems to do in their week and a half spring break before nationals. I email the kids and their parents reminders to do the packet. More than half the kids don't do more than the first page. The ones who do more mostly just do the easiest problems, and write nonsense for the hard problems or write "castles" for every single answer. The best ones use Fritz to cheat, and I'm almost grateful that they even bothered. (I can tell the cheaters because if I take away their papers, they have no idea of any of the answers.)

I make online multiple choice quizzes, 10-20 diagrams each, for my students to test if they learned their openings. Each quiz has a practice module with exactly the same questions as the real test. You can do the practice as many times as you need to before taking the test, so you are practically guaranteed to get 100. A quarter of the students don't bother to take the test in the first place. Another quarter can't be bothered to do the practice, even though it gives you all the answers ahead of time, so they fail anyway.

Ten percent of my early morning students don't show up on any given day, and another ten percent are late almost every day.

Half the kids who sign up for a tournament don't show up, even though their $50 entry is donated by the tournament organizer. On Monday, they tell me they forgot or they didn't feel like going.

I have the kids write reflections after nationals. One of the questions is "What would you do differently next Nationals to play better?" and almost every kid writes about being exhausted. On the next question, half of them describe the best part of the tournament as staying up all night Saturday night.

I know they are just kids, and I know as people get older they forget what it was like to be young and projct their adult selves backward in time, but I feel increasingly like having high expectations is beating my head into a wall for no reason at all.

I look at the advanced entries yesterday for this weekend's Girls Nationals, and notice what a great U12 team Weibel has. That leads me to look at their website, and I find their list of instructors:

Alan Kirshner  Started Weibel Chess 24 years ago, claim to fame--he is still around

Richard Shorman  Arguably the best known chess instructor in the Bay Area for near 50 years, wrote a chess column for  Daily Review, 13 years at Weibel


Don't get me wrong: I think it's awesome that other programs are so well-developed and well-staffed, it's fabulous for chess generally and for those kids in particular. I know I probably sound like a bitchy self-pitying complainer, but man, how is it possible for me to compete with that? When I can't even get my kids to complete a tactics packet and show up?  I guess it's the right time for me to have a baby/take some time off/ pull back a little from being so obsessed with work.
Posted by Elizabeth Vicary at 6:08 PM 31 comments:

Chapter Three, "How to Think," of Paul Tough's recent best seller starts with me going over the game of Sebastian Garcia, a sixth grader at his first nationals, playing in the Under 750 section. He plays quickly and poorly, and I pretty much tell him that.

Fast forward two years to last week, when he ties for 3rd (4th on tiebreaks) in the Under 1250 section with 6/7. Well done, Sebastian! 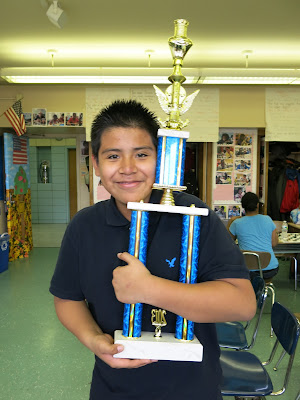 In other news, Patrick Masucci from DiscoverPoint Capital and Winston Bowen from Citigroup came to 318 to make a interactive powerpoint presentation to chess students (and assorted others) about investment banking, what it is, what it's like, and how to pursue a career in the field. 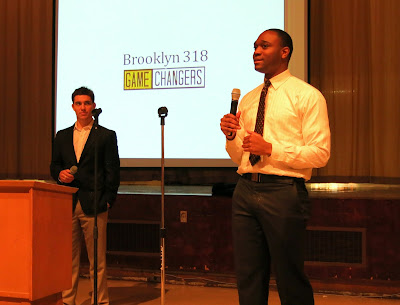 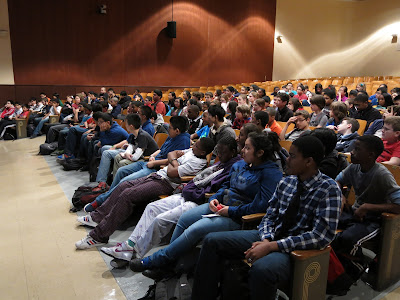 Thanks, Pat and Winston!
Posted by Elizabeth Vicary at 7:52 AM 3 comments:

I'm pregnant! hurray! I don't know if it's a boy or a girl yet, but obviously will find out ASAP. I don't understand people who "want it to be a surprise." I feel like giving birth will be surprising and momentous on its own without needing any extras. Also, I hate waiting. I have a little belly already, but luckily most of my clothes are 2 sizes too big, so it's not obvious/uncomfortable yet.

I'm due Oct 27. I'm planning to take off from October-February, and then Jonathan will stay home from February-June. It's a big advantage of having basically the same job (shop teacher): we're programmatically interchangeable.

The only downside is that I'm having some complications, so I'm forbidden from traveling for 3 more weeks, which means no supernationals for me. I'm pretty bummed about that, as I usually find nationals both professionally exhilarating and the social highlight of my year. Also, I'm extremely worried the kids will all play superfast without me there to yell at them, but probably I overestimate myself. I will obviously be glued to the results page all weekend.

One of my students, Haby, wrote this extremely touching facebook wall post for me, which made me feel pretty fabulous:
"This upcoming Tuesday our chess team will be traveling to Nashville to compete against the nation
You have put time and effort to help us grow and so that we can become champions, and so this time we are playing for YOU !
Every point made by a 318 player is one more appreciation we have for you."

I haven't felt very nauseous, just insanely tired all the time. I get up and feel fine, then by the time I've showered and dressed, I'm ready to crawl back into bed. But compared to IVF, which made me feel like a Soviet psychiatric patient, pregnancy has been a walk in the park. I obviously miss sushi, wine, running, and one or two other things, but I guess it's good to relearn some self-control. I've also started eating organic food, using phlalate and paraben-free soap and shampoo, not eating canned food or using plastic containers, and (my favorite) never, ever touching receipts (last three = BPA). Jonathan has taken over all (literally all) of the housework, claiming my job is only to sleep, which is angelic of him. And I hear the second trimester is the most fun, so I'm looking forward to that.

In other news, I took some kids on a fun field trip to American Express headquarters to mentally prepare them all for lucrative careers in finance.

I've read some great books, the best of which was Bad Pharma: How Drug Companies Mislead Doctors and Harm Patients. My father is a doctor (actually was; now he's a celebrated chess teacher) and he always used to say it's ridiculous how many people take cholesterol-lowering drugs, as they haven't been proven to affect any real outcomes, and I used to dismiss that, but now I see he is completely correct. He also told me a story about how he published an article about the side effects of a Pfizer drug, which resulted in Pzifer sending two goons to threaten him if he didn't retract the article and he had to call hospital security.

a few recent photos of IS 318 players: