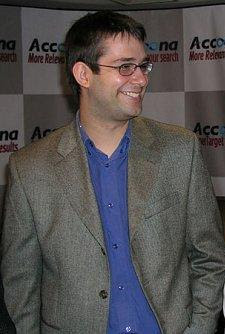 EV: I feel like we have to begin with the question that’s on everyone’s mind: how come New York sucks so much this year?

PC: I do think the financial crisis has affected us. There is unrest in the city. Many people are without jobs.
Did you see SNL last night?

PC: Richard Fuld, the former CEO of Lehman Brothers, was on the show, not him actually of course, some guy playing him, wearing just a barrel. We are a very finance-heavy team: three of us, Gregory, Matt and I all work in the financial world.

EV: Or is it possible you have it backwards and the financial markets are responding to the Knights abysmal performance? Chess as economic indicator....?

I have a theory, in fact, that Wall Street’s collapse may have been engineered by Putin, with the help of a sleeper cell: Shabalov, Braylovskiy, Zenyuk, perhaps even Krush?

PC: I agree, we are a very Russian team. And just like during the Cold War, you have to be very careful, suspect everyone. Even Fedorowicz has a bit of a Soviet-sounding name…..
I will advise all New York Knights to avoid drinking the Marshall Chess Club water.

EV: And not to touch the light switches?

PC: Absolutely. We’ll have one of our operatives do that for you.

EV: But really, can you think of any other explanation for Shabalov’s performance?

PC: Probably Alex decided that Hikaru’s start was bad, and so he had to outdo him. And he’s succeeding, so far.

EV: Last week, what a disaster. Any comments, blame?

PC: It is amazing how badly we have done. Carolina was a match you would have hoped we could win. And the ratings looked good: we were well-matched up on each board except the last one. That Craig Jones guy is pretty good. But I don’t think there was one decent position in the match—not one game….

EV: Yeah, I understand you had some computer problems?

PC: Somehow we never have enough laptops. It’s like the movie Gangs of New York: we’re still in that mode where we fight very primitively. I think Irina really wants us to play using the telephone.

But last week was almost a complete disaster: Irina usually makes sure there is at least one computer, but she was out of town. So I got there, in fact I was in the neighborhood coincidentally and just happened to drop by, and discovered no one had brought any computer. Panic! Eventually I found an old laptop that the Marshall let us use, but it had no power cord. I stayed to relay the moves, but I knew we had just an hour or two of battery power. Luckily, Evan was willing to bring his laptop by later.

EV: How about the match against Philly?

PC: I think we played okay there. I had to beat Philly, you see, I had such a terrible score against them, almost the opposite of Boston, and so (Philadelphia captain) Mike Shahade would constantly make fun of me, but now I expect to beat them every game for the rest of my career.

EV: Monday night’s match with Queens. What went into choosing the line-up? Any predictions? Advice?

PC: Well, Fed really wanted to play, and he’s the only player with a 100% record, historically.

EV: And you think he’s going to beat Strip with black? Or you are secretly praying for a draw? You can tell me the truth.

PC: No, really, I expect at least a draw. Fed is solid and underestimated.

EV: It will be some weird anti-Sicilian? What’s your guess?

PC: I’m predicting 2. Na3. I hope Fed reads this so he knows what to prepare.

EV: And Bonin? Rough matchup against Vovsha? Any words of wisdom for Jay?

PC: I would really advise him to stay awake for the whole game. And to avoid moving his queen too early. Because he sometimes does that.

EV: Can you wake him up if he falls asleep? Are there league rules that cover this situation?

PC: I think the most I can do is get him a coffee, and I’ve done this a few times already.

EV: Zenyuk? You have to like her chances against the kid.

PC: Yeah, I think she’s just much better than her opponent, so she should have no problems. Also, she can use her height advantage to box him out and keep him away from her first three ranks.

EV: And what do you think, realistically, our playoff chances are?

PC: I guess they have gone from 97% to… well….. 93%? We always sort of assume we are going to win the last five matches…. But you know, I really have been disappointed in our performances so far.

EV: What do you think needs to change?

PC: I think we need someone to play well, to show we don’t have to lose every game, and this will motivate everyone.
Also, I want to remind people to castle when they are black.

EV: Why don’t we have any kids?

PC: Probably some physical reasons. Oh, you mean on the team? Sorry, yeah, I don’t know. I feel we need to hire a few recruiters for the team. Given that recruiters are not able to find jobs in finance right now, they have some spare time to scout hidden young talents who would complement our team well. I feel that having someone with a lower rating (say, around 2000) who really plays like a GM would be helpful. Applications can be sent directly to Irina or me via email.

EV: You just got a new job, congratulations. Tell us about it.

PC: Thanks. I’m starting at a hedge fund next week. One of the challenges with the Knights and a job like this is to stay awake for the games, because I have to wake up so early. So last time I drank coffee all day and throughout the game. Then I couldn’t sleep that night.

EV: Let me ask you a couple questions about the larger chess world. Any thoughts on Kosteniuk winning the Women’s World Championship?

PC: I thought Kosteniuk played the best chess in the tournament. Hou Yifan actually played pretty badly throughout: nervously. I’m sure there was a lot of pressure on her. But she managed to get through a lot of rounds despite playing badly, so maybe that says something about how strong she really is.

EV: And the Olympiad in Dresden—you will be playing for the Canadian team. Doing anything special to prepare?

PC: Yes, I’ll be on board two, with Bluvstein, Zugic, Roussel, and Noritsyn. I don’t really have time to study much. I’d like to prepare some more solid openings with black though. I was looking at my results on the FIDE site recently: they break it down for you by color, and I had some huge record with white but some equally extreme bad results with black. But beware, I will have fixed any problem I may have had in the past by my next black USCL game. 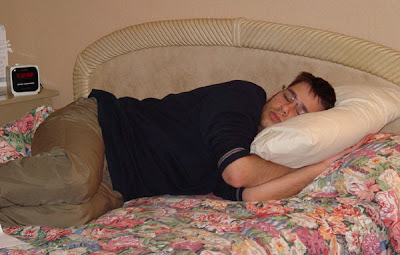 Posted by Elizabeth Vicary at 4:55 PM

? I thought to have a team as part of the league, there had to be rock solid computer setups with TWO (2) methods of communicating - at least that was what the USCL site use to claim...

There is no rule that says that a team must have 4 computers, however all teams do except for NY and for some reason this has always been the case. Seems like a big disadvantage to me, but NY has had historically pretty good success.

Also I'm pretty sure they do have two possible internet connections. They haven't had to use their backup, which used to be dialup, for years though

The location does not have permanent computers so it is unfortunately up to some of the players to bring them. We have never had a problem except that we do need to share. However, in terms of methods of communicating, we would typically have at least three or four (DSL wire, wireless (and many wireless networks), old style AOL dialup, and a Verizon card) .. there is no rule about the number of computers, but more about making sure there is always a connection.

It seems that key members of the team are having their creative juices sucked dry.

When New York plays Queens, can they play face-to-face instead of over computers?

The setup is costing the Knights bigtime. As a New York Sports Fan, I demand SOMEONE be fired.

Maybe the other teams just got better while the knights lost key youngsters such as Hess and Arnold. You just cant expect to win with Fed and Bonin, i am sorry.

we ARE going to win the last 5 matches.

There probably are only five people in the world that play both chess and golf, but something probably can be learned from the Ryder Cup. There, the injection of youth for the US really was the difference between winning and losing. Plus, if the team was younger, my bet is that they'd bring their own laptops!