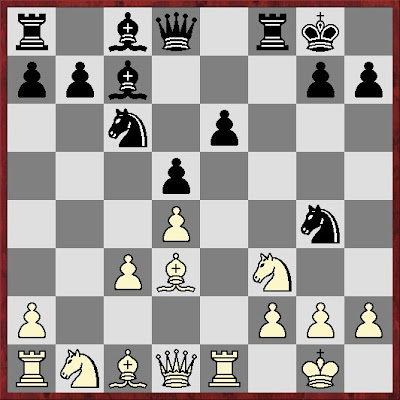 want to see my new apartment?

view when you come in.
living room/kitchen is ahead, with Jonathan. to the right is the door to the roof deck.
living room, more normal view
jonathan's studio room/ my work room

so much view
Today I'm packing all my stuff. Movers come tomorrow at 7 am! so excited...
Posted by Elizabeth Vicary at 9:50 AM 8 comments:

I'm sorry I don't blog anymore. It's the boyfriend: I used to save up my best thoughts to tell you, but now I just tell him: quicker.

We signed a lease on a new apartment in a fancy luxury building with many appliances. It has a gym and a pool table and a freshdirect storage room, which I find hilarious, since you get to choose the time that freshdirect delivers; they're not like some totalitarian cable company. But if you have a tiny little room off the lobby of an apartment building that you don't know what to do with, I guess it sounds like a perk.

We also have a big balcony and a roofdeck and a picturesque view of neighborhood rooftops and Brooklyn's skyline. I will sit outside every morning and drink my tea. I will be very happy there.

Jonathan Hilton was kind enough to send me a review copy of Wojo's Weapons: Winning With White, even after I told him I probably wouldn't review it. (I'm way too busy right now to be reading opening books.) But he sent it anyway, and it's already been useful twice, even though I've only skimmed it.

It covers Wojt's white repertoire: 1. Nf3, the Catalan, the Slav with 4. Qc2. I have a couple of students who play the Catalan, and I know nothing about it, so I was interested. Jonathan and Dean do a nice job of explaining ideas. For example, one of my students always gets the following position 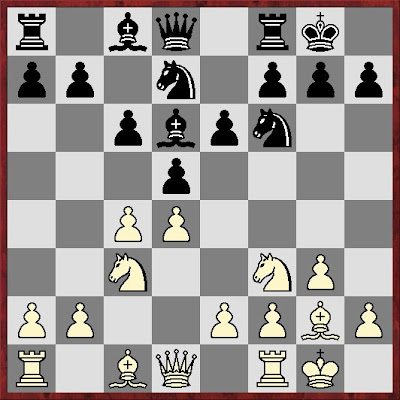 as white and I have never known what to tell him, planwise. But now I can confidently explain that this isn't so good for black because when black plays the intended ...e5, white will take on e5, exchange pawns on d5, and be well-positioned to attack black's isolated d pawn.

The book also talks about this position 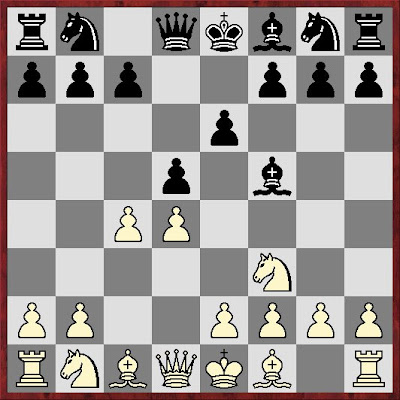 which a few of my students have been looking for some new ideas in.

Finally, the Slav sideline Wojt played is interesting: 1. Nf3 d5 2. d4 Nf6 3. c4 c6 4. Qc2. The idea is that if black takes, white just recaptures with the queen, has an extra center pawn and tortures/ bores/ strangles black to death. It's the kind of position that, if you get good at playing, is just a goldmine, pointwise.

It's already a popular book in my chess club. Miguel ran into my room today yelling "WO WO WO WO WO WO" (he misremembered the name "Wojo"), wanting to borrow it. Miguel is 13 and doesn't like studying, so that means something. I'd definitely recommend it to Catalan players, or anyone who likes boring-but-really-well-explained-d4 openings/ systems.

On a related note, my dentist convinced me to get crowns put on my two front teeth. Crowns are where they drill away like 40% of your tooth, stick a rod into the root, and stick a fake tooth over the real one. This happened because I had a root canals in each of my two front teeth many years ago and since then they've turned grey. My dentist wanted me to look prettier.

They took an impression of my teeth before they drilled them away, and I go back to get the permanent crowns Thursday. When they put on the temporary crowns last week, they slipped them on and then asked if any edges needed to be filed down, or anything felt weird against my tongue.

This questioning gave me an idea. I'm going to ask them to sharpen my teeth before they put them on. Imagine having extra-sharp teeth! almost like a superpower! Some people (ok everyone) I've mentioned this plan to has thought that it's a terrible idea because I might bite my tongue.

please vote in my poll by 4 pm Thursday.

puzzles from the Dan Gross tournament 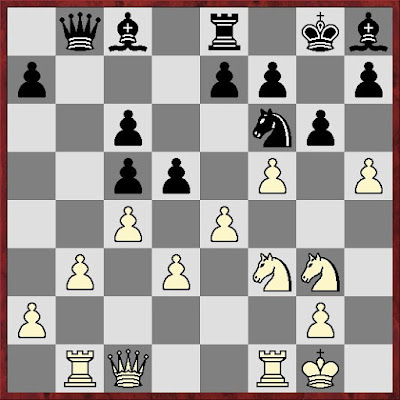 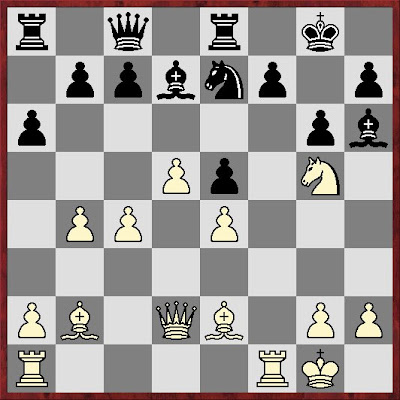 2. James Black is white and found the fastest win. 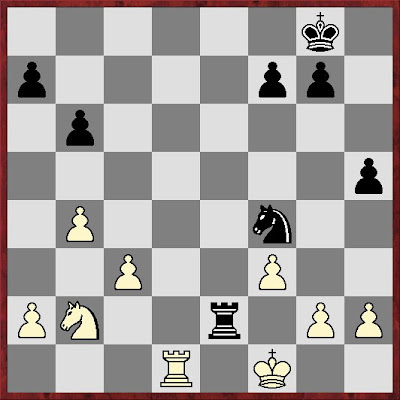 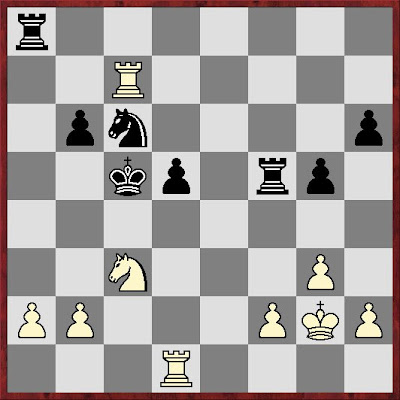 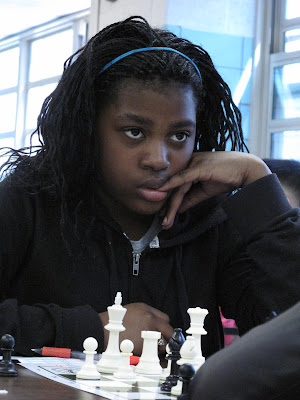 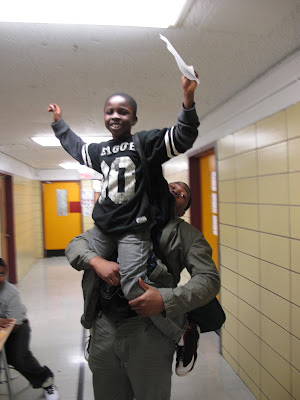 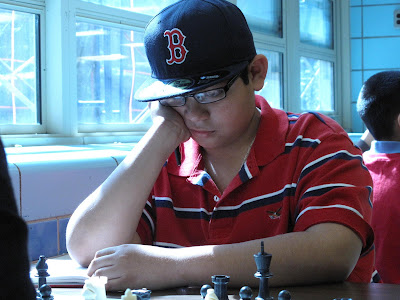 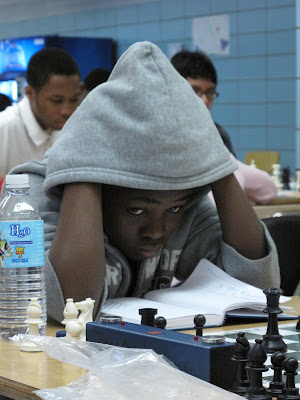 Danny and Joel agree to a premature draw

At the last Chess in the Schools tournament, my seventh graders played a quad rather than play in the actual tournament, for reasons of both space and quality. Joel and Danny both play the caro, and they semi-repeated a line from my game against Yaacov Norowitz in the USCL.

I played 8... Nc6 here, I believe I wanted to out-and-out sac a pawn and not deal with defending an IQP after 8... Bd7 9. Bxd7 Qxd7; I understand that that's maybe a little irrational of me. 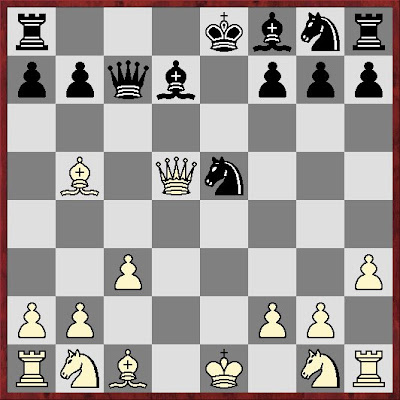 White shouldn't take. Black is much better now if he can find the right move, which is.... 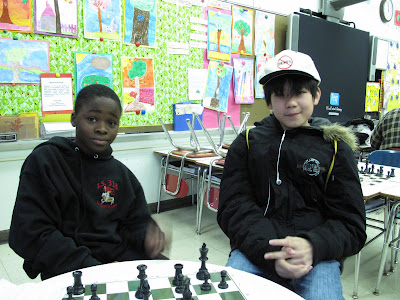 Joel and Danny analyzing the game with me. Black was much better, but then hung a piece, whereupon white immediately agreed to a draw. I made Danny wear the hat all day. 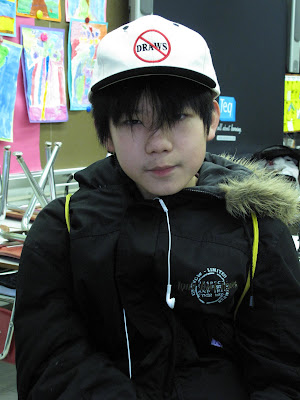 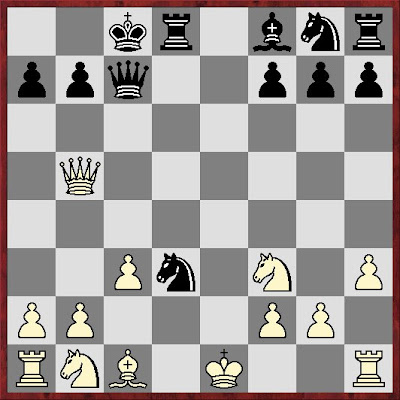 ps check out the pre-entries for the JH Nationals k-8 section. :)
Posted by Elizabeth Vicary at 6:52 PM 2 comments: 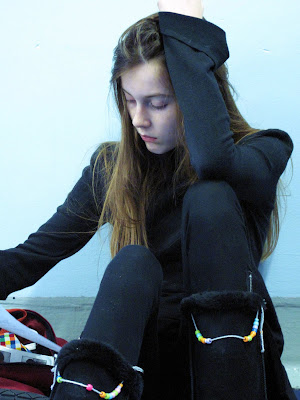 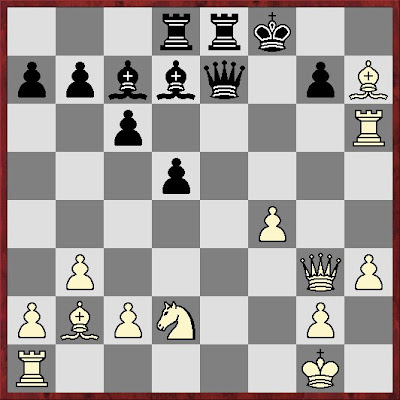 Anita was white in this position today after school against Henry Cali. What awesome move did she play?

want to be a MOVIE STAR? 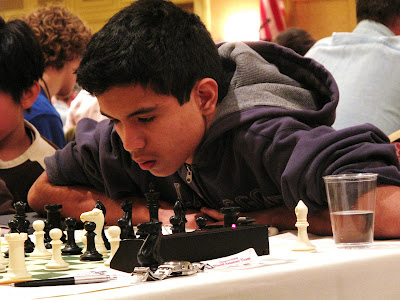 I'm looking for someone rated 2100-2400 to play a rated match against Alexis Paredes (2048), star of the in-progress documentary Chess Movie.* You would definitely be shown in the movie playing Alexis, and Katie would ask you some questions about the games afterwards (I can't guarantee the interview will be included-- probably depends a bit on what you say :) )

You would also be doing something really nice for a great kid.

Don't know what to do with that week off in March? 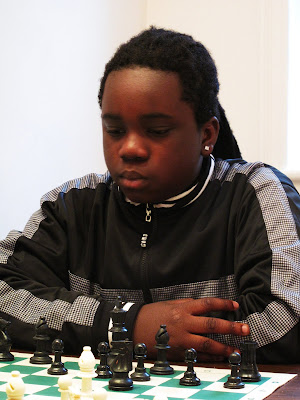 Why not go to North Carolina for the US Masters? You could play IS 318's own Justus Williams, plus there's free mini-golf*.

*You may not know this, but North Carolinian teenagers universally adore mini-golf.
Posted by Elizabeth Vicary at 10:41 AM 1 comment:

you have to be careful what you say on facebook

so I notice in Chesscafe's newsletter that Abby Marshall's column this month is on the Max Lange. Some of my kids play this opening, so I checked it out, and then, since I haven't talked to Abby in a while and felt a little bad because I hadn't called her back last time, which honestly was more about how much I hate talking on the phone, I really can't stand it, but ok she doesn't know that. also of course I was interested in her opinion on my earth-shattering novelty. Anyway, I leave this message. If you don't have facebook, it's

so what happens? some guy who friended us both but who I don't actually know copied our conversation to begin a thread on the chesspublishing.com forum.

How could I stop being the greedy, myopic scumbag they elected me to be?

It is my responsibility as an elected official to look out for the people back home, the voters who sent me to Washington. So, after 20 years representing Ohio's 8th District, I know what the good citizens of Montgomery, Preble, and Butler counties really want: someone who engages in the kind of calculated political gamesmanship that increases his standing in the Republican party while simultaneously hindering our country's legislative process at every conceivable turn.

I assure you, the last thing my voters need is some well intended, do-all-I-possibly-can-to-help-the-little-guy congressman running around Washington, working across the aisle, and fighting tooth and nail for jobs, health care, and financial reform to ensure their tax dollars never end up in the hands of banks capable of holding our entire economy hostage.

No, sir. My constituents deserve better.

They deserve a leader willing to roll up his sleeves and play the types of twisted, greedy political games that, by their very nature, tear apart the fabric of our democracy for the sake of assuring reelection. They deserve someone on their side who will ask the tough questions, such as how will painting Democrats as radical ideologues play in, say, Arkansas? Can we vote "no" on the health care bill and still make it look like we give two craps about the welfare of ordinary Americans? How can we twist positive news about the GDP into a negative for the Obama administration?

Trust me: If you talk to an unemployed, uninsured mother of two in Greenville, she'll tell you that jobs and reliable medical coverage come a distant second to the crafting of meticulous talking points that deftly omit the facts and reduce what should be honest discourse about our country's future to a series of contrived, easy-to-digest sound bites designed to sway crucial independent voters.

read the entire article here (please do-- very funny)
My sister gave me a Kindle for Christmas, and it's great. You can be on a bus in the middle of nowhere and browse the NY Times best seller list, get many many book samples as you want delivered to you instantly, read them, choose your favorite, and order it for $10. I've found that it extends my range of reading choices, especially nonfictionwise. Lately I've read Supreme Conflict: The Inside Story of the Struggle for Control of the United States Supreme Court, by Jan Crawford Greenburg, On the Brink: Inside the Race to Stop the Collapse of the Global Financial System by Hank Paulson, and Clean: The Revolutionary Program to Restore the Body's Natural Ability to Heal Itself by Alejandro Junger. I'm in the middle of an amazingly chilling book called Confessions of an Economic Hit Man by John Perkins. Here's an exerpt:
That is what we EHMs do best: we build a global empire. We are an elite group of men and women who utilize international financial organizations to foment conditions that make other nations subservient to the corporatocracy running our biggest corporations, our government, and our banks. Like our counterparts in the Mafia, EHMs provide favors. These take the form of loans to develop infrastructure —electric generating plants, highways, ports, airports, or industrial parks. A condition of such loans is that engineering and construction companies from our own country must build all these projects. In essence, most of the money never leaves the United States; it is simply transferred from banking offices in Washington to engineering offices in New York, Houston, or San Francisco.

Despite the fact that the money is returned almost immediately to corporations that are members of the corporatocracy (the creditor), the recipient country is required to pay it all back, principal plus interest. If an EHM is completely successful, the loans are so large that the debtor is forced to default on its payments after a few years. When this happens, then like the Mafia we demand our pound of flesh. This often includes one or more of the following: control over United Nations votes, the installation of military bases, or access to precious resources such as oil or the Panama Canal. Of course, the debtor still owes us the money—and another country is added to our global empire.
Posted by Elizabeth Vicary at 7:31 AM 7 comments: