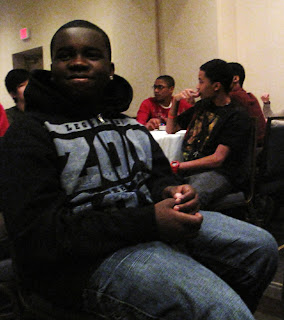 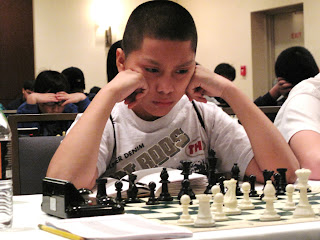 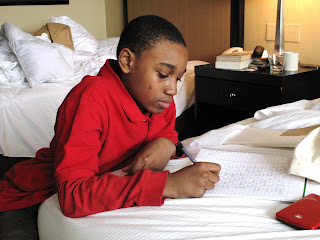 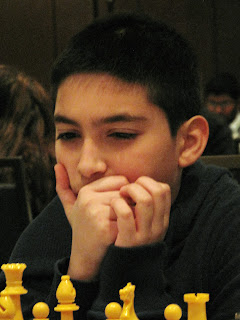 Aleem
I basically don’t do endgames with my kids, mostly because I believe you hardly get (nontrivial) endgames until you are 2000 or so, especially in the G/30 that my kids normally are playing. However, I have one kid, Randy, who goes into rook endings all the time and wins 95% of them. He’s really a specialist/ magician. I think I’ve learned more about technique in rook endings from him than from anyone or any book.
I had an idea for a charter school. It came to me at Amateur Team East, when I was yelling at my students for holding the North American Wrestling/Pillow-Fighting/Screaming Team Championships in room 539. I thought, ok, they can’t help it, they’re children who have been sitting still all day, so I took them to the exercise room. And then I thought: if I had a charter school, I would have mandatory forced runs for the first 90 minutes of school, and then when they are so exhausted they don’t even want to talk or fool around, then we have class. Also, they will not be obese.
How bizarre are the attacks on Michelle Obama for promoting healthy eating? It’s amazing: I’m starting to think even if her cause was cancer research, republicans would be saying “why is the government interfering in our lives?”  My favorite was Rush Limbaugh’s comment, “Our First Lady does not project the image of women that you might see on the cover of the Sports Illustrated Swimsuit Issue or of a woman Alex Rodriguez might date every six months or what have you." The first lady isn’t slutty enough?!
I’m reading a couple of interesting books: The Next Decade: Where We’ve Been and Where We’re Going (George Friedman) (I also enjoyed his earlier book, The Next Hundred Years), and The Emperor of All Maladies (Siddhartha Mukherjee), a very enjoyable history of cancer.
Nationals are coming up. I think we are taking a small contingent (8-10) to girls nationals (Chicago April 9-10). Then we will take 58-59 to junior high nationals. I have no decent teams in any under sections this year, but I don’t care at all. We used to win those sections all the time a few years ago, because Chess in the Schools used to send in their tournament results really really late. But when you think about it, winning an Under section just means you have the most under-rated kids in the country. congratulations. Maybe they are under-rated because they got a lot better between the cutoff for the rating supplement and the tournament because you are an amazing amazing teacher, or maybe they are under-rated because someone artificially kept their ratings low, but who really cares? Winning an under section is a nice personal accomplishment, I'm not taking away from that, it's a impressive feat to go 7-0 or 6-1 or whatever, I'm just saying it's of absolutely no national significance.
We’ll split the open section kids: put the top ones in the K-9 and the rest in the K-8 and see if they can win both. I'm proud to say we have 41 kids over 1250. Aside from obvious benefits of depth (someone can’t help but have an exceptionally lucky tournament), it also means I can do a lot more opening prep before rounds than most coaches.
We’ll also go to high school nationals, just the top 10 kids or so, and if I can convince Galvin that we have a decent shot of winning elementary, we might go to the k-6. My life dream is to win the elementary, junior high, and high school, all in the same year. I understand this makes me an egomaniac.
Posted by Elizabeth Vicary at 6:44 PM 11 comments:


for more info see the chess.com announcement or their website.
Posted by Elizabeth Vicary at 4:31 PM 5 comments:

I reorder a book

Some kid borrowed Forcing Chess Moves from our library a few years ago and didn't return it, and I really loved this book, so I ordered another copy. It arrived yesterday morning. 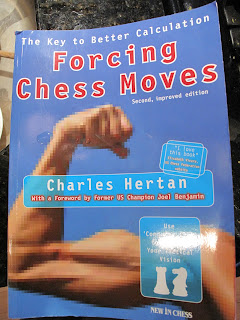 This totally made my day. I carry the book around now and look at it every few hours.

My students mostly couldn't see anything unusual at all about the cover at first, but after I pointed it out, they were like "Miss! How did you do that??"
Posted by Elizabeth Vicary at 7:03 AM 12 comments:

an amusing miniature and even more puzzles from Saturday

An amusing miniature from Kenneth: 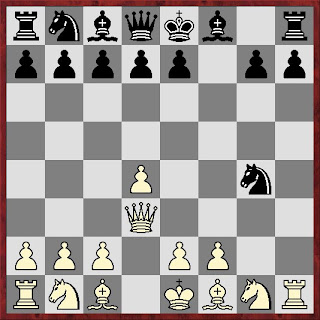 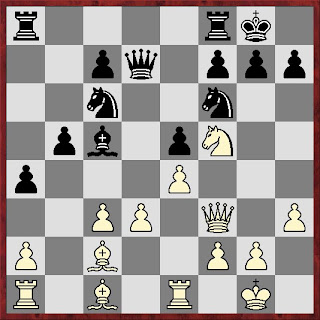 1. Kevin Marin is white and has a fabulous move. I found this immediately in analysis because I once read the book Essential Piece Sacrifices, and this move is a whole chapter. 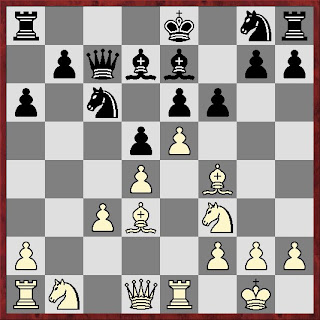 2. Randy Rivera is white. His opponent captured on e5; how should he recapture? 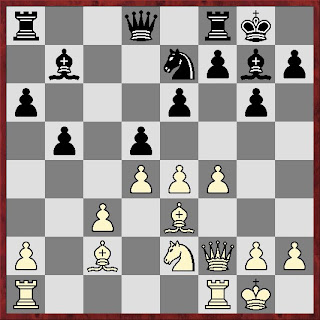 4. Not quite a tactic, but an instructive position to think about and decide where you would move as white.
(from Carlos Tapia's game) 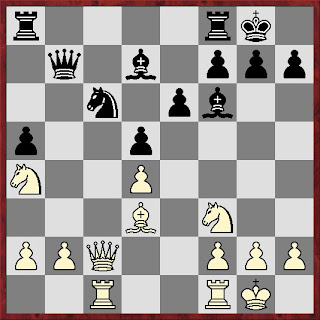 5. Carlos is black here against Ashanti Murray. What is white's best move? (be careful!!) 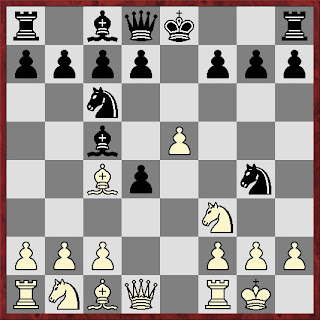 1. Anthony (white) has been studying the Max Lange, and here he played an exciting "318 theory" sacrifice to generate play. 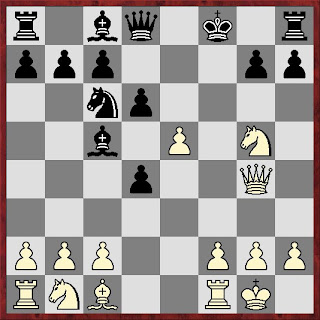 2. This is his position a few moves later. How did white force checkmate? 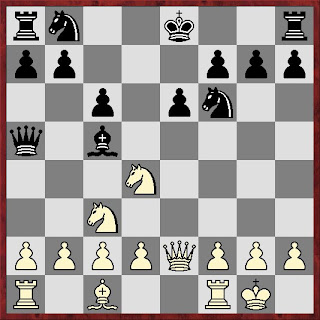 3. Zion McKenzie was white. What should he have done? 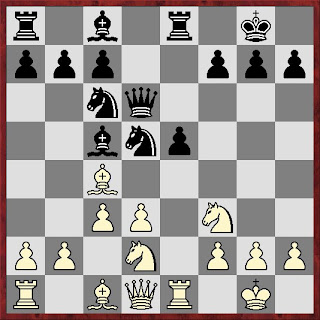 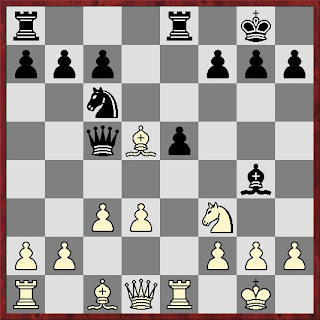 5. Later in the same game, Carlos finds a nice tactic to win even more material and simplify the position. 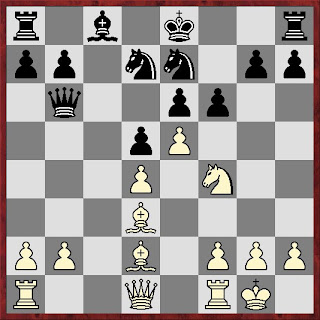 6. 318 alumnus and assistant coach Pobo Efekoro showed us a beautiful tactic he played against Ashanti Murray at the city championship 2 weeks ago. White to move, above. 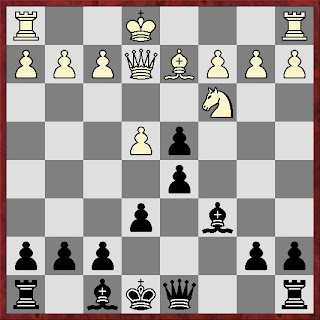 7. Spike Smith was thrilled to win the Junior High Novice section for the first time. He is black in the above position, and his opponent failed to find the best move with his Nc3. Where should white have gone? 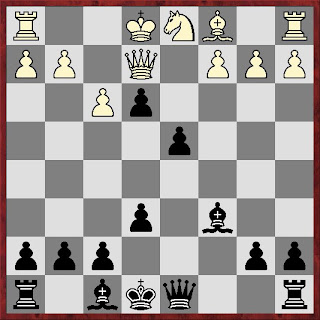 8. Same game, a few moves later. What is black's most crushing line? 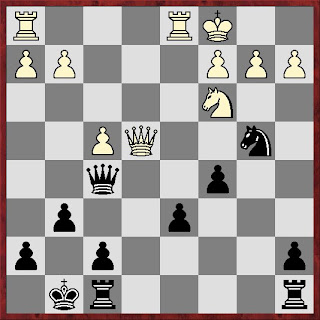 9. Ariel Peguero was white in the above position. How could his opponent have won a pawn? 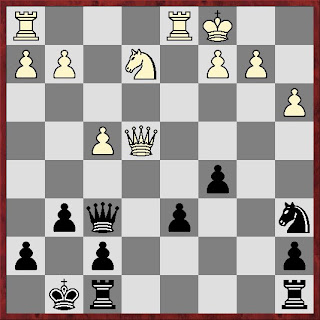 10. This time it's Ariel's turn for a tactic. White to move. 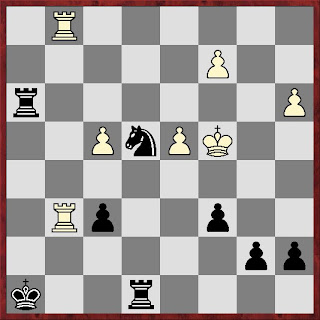 11. Kevin was black in the above position. How can he set up an UNSTOPPABLE CHECKMATE?

I'm good. My life is pretty much totally about work from September to May every year. I work from 7:30-4:15, come home, grade some papers, eat dinner, watch the daily show, read, and go to bed by 9, Monday - Saturday. Sunday I either see my mom, or we see Jonathan's parents, I usually do some more work, post the positions from yesterday's tournament, and I try to do something with Jonathan. I'm very happy, but man, it's a lot of work. I've been really enthusiastic about working with some of the 6th graders this year, and that's kept me energized, but I had a rough week. I need to read a book on positive behavior management.

I am excited about some reservations I have. Normally, I'm not really a foodie. I like fresh, healthy food, but I don't care enormously about the upper ranges of tasty. But NYC Restaurant Week has been extended through Feb 27, through my midwinter week-off break, which frees me to take advantage of the attractive Lunch Option. Many of the fanciest restaurants only participate at lunch, plus it's cheaper. Tuesday we are eating at Nobu and Wednesday at Le Cirque!

I decided to take 4 kids to Amateur Team East. Shaun Smith was kind enough to transfer an extra reservation to me, and so I'm bringing four awesome, awesome children with me: Randy, Kenneth, Carlos and Kevin. These four kids have been working so hard recently on chess-- I don't think the last two have missed a single day of early morning class, chess lunch, afterschool chess club, and Saturday tournaments all year (!!). Kenneth has gone from 1459 to 1730 since September, Carlos from 1093 to 1402, and Kevin from 0 to 1319. I wasn't all that pumped about USATE before this (although my team should be fun-- Laura, Abby, and Alanna), but now I'm so happy thinking about how great the kids will do and how much fun they're going to have.

We're taking a bus to Junior High Nationals in Ohio! It's an ugly 11 hour trip, but it means we'll get to take 55 people (4 adults, 51 kids), plus a small group will fly, so despite the budget problems, we will have a full contingent of 58-60 kids there, all the ones who have earned it! I'm not counting on winning any under sections, but we'll put the top 5 or 6 in the K-9 and then like 35 kids in the K-8 open from 1250-1800. I'm really looking forward to this. (and to it being over, so I can regain a toehold on normalcy)

This time, the revolution will be televised.
Posted by Elizabeth Vicary at 6:24 PM No comments:

the Marshall party for Justus Williams!

Friday night, the Marshall gave a party for Justus Williams, to celebrate his breaking the record for youngest African American master. He made 2200 at 12 years old, breaking Kassa Korley's record of 15.