Noah gets his first chess lesson

We discussed the names of the pieces and which he likes (he dislikes the knight and likes the "little tiny pawn," consistent with his love of small things). I explained that chess is a game and one of my favorite games, and that you play by moving the pieces around from one square to another. We practiced that. We agreed to take turns. I told him about taking pieces, how to do it, and that you get to keep the piece. 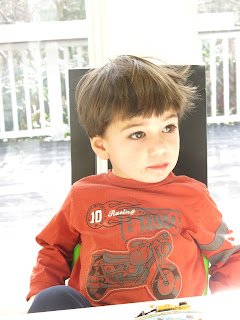 After the lesson, it was nap time, and he took a pawn to bed with him.

Have Respect for Mattresses, Citizens!

That's an excerpt from a very funny comic Russian novel Twelve Chairs,
which you can read online.

Recently, Jonathan and I attempted to buy a mattress.

It's always been my dream to own a king sized bed. Plus Zoe sleeps with
us and Noah manages to as well sometimes. (i.e. we need it).

In 2001, I bought my sister a Tempurpedic mattress as an engagement
present. She's always loved good bedding. She didn't end up marrying
the guy, who was an inventor and invented the blue ink in American
Express Blue cards and made fake passports for the CIA, and she didn't
like the mattress either (too firm), so she gave it back to me and I'd
been sleeping on it ever since.

Posted by Elizabeth Vicary at 10:31 AM 3 comments:

Hello out there!
I made a big decision recently that I'd like to tell you about. The last year and a half I've been staying home with my now two kids, Noah (2) and Zoe (5 months). 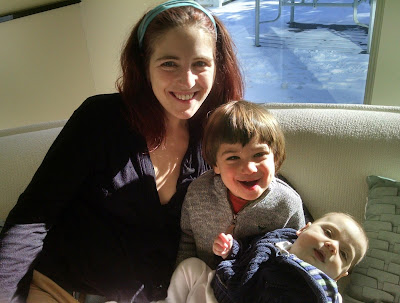 At first I was super-enthusiastic about this project, determined to raise the smartest, most verbal, best-fed, sweetest-natured children ever made. I talked to Noah incessantly, keeping up a running narration of everything I was doing in order to expose him to the absolute maximum language possible.  but after a while it gets very tedious. you get sick of talking, sick of mops and trucks and dinosaurs and garbage or whatever your kid is obsessed by 24 hours a day. also I spend a lot of time doing laundry and changing diapers and picking up toys and cleaning the house. and I don't mind housework per se, I actually have grown to kinda like it, especially the clean warm orderliness of laundry, but I'm SO BORED. I avoid my friends because I know I'm a conversational black hole.  I reread old blog posts and miss myself.

So I made plans to put them both in a local Montessori school next September and return to teaching at 318. I miss 318, at least parts of it: my advanced classes and the Saturday tournaments. Also I miss the long overnight trips. (I'm going to elementary nationals this year with another school and I can't wait-- 5 days of nonstop chess analysis without my children sounds like a dream.) I feel in some way that I belong at 318 and do a lot of good there.

And then Jonathan asked me to stay home another year with Zoe-- to put Noah in preschool 9-3 5 days a week and just take care of her, the house, and Noah after/ before school. He asked me like its a favor.

At first I thought no, I need for myself to be working outside our house for my own mental health. but then the next morning I was pushing the double stroller through the park on an unseasonably warm sunny winter day and we stopped and Noah got out to play chase with a puppy, and amidst the squeals of joy I thought "of course it's glorious to have another year off to spend with my children. How lucky I am." And so I cancelled Zoe's enrollment at the Montessori school, committing myself.

I'm still going back and forth in my mind. On the one hand I think we'd be stretched very thin as a family if we were both working. The house would never be clean and the dog would not get dewormed and no one would eat anything but takeout and toast. 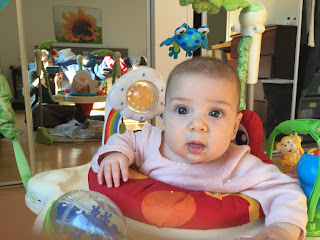 Maybe with just one kid to watch I can blog and go running and maybe even play chess.
and if I was working, I'd be staring through my window, wishing I could be with my kids.