a new font for dyslexics:

"Recognizing that dyslexics tend to rotate letters as well as mix them up, Dyslexie incorporates numerous features to help keep such problems from occurring. Letters are made to look heavier at the bottom by virtue of thicker lines, for instance, making it easier to recognize their true orientation. The differences among letters — such as their openings, extensions and slant — are also exaggerated to make distinguishing them easier. Capital letters and punctuation, meanwhile, are rendered in bold to make the beginnings and endings of sentences more clear. The result of those changes to Dyslexie’s letters, as well as adjustments to the spacing and layout, StudioStudio says, is better reading, confirmed by independent research results."
more here

Also a program to get your kids to do chores: highscorehouse where they get points for making their bed or feeding the dog.
Posted by Elizabeth Vicary at 8:20 AM No comments: 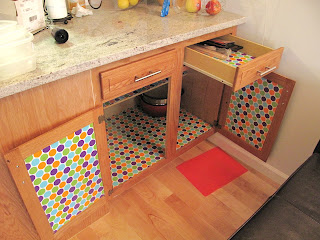 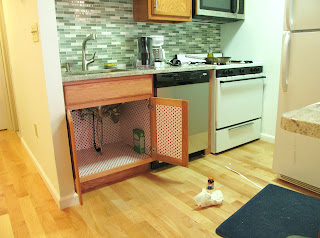 I decided to line the insides of the kitchen cabinets with wrapping paper and rubber cement. I ordered fancy decorative paper to do the rest of the cabinets/drawers. 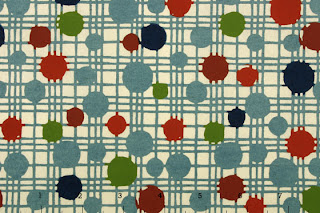 Posted by Elizabeth Vicary at 11:28 AM 6 comments:

NYC is publishing its teacher data reports today for 4-8th grade English and math teachers who have taught at least 2 years out of the last 4. Diana Ravitch and Bill Gates object.
The problem with releasing teacher ratings is that, at least in ELA, the worst kind of teaching makes test scores increase. One teacher at my school, for example, only teaches test prep. Everything students read is a 1.5-2 page uplifting historical biography of a female or racial minority who invents something or explores somewhere and demonstrates incredible pluck and anachronistic open-mindedness. Every writing assignment is a short paragraph response to these biographies that restates the question and includes at least three supporting details. The kids, of course, hate the class and are learning to hate reading and writing. But I'm sure this guy's rating will be high. Other teachers in my school teach novels and assign research essays and writing poetry as homework; one of the very best (I observed his class when student teaching so I know first-hand that he's amazing) has a rating in the lowest quarter.
I am willing to believe the math ratings are meaningful (at least in the last few years, after they moved the tests from January to April), but the ELA ones are a complete joke.  If I had a child in the system, I would look for a teacher with a very low "effectiveness."

Personal note: I taught English for only one year, 4 years ago, so my test-teaching rating exists but will not be released. I am told that in a few years my chess teaching be evaluated using a similar 60% classroom observation / 40% value added model, with ratings instead of test scores used to determine what "value" I am "adding" to my students. This is welcome news, since ratings are a legitimate assessment tool.
I would add that I'm not super liberal about education: I am absolutely against tenure and think firing bad teachers should be much easier. I think measuring teacher effectiveness is extremely important. I loved standardized tests as a student and did very well on them. But the state ELA tests are not good assessments and the grading of the subjective portions of them is ridiculous: inconsistent, unreviewable, unappealable and completely opaque.
Posted by Elizabeth Vicary at 8:54 AM 9 comments: 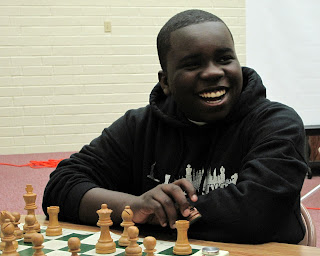 Watch the video clip here.
Posted by Elizabeth Vicary at 8:00 AM No comments:

did you know elite chessplayers are more likely to be born in late winter and early spring? also schizophrenics.  I'm too cheap to pay the $45 to actually read the article, but I found a Gobet powerpoint where he describes the finding as "56.9% vs. 43.1% for players above 2500," whatever that exactly means. The abstract describes "explanations ranging from purely biological to purely environmental," which I guess means sunlight/vitamin D exposure in utero vs. the impact of the age cutoff for the World Youth being your age as of Jan 1 (a la Malcolm Gladwell's Canadian hockey players)?! please comment.

I was surprised to come second in the CLO contest, as I'd forgotten I'd written anything. Jenn points out that I've come second the last four years. I need to step up. 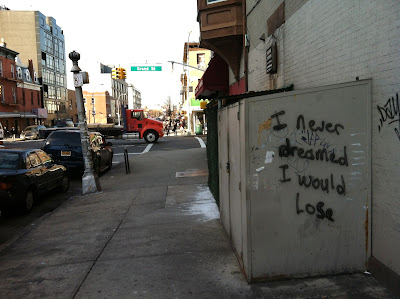 Brooklyn Castle will premier next month at the film festival South by Southwest!  I'm thinking about going, if it's on a weekend. I like the new short trailer a lot, and especially the theme song.

I came across some old Regents homemaking exams. quite amazing.  a sample:

6. When Gordon's aunt called him back for his raincoat, he asked "Why? It is not raining!" His aunt's best reply would have been
a) "Because I told you to"
b) "You know your mother would want you to have it with you."
c) "It looks very much as if it is going to rain."
d) "Because you look so well in your raincoat."
e) "Put it on dear, just to please me."

there is a surprising lot of technical knowledge tested. but it's funny how the entire subject seems pretty useless now. I guess that's what google does to knowledge.
I'm enjoying the BBC series Sherlock. It's set in the present, texts instead of telegrams, the plots are complicated and clever, well written and acted, I'm really enjoying the show. Sadly, there seem to be only 3 episodes (but each an unusually 88 minutes long).

I'm looking forward to bringing 30 students to Amateur Team East. It is the most social weekend of my life.

After that, the state championship, the long month of March, high school and junior high, and then summer. I need to start thinking about what I want to do/ where I want to go this summer. any suggestions?
Posted by Elizabeth Vicary at 4:24 PM 5 comments: