we had a good weekend


IS 318 won clear first in the National Junior High School Chess Championships, in the K-8 and K-9 Open sections simultaneously. James Black tied for first in the K-8 Open and won on tiebreaks. Danny Feng tied for 3rd and placed 6th with 6/7; David Kim and Rashawn Williams placed 9th and 12th with 5.5/7. Shawn Swindell finished 11th in the K-9 with 5/7.

IS 318 also won the Under 750 section with 24/28 points, and Mubassar Uddin and Jiayu Tang shared first individually with perfect scores. Jiayu only got to go to Ohio because we had two extra seats on the bus and Galvin told me to pick the two best kids from my early morning class. :) This was his 4th tournament.

IS 318 won the blitz team championship by 9 points. James Black won clear first with 11/12 and Justus Williams, Joel Ogunremi, and Danny Feng were half of a 6 way tie for second place with 10/12.


more photos here. I should have some games and positions later this week.
Posted by Elizabeth Vicary at 6:24 PM 6 comments: 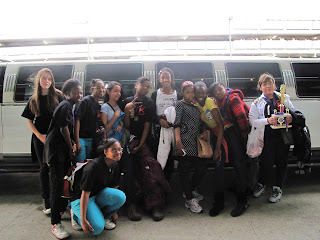 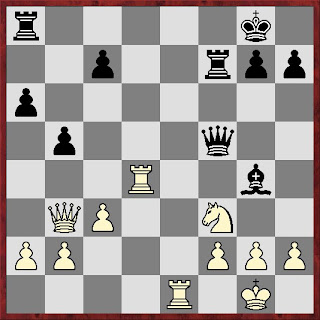 Jamye Moya (white) has a CT-Art-like problem in her 4th round game against Taylor Cogshell.
more photos here
Posted by Elizabeth Vicary at 11:49 AM 10 comments:


After 3 rounds, we are leading in the 2 sections we are playing in: 12 and under, and 14 and under. ﻿results here. I sit in my hotel room and analyze chess all day. Some of the girls are really playing quite well, and most of them are working hard at the board, so I am happy. I had two tempting offers to experience the nightlife of the windy city, but I'm so exhausted, I can't. I know that next weekend (62) will be much much worse than this one (11), and that fills me with fear.

help finding a chess board that changes color/ shows moves?

I saw something on the internet a while ago: a site with a chess board you can play that changes colors of the squares to show move possibilities, but not in an instructional way, in an arty way.  If anyone has seen it, I'd really appreciate a link. thanks!
Posted by Elizabeth Vicary at 7:33 PM 2 comments:

Irina Krush gives a masterclass at IS 318

IM Irina Krush was kind enough to come to 318 today and teach an excellent lesson on improving pieces to a specially-convened class of top students. She leaves to play in the US Championship on the same day we leave for Junior High Nationals! good luck to us both! (shouldn't the fantasy contest be starting?? I get all my students to enter as class projects so they care when we look at the us championship games. It's awesome because we win some books and prizes just through sheer numbers.) 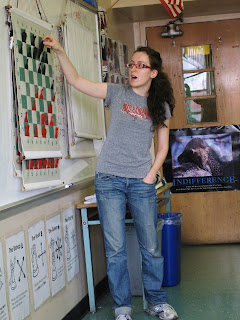 Many thanks to Irina for generously volunteering to her time! 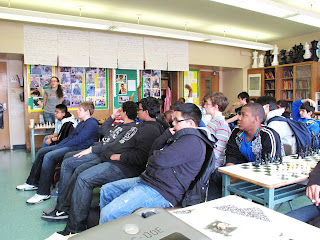 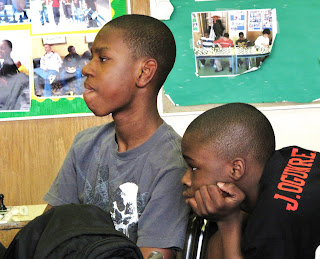 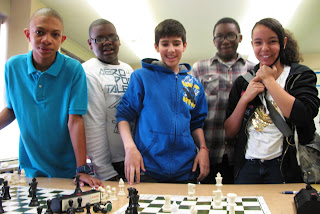 This was earlier in the day, when Rashawn, Kenneth, Isaac, Avery, and Jamye from my seventh grade class are showing me their answers to Final Jeopardy. The Final Jeopardy (from Nationals Opening Review Team Jeopardy) question was "Place 2 kings, 2 queens, 2 rooks, 2 bishops, and 2 knights on the board so no piece attacks another." (from Coakley)
Posted by Elizabeth Vicary at 7:01 PM 1 comment:

I love some of Jeff's recent videos. See more here.


Shredding The Center from Jeff A on Vimeo.


Queen's Gambit Accepted 2k10 from Jeff A on Vimeo.
Posted by Elizabeth Vicary at 7:23 PM No comments: