Kids love knights. I find myself reminding students 10,000 times a year that bishops are usually better than knights, and they need to have a good reason to trade a bishop for a knight. To overcome their natural tendency to favor the knight, I like to give a lesson directly on the subject.

So what is a good reason to trade bishop for knight? Most of the time, you should either be
1) winning a pawn,
2) opening up a king (in a situation where it's realistic to attack) or
3) creating a real pawn weakness that you can attack.
It's also ok to trade if your bishop is bad and you have no good retreat square for it.

Of course, there are some situations that don't fall into these categories, but I make it clear that students are responsible to me for having a good reason.

I explain to the class that I'm going to give them 8 positions and they have to tell me if white should trade the bishop for the knight, or not. Notice that in most (5/8) positions, the answer is simply no, you should not take the knight.

Here they are: (or here if you'd prefer a cbv file) 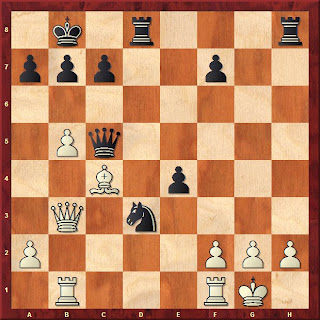 my favorite lessons 4: winning up a pawn

I stole this from an endgame book, I'm sorry I don't remember which one. The idea is to give students a roadmap for how to win a simple minor piece endgame when they're up a pawn. Obviously, this is not so simple, and so your objective is not that they win 100% of the time, or even 75% or any particular % of the time, but more that they have an idea of the method and get some practice at it.
I start by showing them a position 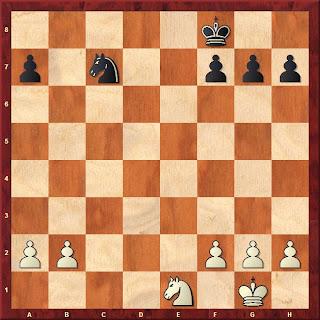 having a student tell me the material, and asking who thinks they could win this as white. (it doesn't matter what the answer is). I then ask who can explain to me what the plan is.
The plan is this:
1. Centralize the king (I explain that you activate pieces in the endgame in the order of their power, i.e. queen first, then rook, the king is worth 4, so king next, then bishops and knights, and generally only after these pieces are activated do you start pushing the pawns.)
2. Activate the knight
3. Make a passed pawn by pushing the pawns on the side you have a majority.
4. Once you've done that, the side with the extra pawn usually wins by some combination of:
a) pushing the passed pawn and invading with the king
b) trading knights
c) sacrificing the passed pawn to win the kingside pawns.
Make sure this is written on the board so students can refer to it later while they are playing.
I then ask for a volunteer to start white out by doing #1, centralizing the king. I move for black, and we play through the following moves:
1.Kf1 Ke7
2.Ke2 Kd6
3.Kd3 Kc5
I then ask for another volunteer to take over and activate the knight:
4.Nc2 Nd5
I ask what this threatens (Nf4+ winning a pawn) and how white can stop this:
5.g3 a5
Here I ask which pawn to push first, and if they don't know, remind them of the general rule that you push the potential passed pawn first, in this case the b pawn:
6.b3 f5
7.a3 g6 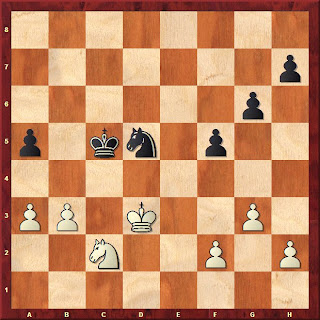 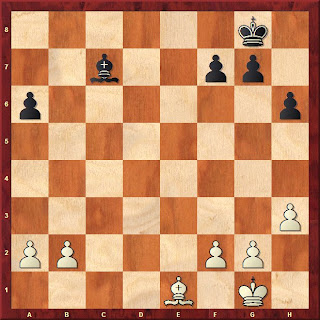 which you will notice is exactly the same, but with bishops instead of knights. I ask students again how many think they would win the position, and hopefully a few more students raise their hands than last time.
I then ask what the basic plan is, and of course its essentially the same:
1. Centralize the king
2. Activate the bishop
3. Make a passed pawn by pushing the pawns on the side you have a majority.
4. Once you've done that, the side with the extra pawn usually wins by some combination of:
a) pushing the passed pawn and invading with the king
b) trading bishops
c) sacrificing the passed pawn to win the kingside pawns.
I again show students a model game; you can also have them play first and show them the game afterwards, but I find with difficult lessons like this, many classes benefit from as much teacher-modeling as possible before they do it themselves. They play much better and are more likely to be successful if they see exactly how you do it first.
I ask for a volunteer to help me do step 1:
1.Kf1 Kf8
2.Ke2 Ke7
3.Kd3 Kd7
4.Kc4 Kc6 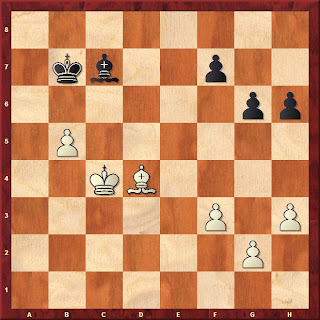 and again, don't get too worried about covering every detail of the rest: like every endgame it gets a little messy and there are many possibilities for each side. What's below are just examples!

Now again, return to the original position, have a student repeat the basic plan, and send the class off to practice. Circulate and watch: the most important thing is to catch players who aren't following the basic plan. Don't worry too much about showing kids every forced win that they miss: it's a difficult position and you don't want to undermine their confidence. Keep in mind that your goal here is to give students a basic plan to follow, not to police their endgame technique. 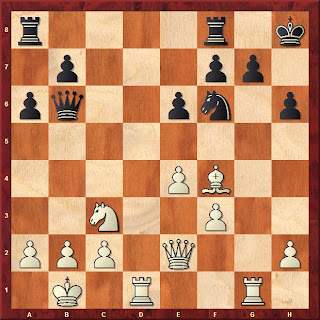 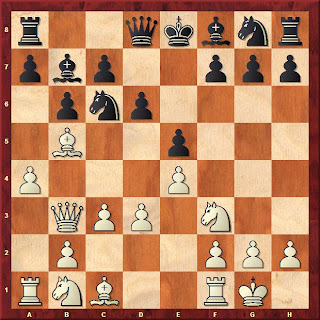 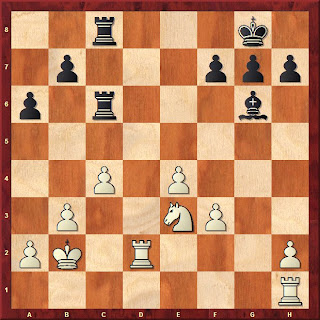 Threats include
Tell students that in their games, they need to try to make as many threats as possible, and to show you when they make a good one. Write down the position in the best student example and use it as a review at the very end of class or the beginning of the following one.
Posted by Elizabeth Vicary at 6:53 PM 3 comments: