hi everyone,
School started last week. I was nervous about it, because in June when it ends I'm always tired and disspirited and convinced I'm unfit to be in a classroom, but so far it's going much better than I remembered. The genius 8th graders have graduated, making me suddenly the best player in the school again. I had not realized how intimidated I had become.
I also did a lot of prep over the summer, and that's meant I've felt on top of things, even when I have to juggle nine classes and multiple learning groups in each class. I've also become better about automating homework, so 4 classes have a standing assignment of 20 correct chesstempo.com problems per week, which makes my grading life 10 times easier. I've pre-made a unit on the (advanced) characteristics of each piece, and so I just turn on the projector, click the forward arrow, and start talking. I'm using Johan Hellsten's Mastering Chess Strategy for my 8th grade class, and it's going beautifully. Greg says he disagrees with much of the book, accuracywise, but I don't care.
My early morning class is awesome this year: 20 kids, all rated between 500 and 1450, totally enthusiastic, and I have them all 5 periods a week, and most of them 8. If we don't win the k-6, I'm a total failure as an educator.
I destroyed them all at bughouse this morning. (Friday mornings, 7:30-8:20 is the only time that bughouse is ever allowed in my room, but I agree it's really fun.)
The funny thing is that Greg's team, Masterman, will probably be our main competition this year, as we'll probably both choose a section to avoid the unstoppable-looking Cameron Wheeler team. We were talking last night about sharing a team room and coaching each other's kids through the tournament, which would be hilariously strange, and only conceivable with Greg, or possibly Matan. :)
I'm managing the New York Knights, which is fun. So far, we seem to be underperforming, but I don't care, so it's fine.
I saw my sister recently, and she took me to a Chinese supermarket near her house, where I saw things I had never seen before:


If I had brought a backpack, I would have gone shopping-crazy, but I did not.

I have been thinking about teacher evaluations recently, what with the Chicago strike and all. These are my conclusions:
1) Cheating is an enormous problem. A freakonomics podcast looked at elementary schools in Chicago and found 3-5% percent of teachers cheat. Let's say it's 4%. In general 5th grade teachers are more likely to cheat, because if 4th grade teachers cheat, they penalize their friends, the 5th grade teachers in the same building. But when 5th grade teachers cheat and the kids go on to other middle schools, the teachers don't directly deal with the consequences and are also less likely to get caught because classes are broken up and the kids are dispersed more randomly. The kids that these 4% teach are scattered into different middle schools, so lets say an average of 2.5 dispersal rate, or 10% of 6th grade teachers are affected.
Let's agree that it is absolutely impossible to raise the score of a child who has been helped. I had a girl in my homeroom last year who had a perfect score on her 5th grade ELA test. Then she scored a 2 (out of 4) in 6th grade. She was a nice girl, but slow. There is no way she was not helped (also she told me she was), and there is no way her 6th grade teacher will not be judged a failure.
This means that the top 4% and the bottom 10% of teachers are not accurately rated. In fact, the best teachers are probably cheaters (nothing is more effective than a teacher taking the test for you) and the worst teachers are probably victims. That means that evaluating, rewarding, and punishing teachers based on test scores is probably 100% counterproductive.
2)     Ok, let's say you could fix that, I'm prepared to accept that evaluating math teachers on a standardized test is reasonable. But evaluating English teachers on a multiple choice test is silly. There is no way to measure good reading and writing instruction on a multiple choice test. It just doesn't make any sense.
3) Aside from that, the tests are terribly written. The first time I took the 7th grade ELA test, I scored abysmally, almost failing, despite getting a 1560/1600 on the SAT and a 2340/2400 on the general GRE. So many questions were ambiguously worded or totally nonsensical that I could not understand even what answer the test writer wanted me to give.
English teachers should be evaluated on aggregate student work. If you can get a class of 30 kids to write 8 good essays each, 1 per month, you are doing a fine job. There should be someone in every school who spends one period a week reading the writing that each class produces and grading the teacher on the results, taking into consideration, obviously, the background and ability of the class. Stop paying Houghton Miflin billions to write nonsensical tests, and hire some retired ELA teachers to give their professional opinions. That way, if a teacher helps her kids, it's actually instructive teaching, not cheating.
Posted by Elizabeth Vicary at 6:01 PM 17 comments: 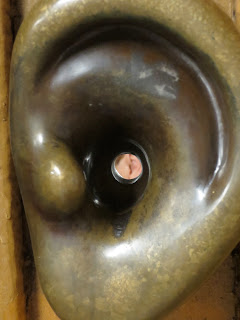 well done to Jonathan for taking this "double ear" photo in the 14th St. ACE station!
well done to me for being called a good teacher in the NY Times!
Posted by Elizabeth Vicary at 4:21 PM 9 comments: