My enigmatic and brilliant friend Donny is writing a new blog. I thought at first it was going to be about his return to the grindingly real world from virtual life in poker stars, but I'm no longer so sure of that. 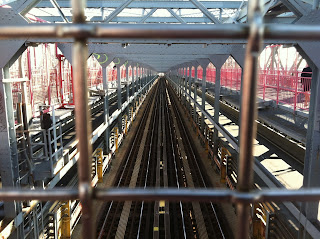 I went running this morning over the Williamsburg Bridge, turns out to be very inspiring to run over a bridge towards the city, and took some photos with my iphone.
Posted by Elizabeth Vicary at 1:05 PM No comments: 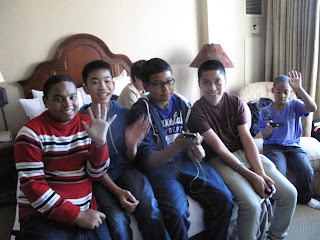 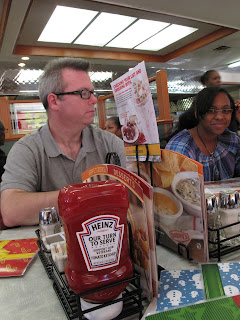 Dennys with Mr. Galvin and Maya 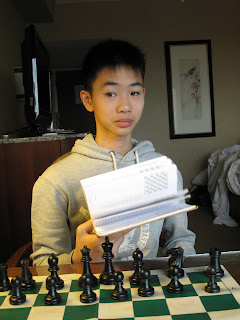 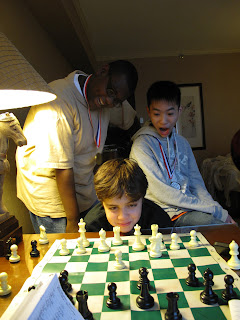 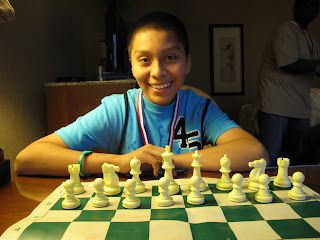 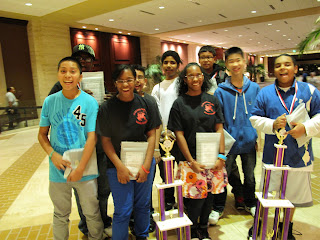 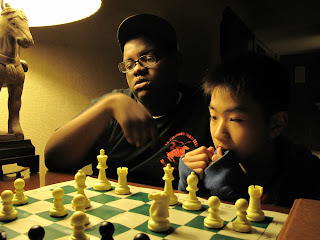 Kenneth and Jack enjoy a post-tournament lesson from Matan
We came 1st in 8th grade, 2nd in 7th grade, and 5th in 6th grade. I was overall very disappointed in the quality of the kids' play, but it showed me that I need to spend much more time teaching middlegame planning. There were some fine exceptions, like Isaac who scored 5/7 and placed 8th, and some games of the 6th graders, who had moments of hard work and thoughtfulness.

I talked to my classes today about Quinton Smith, the 11th grader who fell/jumped to his death at the tournament. He had been an honors student, interested in law, theater, tennis, and was in the choir. He was one of 2 kids representing his school, and he went 0-4 and jumped off the roof. I assume his tournament performance had something to do with his death: that he was used to being smart and successful and just couldn't take the frustration and pain of so much losing.
We (my classes and I) had talked a few weeks ago about decision making, and specifically about what a mistake it is to make decisons when you're upset. The conversation started when we were looking at Tristan's game from this blog post, where he blundered, horribly and uncharacteristically, in the end because he'd been upset at his earlier mistakes.  We talked then about how frustration can lead you to make decisions quickly and can blind you, and that it's important to try to recognize when that's happening.

I told the kids I wanted to revisit this idea today, in light of this tragedy. We talked about how when you feel emotion very strongly, whether that emotion is self-hatred, or anger, or frustration, that you can feel it so intensely that you want to act on it, you want to do something.
But that one of the big lessons of chess is that being emotional makes your decision-making worse. That chess is like a training ground for making decisions in life, and for looking at how you make decisions and when you make mistakes and what causes them. And that they have to try to apply what they learn from chess to bigger choices: that when you feel angry and you want to curse someone out, or break up with someone, or quit the baseball team, or hit someone, smash something, kill yourself, that you have to at least give yourself time to calm down.
Posted by Elizabeth Vicary at 2:31 PM 10 comments:

Masters of the Game, and Leaders by Example

A great article about James, Justus, and Josh, from the NY Times
Posted by Elizabeth Vicary at 8:50 AM 1 comment:

I'm rooting for NEST-M in the 3rd and 4th grade sections. It's Matan's first year managing the program there, and he has good chances to win two national championships after 3 months.

What I'm really curious to see is if the nationwide shortage of adderal affects certain teams. I notice some usual contenders have an strangely low number of pre-entries. A flabbergasting 5% of children aged 6-12 take a stimulant (an amphetamine) to treat their ADHD. I suspect in the insanely competitive scholastic chess world it might be somewhat higher.

Katie and Brian will be there, showing Brooklyn Castle. I'm interested to see how people react to it. Release-wise, they are waiting to hear if it makes Sundance, whichh should be announced around thanksgiving.

I'm watching the republican debates avidly; they're like an ongoing reality show: exaggerated, typecast characters, scripted conversation pretending to be spontaneous (Does Perry ever respond to the question he was asked?), each episode having a character shine or crash and burn. I wish Jon Huntsman was just a little more articulate or Ron Paul was a little less crazy or Gary Johnson was invited.

Today's NPR show, "Wait, Wait, Don't Tell Me" had a fun game called "Bunga Bunga Bunga or Nine Nine Nine," where you have to decide whether each quote was said by Silvio Berlusconi or Herman Cain

1. Here's what Cain or Berlusconi said when asked if he was faithful to his wife: "I am pretty often faithful."
2. Which of the two said this? "I have little hair because my brain is so big, it pushes the hair out."
3. Cain or Berlusconi says this a lot, this phrase about staying strong in hard times: "A poet once said 'life can be a challenge, life can seem impossible, but it's never easy when there's so much on the line.'" That sounds good but what makes it a significant quote is that the poem he's quoting was, in fact, the theme song to the Japanese animated film "Pokemon: The Movie 2000."


answers
1. CHARLIE PIERCE: The problem is the sentiment is Berlusconi but the syntax is Cain.
SAGAL: Yeah.
PIERCE: So absent the accent, I'm going to say Berlusconi.
SAGAL: Berlusconi, well done, that's who it was. He's pretty often faithful. It's a good spin. That may be where Cain got the idea for his one in a thousand defense.

2. Of Berlusconi's many problems, this is one of the few he can blame on his brain.

3. It was Herman Cain. He became the first candidate since Gerald Ford to quote Pokemon in a presidential debate.

the date that most resembles corderoy, EVER 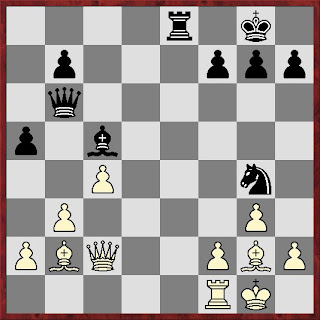 Black to move. Jack Wen is a genius. 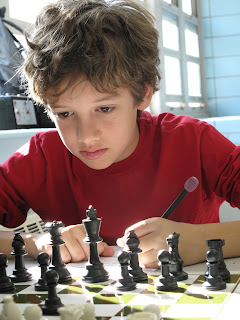 Amyas
*you have to write it like that (instead of with /) for obvious reasons
Posted by Elizabeth Vicary at 4:47 PM 2 comments:

how my bulletin board is looking so far 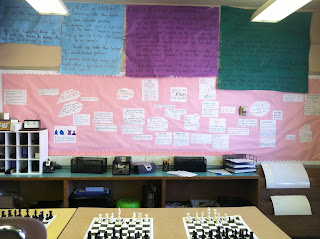 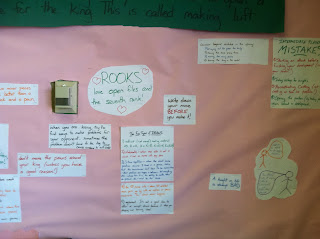 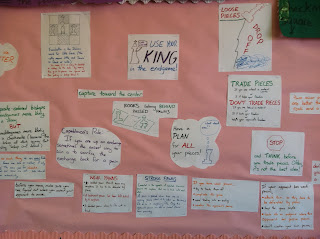 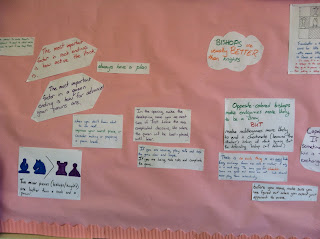 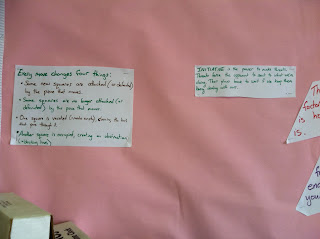 thanks for the help and please keep the suggestions coming.
Posted by Elizabeth Vicary at 6:41 PM 2 comments:

Sentence of the Week, Pathos and Petulance Edition

Here are our candidates:

B. I was no great fan of “Taxi Driver,” I found it a thesis statement shot from a spatter gun. (James Wolcott, “Lucking Out”)

C. Mr. Berlusconi pretended to fall asleep at one point, officials said, and afterward said he had never been held back a year at school. (Europe, keeping it classy)

D. Basically, unless you’re world champion, you feel like an idiot. (Chess master Greg Shahade, quoted in “Counterplay: an Anthropologist at the Chessboard”)

E. “Nothing soothes pain like the touch of a person.” (Bobby Fischer’s last words, quoted by Robert Desjarlais, “Counterplay”)