ok, ok, I'm sorry I said I wanted to crush your children....

hahaha.
really, I am.

anyways, here's my new line:
"I Love Working Harder and Practicing More Than the Other Children"
--pretty hard to object to that, right? 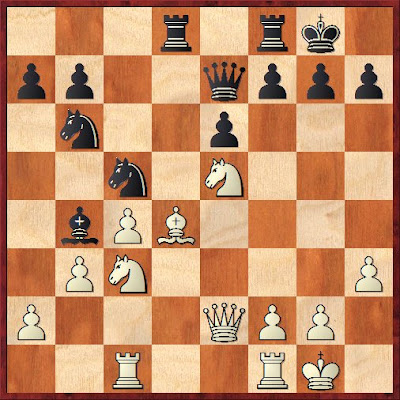 I'm white against Polyphonic, and he just played 16... Rad8 so I have to protect the bishop. 17. Rcd1 is out because it hangs the knight but 17. Rfd1 looks pretty reasonable. The thing was I hadn't decided whether including f4-f5 in my intended kingside attack would be a good idea or a terrible idea. Part of me wanted to leave the rook on f1. I decided to forget the d file and try to get things going with 17. Qg4. I threaten Nc6; it's not winning the queen because he will always have ....f5, but it would be good definitely. He plays 17.... f5; 18. Qf4 is kinda forced since I don't especially want to take on c5 and lose my nice bishop/ activate his. Now 18... g5 19. Qe3 f4 and ... 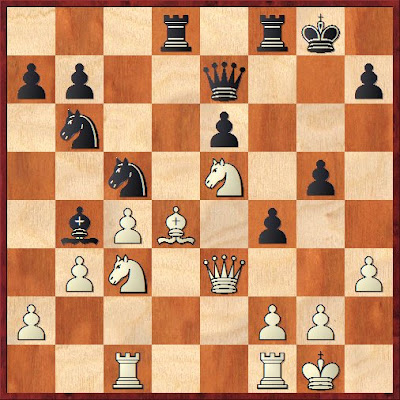 20. Ng4! (exclam for funniness, not goodness) Actually this is quite bad; I should just admit it was all a mistake: take on c5 and move my queen somewhere.

I got back from Philly last weekend, where I played in the Liberty Bell. I finished with 3/7, but 3/7 can mean a lot of things. Especially from me. I started out very peacefully... 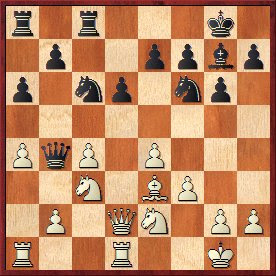 So, yeah, looks like I've f**ked it up again, right? But somehow this opening likes me and there's always some weird tactical way out of my positional indiscretions. 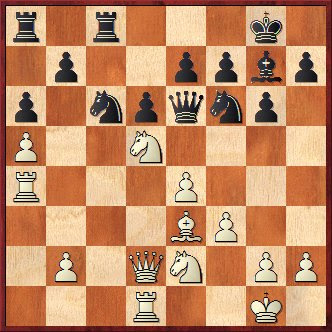 Now we are temporarily skipping round two, in which I drew IM Zlotnikov, because I accidentally left the scoresheet at work. 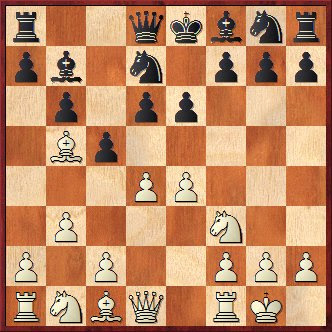 What can I say? It's a weird drawing line I had analyzed two years ago in preparation for the US Championship, when drawing a game against anyone seemed like a huge accomplishment. I didn't especially want another draw at this point, but there are ways to play most lines for more than that, plus I couldn't think of anything else to do.

7...a6 God I hated Victor Shen at this moment. Aren't teenagers supposed to feel invunerable?? Why will no one take my pawns, ever?

The mainline is of course 7...Bxe4. My file has tons of semi-random computer lines in it, but for you guys I'll just hit the high notes. Originally I got the idea from Rogozenko's book Anti-Sicilians: A Guide For Black. He specifically says 8. d4 is not playable, but, well, I guess that's because he doesn't see a forced draw as white as a huge triumph. 8.Re1 Ngf6

I remembered a game from this position that I played in Curacao the summer before last in which I put my knight on d2 and played a quick c4 and d5. Afterwards, Alex had told me this was stupid, but I couldn't remember if playing Nd2 was the problem or closing the position was. I knew my opponent had had all sorts of useful things to do after I closed things up, like organizing ...b5 and ....f5 and putting a knight on f4, while I was sitting there like an idiot, entirely planless.

But still, while playing this game I really just couldn't decide which square my knight should go to. First instinct said d2, but then I started thinking he would put the e pawn on e5 to blunt my b2 bishop and so then I would want to trade pawns and put my knight on d5?! I'm not even going to turn on Fritz to see, because I know that one move will be -.42 and the other will be -.22 and I get angry and convince myself the stupid computer has no idea. I will not do this, instead I will wait for my next lesson when Dave will explain all it all. It will all seem crystal clear and eminently logical while he is talking, at the end of the lesson I will be pleasurably sated by a sense of my own deep understanding. Later I will try to recreate the chain of thought in my own head, and it will seem alien, murky and hostile.

I considered 13.Qe2 first, but I thought I was pretty much worse here because my knight on c3 is ridiculous, and so I opted for Qd3, which seemed more aggressive. I was hoping to confuse him with a kingside attack. He looked like he might scare easily. 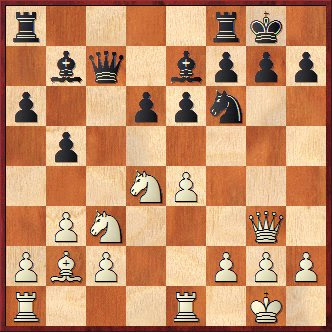 17...Nh5
18.Qg4 Nf6
19.Qg3 Nh5
20.Qg4 Nf6
21.Qg3 ½–½
OK, I'm a chicken to take the draw here, I am a little better and should play Qf4 or something. I just somehow didn't feel like playing anymore. Partly I was tired from a super long round two game (next post, I promise. I accidentally brought the scoresheet to work and left it there.) Partly I had been depressed about feeling like I was worse and frustrated that he kept declining my sacrifices. In future, I resolve to get more exercise and improve my physcial condition. And also to be less of a spoiled, whiny baby.

Posted by Elizabeth Vicary at 6:11 PM No comments:

I Love Crushing the Other Children 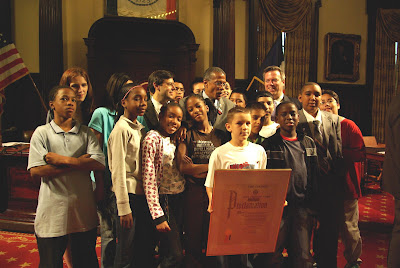 My students at IS 318 (a grade 6-8 school) won all three sections of the New York City Chess Championships last weekend: elementary, junior high, and high school. All three. hahahahahaha.
In your face, New York City schoolchildren who do not attend IS 318k.
Posted by Elizabeth Vicary at 5:19 PM 39 comments:

Does Chess Ever Make You Feel Like Shooting Yourself In the Head?

you are not alone.

GREENSBURG, Pa. -- A man tried to commit suicide at a Westmoreland County apartment but ended up blowing off his friend's elbow instead, police said.

During a game of chess at a Greensburg apartment on West Otterman Street, police said Zachary Lucov took out a gun and raised it to shoot himself. His friend, Dennis Kleyn, tried to stop him.

In the struggle, Kleyn had his elbow blown off. Police said the bullet continued through his arm and into the kitchen floor near where Lucov's 9-month-old baby was playing.

"The suspect pulled a Glock 40 up to his head and said he was going to shoot himself," said Capt. George Seranko of the Greensburg Police Department. "That victim grabbed for the gun. There was a scuffle, and the gun went off."

Kleyn was rushed to Excela Health Westmoreland Hospital, where doctors told him the damage done to his elbow would be permanent.

A woman who identified herself as Lucov's mother was at his arraignment, saying, "It was an accident. The guy's his best friend. He would never hurt him in a million years. It was a stupid accident."

But police said the accident could have been deadly.

"The officer said they were intoxicated, been drinking that night, and some things went wrong," said Seranko.

Lucov is charged with aggravated assault, discharge of a firearm in an occupied structure, reckless endangerment and public drunkenness.
http://www.thepittsburghchannel.com/news/15127675/detail.html
Posted by Elizabeth Vicary at 8:18 PM 3 comments:

Today's article has several experts agreeing that Mottershead's report, which asserted Truong's guilt, was correct (or, at the very least, sounded really great). Then at the very end, just to be completely, irreproachably objective, McClain quotes one final expert who agrees only 99% that PT is to blame. McClain explains that "while he (the expert--EV) agreed that the person identified as “chesspromotion” on the federation’s internal forum Web site was the author of the fake postings, “I am not able to identify the real person behind user account ‘chesspromotion’.”"

The New York Times Cracks Me Up

I don't usually enjoy reading about chess in newspapers for two reasons:
1. I've normally already read about whatever happened on a chess site and
2. It's written for a general audience, which means the chess bits are dumbed way down.

Consequently, I haven't been reading Dylan Loeb McClain's chess articles/ blog in the New York Times on a particularly regular basis. But today I realized that I should start, because he possesses a very special journalistic knack. You know what that is? In fact, let's make it a quiz. Your question is:

"What's similar and hilarious about how McClain writes the following articles?"

and just so you don't see the answer before you're ready, here are two big pictures and another couple question(s):

1. Name the two chessplayers in this photo. For a bonus point, where are they?


The way I see it, in each piece, McClain maintains a seemingly impartial tone, yet manages, usually at the very end of the article, to quote someone saying something that makes them look really really bad:

In the first, Paul Truong as shifty equivocator: "The charges are absolutely outrageous, and it is based on information that was obtained 100 percent illegally from the U.S.C.F.”

In the second, Eric Moskow as self-important ass: “When you are very wealthy you want the people associated with you dodging bullets, not creating them ... I can’t be wasting my time wondering if some child is posting something and another child is responding ... All I want to do is give my money away and play chess. .... The only good memories I have of giving money to chess in the U.S. are the scoresheets and the games.” (the scoresheets and the games? ev)

Just beautiful. Also, I should mention that the Times broke this story.

I'll post the photo answers in a couple days, but I imagine you'll also find them in the comments soon.
Posted by Elizabeth Vicary at 3:09 PM 6 comments:

Help Us Out Here

I, ok, actually my friends, need a few things. Can anyone help us out?

1. An teacher friend of mine is looking for a full time chess instructor gig anywhere in the country. He's 1800, has 9 years of experience, and is reliable, professional, and fabulous with kids. I recommend him very highly.

2. A grandmaster friend of mine wants to visit New York for a month or so and needs a room/apartment. He'll give you some lessons, and/ or feed your cats.

3. A female 2100 friend of mine is looking for a fun team for Amateur East.

Anyone?
Posted by Elizabeth Vicary at 6:51 PM 4 comments:

Are You Free This Friday?


Send me an email if you're coming and I'll reply with directions. evicarynospam@yahoo.com. (remove nospam)
Posted by Elizabeth Vicary at 8:44 PM 2 comments:

I am the Champion of Bloggers and (maybe also?!) the King of the FROGS?! (http://usclnews.blogspot.com/2008/01/blogger-of-year-award.html)

No, but seriously, folks, I would like to thank all my loyal readers out there, especially the ones who comment and vote in my poll(s)!

I have to say a big,

Without Ilya, I never could have defeated Bostonblitz.com so convincingly in the USCL Blogger of the Year Award! Thanks, Ilya! I owe you one!

And one last thing I wanted to say....

In your face, Boston

North American Open: Rounds Six and Seven: I Am a Proud, Lucky Champion and I Love Chess Again 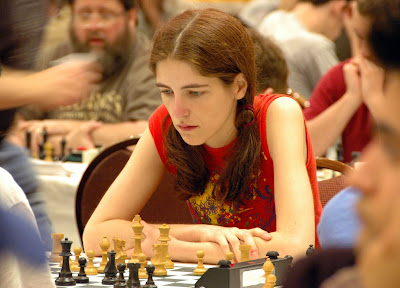 In round six I'm paired with the talented Christian Tanaka, who has the best board manners of any kid I've ever played. He's beating me in a Bogo Indian, the opening in which I am the luckiest, when we both hit time pressure. 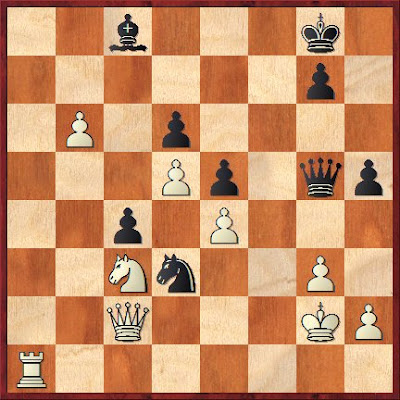 Finally, two interesting moments from my last round with Robert Akopian. 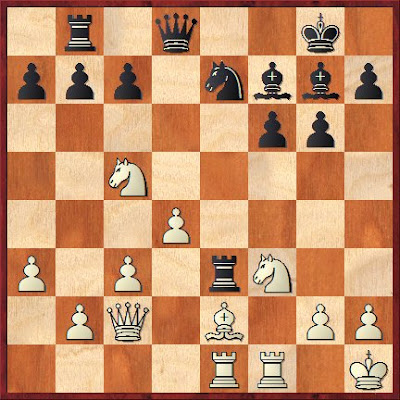 I play 20. Nd2; the game progresses; things go steadily downhill for me until we reach this position 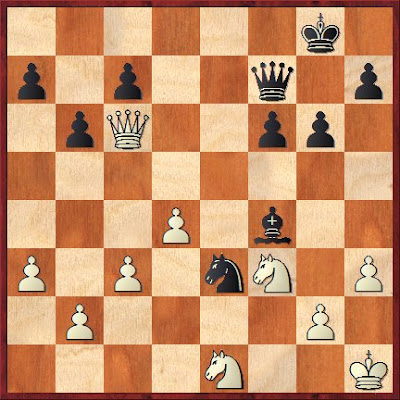 I finished with 2.5/7, which is moderately lame, but, ok, I knew I was going to be rusty, and somehow I gained six points anyway. Next tournament: Liberty Bell in Philadephia in 3 weeks, where I will endeavor to move quickly and achieve positions with fixed pawn structures.