I do this lesson as part of teaching how the pieces move. I normally teach the pawn first, then the rook, bishop, and queen, then the knight, then the king. (this is assuming 43 minute periods and 6th graders). After teaching the pawn, they play the pawn game. After teaching the rook bishop, and queen, they play a capturing game involving those three pieces plus the pawns, starting in their normal positions. I teach piece values simultaneously, and the objective of the game is to take more points than your opponent does.
If you were going to slow it down, I would teach just the queen in the second lesson, and have the kids play the excellent game Pawns vs Queen, (starting from normal positions, but with the d2 pawn advanced to d3). In this game, the black queen wins if she captures all the pawns; the white pawns win if one gets to the eighth rank, even if the pawn can immediately be captures upon doing so. This fantastic game teaches concepts like the double attack by the queen, advancing the pawns together to defend each other, and how much more dangerous the furthest advanced pawn is.
But when I teach the three pieces, rook bishop, queen, together, we practice their movement and captures by talking about which captures are best. This is really a bread and butter skill of chess, as capturing your opponent's pieces in the best possible way is 75% of playing well, and like all important skills, it needs to be taught explicitly.
Consider the following position, removing the kings (chessbase won't let me save a position without them, but of course the kids have not learned the king yet). 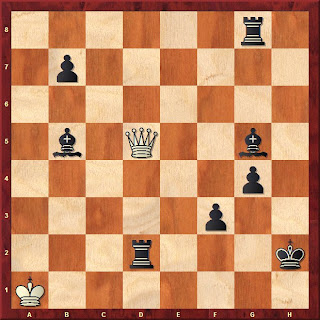 The white queen can capture most of the pieces. I ask which black piece can the queen not capture.
I explain that the best capture is the one where you get the most points, and don't get recaptured. I then ask the kids to explain which pieces are protected, and how. I ask which pieces are not protected, and ask them to figure out which capture gets you the most points.
Often my second lesson takes a little longer than I would like, because I have a lot to do in it (reviewing the pawn, teaching three pieces, piece value, how to set the 4 pieces up, modeling 5 moves practice of the game they are going to play on the demo board, letting the kids play, and then showing them how to figure out who won at the end). If you feel rushed, this lesson also works very well as the review of R, B, Q, P movement at the beginning of lesson 3.
I do the same kind of thing after teaching the knight, for example: 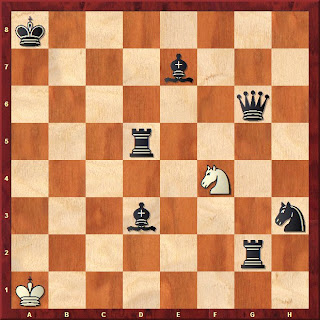 Again, I ask which piece cannot be captured. Then I ask the students to talk through which pieces are defended and how, as well as how much each is worth. This gives us a chance to talk about how it's worth taking the defended queen over the free rook.
Finally an example from "real chess" 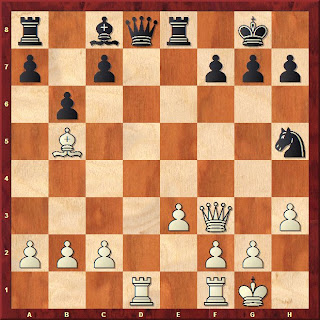 And here you can compare Rxd8 with Qxa8, and depending on your class and time situation, maybe someone will point out that while Qxa8 looks better in isolation, you could have the best of both worlds by taking on d8 first and then taking on a8.

Posted by Elizabeth Vicary at 6:28 PM

I don't know how you'd like to be called, but I recall you as one of the few people I've always held close to my heart. This evening I watched the DVD of "Brooklyn Castle" and was astonished at what you had accomplished. I visit NYC about once a year. The next time I come to visit, I'd like to see you. --Paul Betz

Dear Elizabeth,
I love this, please try to keep on blogging these lessons. I always need new ideas, especially for summer camps, and this stuff is great! Plus, I have absolutely no problems with stealing ideas, as long as I give credit. :)
All the best to you, Jonathan, and the little kicking machine in your tummy.
-Marc-

Elizabeth, Paul Betz said it for me too. I've just watched "Brooklyn Castle" too, and fell in love with you and what you do.

Congratulations on your marriage and son.

Approaching 70 (and definitely senile), I'm trying to finally learn chess beyond how the pieces move. Your seven favorite lessons will be part of that education. Thanks for sharing them.

And thanks for the great work you do at the schools. It appears the children learn about more than chess.