I start by explaining there are really two ways to win a game of chess: you can
1) attack your opponent's king and checkmate him, or you can
2) a. win material (be up pieces),
b. trade all the pieces off,
c. get a pawn to the other side of the board,
d. get your queen back,
e. do the king and queen checkmate*

I explain that we are going to look at some positions today and practice winning the second way. I then write on the board
Reasons to Trade
1. You are ahead material
2.
and then I ask students if they can think of another reason you might want to trade pieces. I'm looking for answers like "You are being attacked" or "Your opponent's piece is better than yours" and obviously I then write that one the board.

We then look at the following positions. All of them are taken from Coakley's books: some from the green book and some from the blue book. 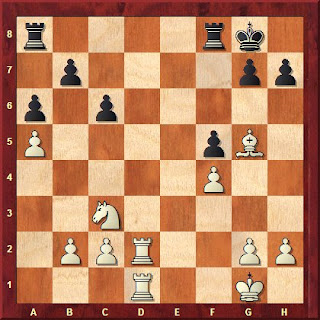 1. I start by asking what the material is. I then ask a student to find how white can trade off black's remaining big pieces (1. Rd8 essentially forces the exchange of both pairs of rooks). Finally, I ask how white will win after that. I'm look for an answer that involves Na4-c5xb7/a6, centralizing the king, and advancing the queenside pawns. 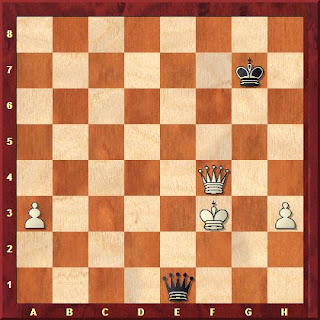 2. Again, I ask what the material is, then how white can trade queens. (1. Qg3+) Next, we talk about how the black king can't stop the advance of both pawns. Finally, I go back and ask what black is going to try to do if white doesn't trade queens. (Hopefully, you've done the lesson on 5 kinds of draws and perpetual check, so kids will recognize how annoying the black queen can be.) 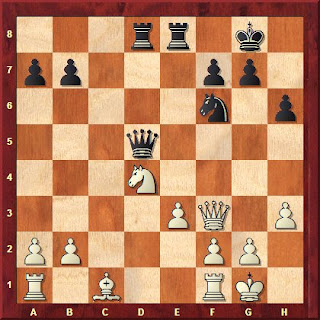 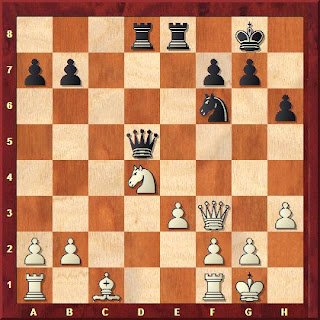 4. We then look at the same position (#3) but with black to move. I say ok, if white's up material and that means she wants to trade pieces, what do you think black wants to do (not trade pieces). I ask students to suggest a move that does this: the best two are 1...Ne4 or 1...Qd7, as other moves hang b7. 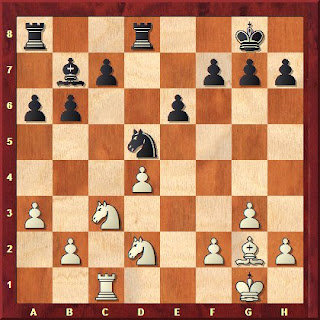 5. I always start with asking what the material is. It's very important to get students in the habit of counting the material whenever they first see a position, and it's a great, easy-but-important question to ask struggling students.
I then ask who wants to trade pieces (black). It's good, incidentally, to vary how you ask this second question slightly: I usually start in the first two positions by saying white wants to trade, then I ask what being up material means you want to do, then I establish who is up material and ask which player wants to trade. Students will understand and be able to apply the idea better if they've thought about it from a couple different perspectives.
I ask how black can trade pieces (1...Nxc3) and say let's assume white recaptures (2. bxc3). I ask what else black might do (2. Bxb7) and say we will come back and look at that in a minute.
After 1...Nxc3 2. bxc3, how can black continue to trade? (2...Bxg2 3. Kxg2)
I ask how black can try to continue to trade? (3...c5) We talk about why white can't capture on c5 (...Rxd2) and how d4 is now attacked twice and defended once.
I get someone to suggest 4. Nb3 or 4. Nf3, make the moves 4...cxd5 5. cxd5, and ask how black can offer another trade? (...Rac8):

We finish by talking about what black might do after the trade of rooks (invade with the last rook to c3, win a3, centralize the king, advance the queenside pawns). 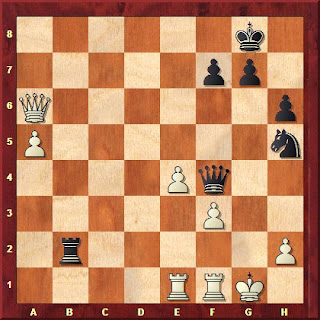 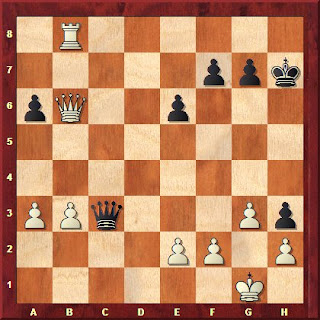 7. At this point, I might ask a more general question, like "What's going on here?" I'm hoping for the answer "White is up a rook, but black is threatening mate with Qe1/c1/a1."
Ask how white can stop the mate. Notice that moves like 1. Qe3 or f3 that stop some mates don't stop 1...Qe1#.
White's only way to stop immediate checkmate is to sacrifice the rook: 1. Rh8+ Kxh8 2. Qd8 Kh7 and then 3. Qd3+ forcing the trade of queens is a much easier win than 3. Qh4+ followed by taking black's h3 pawn but allowing 4...Qxb3. After trading queens, white wins by centralizing the king and advancing the queenside pawns. 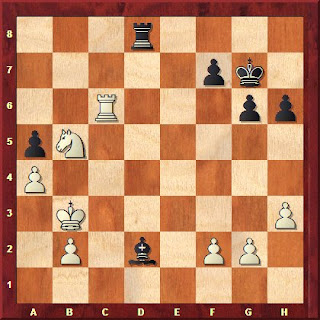 * obviously, you should have done the king and queen checkmate lesson before this one.
Posted by Elizabeth Vicary at 2:54 PM

It's great you're sharing these. Fun to read about.

White has Rxh3 anonymous, although you probably realized this by now :)