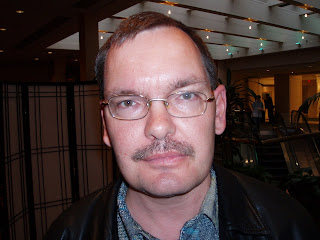 Below is an interview I did with Jaan for my Chess Life article on the Chicago Open last May. It got cut from the issue, ostensibly because I went way over my allocated word count. Or possibly for other reasons. But I think it's funny enough to deserve to see daylight, so here you are:
Interview with Jaan Ehlvest
EV: Tell me about the opening choice against Shulman. You always play this?

Jaan: What line do you want me to play? Chess is not so well-paid; I don't want to spend all day analyzing these lines. I don’t play like Wojt.; he knew even less than me. Ok, I am a little bit lazy with openings. I don't like to follow very modern lines because everyone is doing this. Actually I borrowed this line from Kamsky, from our game in 93 in Gronigen, which I lost. I also played it against Kasparov in 95 in a super-tournament in Horgen. But the Smyslov system, it’s good enough, and besides, no one plays the King’s Indian anymore. OK, Becerra, but against me he plays the Slav… OK, and Dmitry Gurevich, it’s true, so Dmitry knows how to make a draw in the King’s Indian with white, ok, so what?
Shulman is a very unpleasant opponent for me, because he knows his openings very well. Sometimes they are second-rate and he gets a worse position but he knows them very well. He likes to play forced lines, where he makes twenty moves in five minutes. He plays the King's Indian sometimes too, but the King's Indian is not so good right now. He plays the Vienna variation: 1. d4 d5 2. c4 e6 3. Nc3 Nf6 3. Nf3 dxc4 4. e4 Bb4 5. Bg5 c5. It's a typical line for Shulman, very sharp, all forced, not positional at all! Why didn't I play 1. e4? (pauses, thinks to himself) Hmm... oh yeah he plays the French, yeah.
Recently, I've had a lot of critics saying I should concentrate more during the game. But I'm usually very nervous, that's why I walk around. Chess is a horrible game. I mean, the game is very nice, but for a profession it's something else. It's not easy to concentrate, you know? If you try to over-concentrate, you can break down. It must be a balance. In American chess, concentration is not so important. Nearly all American players are patzers.

Jaan: The exceptions... Shabalov, Onischuk, Kamsky, Nakamura. But at some levels it is important to concentrate. Like in my game against Alekseev, in Moscow. I lost because he was concentrating better than me. But in the US Championship, I tried very hard. In my game against Nakamura, I over-concentrated. Sometimes you need to play more easy. Sometimes I play too hard. You get criticized when you do this, but you need to find the correct balance.
To find a good second is very hard. I can’t give advice to Shabalov, because he’s already a grown-up player. I should tell him to quit the Sveshnikov as fast as he can. It’s a horrible opening, positionally incorrect. If you are a weak chessplayer, like you, then it’s ok to play because there are forced lines and sometimes surrealistic positions. But if you are a very strong player like Shabalov, and you are playing Stripunsky why give him such an advantage? (Jaan refers to Stripunsky-Shabalov Foxwoods 2007--EV)

EV: So what happened in your game against Aveshkulov? You lost on time? I heard the position was repeated several times?

Jaan: My position was lost. We repeated three times, but I wasn’t writing the moves down. We didn’t even discuss the repetition. My head wasn’t functioning very well; I was tired from playing five games the day before.
You know what I hate the most in these tournaments? Delay! Delay is like a handicap for me. Delaying what?

EV- But even in Europe they have increment. Is it really so different?

Jaan—Of course! It’s vicey-versey! In delay, you have five seconds, if you have a crappy position, it’s enough time to find the only move. But it’s not enough time to come up with a plan. It gives more chances to the weaker player.

EV—I don’t really get the difference.

Jaan- Why don’t you understand? OK, here (shows me a position from a game he played that day in a G/30 against Sal Bercys: W Ke5 Be2 Be3 Pd5, c4, a3 B: Kd7 Bh3 Na4 Pc5, a6.) I have a minute; he has a few seconds. With increment white is winning, I can just repeat a few times, and build up 3 minutes, then find a plan. But delay is no help; I never will have more than five seconds. It’s black to move here. He can play 1… Nc3 2. Bd3 and go back with 2…Na4, because I can’t win the pawn with 3. Bc2 Nb2 4. Bb3 Bf1. In the game, he blundered with 1…Ke7. After this, when I take on c5 it’s check. If he hadn’t done this, I don’t know. The position must be winning, but with this time control I’m not so sure I can win it.
Increment is not allowed in America. It’s all Ivanov’s fault! Because he doesn’t like to lose on time! In my game with Aveskulov, there should have been an arbiter there to write down the moves, but they don’t want to do it. There are so many arbiters in American chess, but what are they doing? Never watching the games! (thinks) Actually with Aveshkulov we didn’t have delay. Or maybe we had. I didn’t notice.

EV-- What are your biggest problems in chess?

Jaan-- In general, I think my chess is ok, I only need to make some physical preparations: lose five pounds, play some tennis. OK, my main problem is time trouble. It’s a consequence of not knowing the opening so well. Also I’m afraid to make decisions. I should work on it, but look at Korchnoi, he’s a great player and was always in horrible time trouble.
But I will go to Pittsburgh, work it out with Shabalov, he will prepare me for the Continental. And I need to teach him some decent openings. Do you know why I’m so angry with the Sveshnikov? Because I can’t beat it. So he and I need to find some decent line against the Sveshnikov for white so I can beat people and he can quit it.

EV: You recently changed federations. Why’d you move to the US?

Jaan: If you want to play chess, you can only do it in the US.

EV: I thought the chess in Europe was very good?

Jaan: In Europe? What are you talking about? In Europe, if you want to make a living you have to beg these guys to play in the Bundesliga, the French league, the Dutch league etc.. But then you are not free, and I like to be free.
But what really happened was I met up with the late Wojo in late 2002 in Mexico, and he was bored, so in March 2003 I was like “Ok, I move to Baltimore.” But I was too slow to move, to take the necessary tests. And then this thing happened with Sherzer, and they made new rules for older guys like me. I was quite interested in doing an advanced degree in psychology, but I found out it was applied psychology, plus I would have to be there every day….However, there’s not much to do in Estonia…

EV-- So where are you based now?

Jaan—I’m a homeless chess player (laughs). I have some meetings in July, probably I’ll go to work in some other area, not chess. I want to play like Kamsky does: only in really good tournaments: the US Championship, the World Open, something else maybe, and at other times just work.

Posted by Elizabeth Vicary at 12:43 PM

This was the kind of interview you might see on "Sixty Minutes" if they had a five-second time delay. I hear you on the "other reasons"; they've held back my career, too.

I don't know specifically what it was about this interview, but Jaan made me laugh a few times!

Thanks for sharing this!

However mean your gold in wow life is,buy wow gold meet it and live it ;wow gold cheap do not shun it and call it hard names.It is not so bad as you are.It looks poorest when you are richest.The fault-finder will find faults in paradise.wow gold kaufen love your life,poor as it is.maple meso You may perhaps have some pleasant,thrilling,maplestory power leveling glorious hourss,even in a poor-house.The setting sun is reflected from the windows of the alms-house as brightly as from the rich man's abode;the snow melts before its door as early in the spring.sell wow gold I do not see but a quiet mind may live as contentedly there,cheap mesos and have as cheering thoughts,as in a palace.The town's poor seem to me often to live the most independent lives of any.May be they are simply great enough to billig wow gold receive without misgiving.Most think that they are above being supported by the town;powerlevel but it often happens that buy maplestory mesos they are not above supporting themselves by dishonest means.which should be more disreputable.Cultivate poverty like a garden herb,like sage.Do not trouble wow powerleveln yourself much to get new things,maple mesos whether clothes or friends