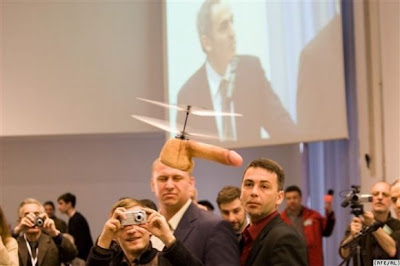 I could not make this up.
http://www.belfasttelegraph.co.uk/news/world-news/article3720115.ece
Posted by Elizabeth Vicary at 10:48 AM

Believe it or not, this incident apparently was created with a serious purpose in mind - to (further) discredit Kasparov's efforts to challenge the Putin regime.

So, a Putin enemy who possessed truly damaging information and prepared to release it, was treated with "radioactive poison," as Mig put it.

On the other hand Kasparov, who isn't as immediately dangerous to Putin but whose credibility and potential influence over events rests heavily on the tone of his media coverage - including non-traditional venues like youtube and blogs like this - can be effectively discredited by making him appear unintentionally comical, a schlemazzel. So according to Mig, the flying penis was a quite deliberate, planned (and brilliant) tactical maneuver carried out by the Putin team. (no joke)

Mig also said that provocations of a similar nature are launched at Garry all the time in Russia, to the point where his team (and his audience too, I presume) just takes it for granted they will happen.

Think of it as akin to an election campaign rally in the US, where hecklers "spontaneously" show up to poke fun at (or otherwise disrupt) a candidate's appearance - and divert the news coverage that otherwise might have focused on the candidate's speech. Are the hecklers really just fellow citizens who were fed up with the candidate?

Well, it turned out they often wwere anything but spontaneous independent citizens - at least, back in the day when the "heckled" candidate's opponent was one Richard M. Nixon.

According to one report, a member of the audience shouted out, "Now we see the true face of the opposition!" to which Kasparov retorted, "Well, if that's its face . . . "

In that light, I've gotta call the incident a win for Kasparov. Free publicity, and he didn't lose his cool.

No, no - the object in the photo is much too small to be a penis!

Well, they may be hip, but if their aim here was to discredit Garry, I find it hard to see how they accomplished that. I'm with anjiaoshi here. Advantage: Kasparov.

Is this a new UAV? I can just imagine a whole squadron of them flying around afganistan....

Do you own one of those?

I hereby move to have the offending object dubbed the Zugschlang.

Do I own a flying one? Not yet.

I have to say this only increases my repsect for Putin.

anjiaoshi: I second that. LOL, as you kids say.

and more importantly, can we watch?

Did you see the size of the pecker on that mosquito!