You know who is my big hero?

You know who we should all forget about Kamsky and Nakamura and Bhat and Krush and focus our sponsorship dollars on? (No offense to the above people, who are all excellent and otherwise deserving chessplayers.)
Ray Robson. 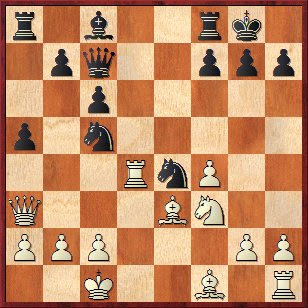 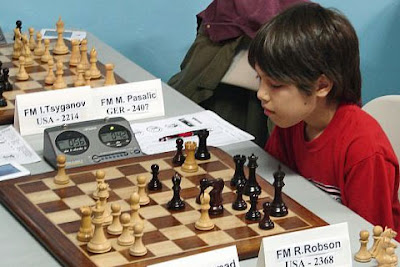 He plays so incredibly well. Eugene Perelstheyn did a beautiful video of Robson beating him on chesslecture.com, in case you want to see a Robson game.

He's also a very nice kid. I was fortunate to draw him a year ago in the New England Masters-- I can play a few good moves in a row sometimes, but I am nowhere near this kid's level. Shabalov joined us for the post-mortem and it was pretty much just Ray and him analysing, with me occasionally interrupting to ask a question or to see a line again. At no point did Ray act annoyed to draw me or incredulous at how slow I am at analysis.

Someone should step up and sponsor that kid, even just as a patriotic, here's-an-American-who-can-win-the-world-championship gesture.

Posted by Elizabeth Vicary at 3:55 PM

Isn't he a recipient of one of the Friedman/Schein fellowships? Not exactly a corporate sponsorship but a step in the right direction.

I too was surprised Robson hasn't gotten more press/hoopla/support, especially from the USCF and its media organs (such as they are).

You could mention that he made 3 IM norms in the space of something like 6 weeks last November and December. That means he's now an IM-elect, since his FIDE rating is above 2400.

Achieving norms in such quick succession is really awesome. Most players must literally work years to do that, no?

Well, maybe not in the case of youth players, who get to travel abroad for free and play for free in many overseas events that are limited to other youth, some of wom are over-rated; and some of the youth events provide not mere norm qualifications but automatic titles for winning a single tournament. (The African Under-16 Champpionship, which awarded an automatic IM title to a 2100 who finished first against 1600-1900-level opposition, is the most infamous example.)

While one Robson's norms did come in a World Youth event, his other two were earned in the good old USA. In the third event, he had already clinched an IM norm by the halfway mark! (He went 4/4 against 2 GMs and 2 IMs in the first four rounds. He even seemed to have a lock on a GM NORM - he was tied for first after 7 rounds - but then managed just 0.5 point from his final four rounds.)

All of that said, the position shown here is trivially easy. Anyone above 1800 should spot the winning move instantly, and not only when someone tells you (as here) that it's "White to move and win," but even in a tournament game when there's no external sign that there's a forced win to be had....unless of course one is so intimidated playing against a GM that one's brain blocks out the very thought that there could be an easy win in the position.

Very impressive play. After he played 16. b4!, Robson had more than half an hour left on his clock. Curiously, the game continued:

Ray got a lot of attention here in Chicago last fall when he earned his first IM norm. Seems like an eternity ago now.

His Chicago triumph, I should point out, was also very good for Chicago chess; it got us a lot of attention, too.

I agree the tactic is not terribly deep, but that's part of what I meant by "crush like a little child". When have you ever outplayed a GM to such an extent that you had an easy win on move 16?

Liz wrote:
"When have you ever outplayed a GM to such an extent that you had an easy win on move 16?"

I'm the same guy that posted the second comment. Now that you ask, I can think of two instances against GMs - the first of which took place about 6 weeks ago - and one against an IM. Partial game scores appear below.

The moral: As I recall reading when I was a kid, "Even grandmasters put their pants on one leg at a time." (But Liz is more qualified than me to confirm that particular observation.)

(Somehow I still managed to lose this game.)

ray is a genius but he totally sucks as a bughouse partner.