my weekend: a date, a saturday tournament, the bus to saratoga springs

I feel like that's a pretty big accomplishment already, plus, I thought it went well. But I'm telling you this to give you context for the thought I had, not (or not only) because I'm bragging that I had a date.

So, at some point, he put his arm around me, and I thought wow, I have absolutely no physical contact with human beings anymore.

ultimately, though, I am proud of myself because I did not say this to my date, despite the fact that I thought about it for a long time. but i realized in time that it is not the sort of thing you say on a date.

Saturday I took the non-state championship kids to the chess in the schools tournament. They played well, and overall, I am very happy with the kids' progress this year. I feel like I can see progress week to week, and that's very exciting. I have one kid who has gone from 700 to 1300 in one month.

then I got on a bus to saratoga (lv nyc 9 pm, arr saratoga springs 1:45 am) where the top kids were already with Mr Galvin. for some reason, I really enjoyed riding the bus. I had a nap and felt very calm.

I am reading an interesting book called Panic: The Story of Modern Financial Instability. it is really a collection of magazine pieces about five recent economic crises (the crash of 1987, the Russian default, the Asian currency crisis, the internet bubble, and the subprime lending collapse). while I am on the subject of my current tastes in entertainment, I am listening to an album, seven swans, by a really pretty, folky singer, sufjan stevens.

On Sunday I woke up early and looked at a lot of games. I felt like I was doing a good job, giving a good performance, having some important discussions.

Here are two/three quiz positions, with answers at the end of the post: 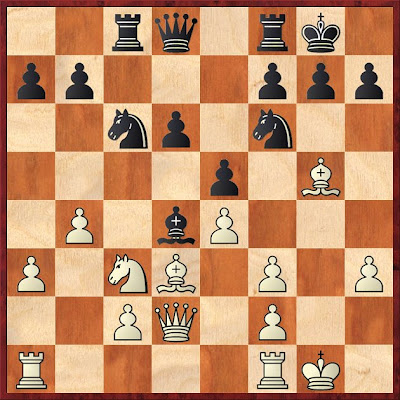 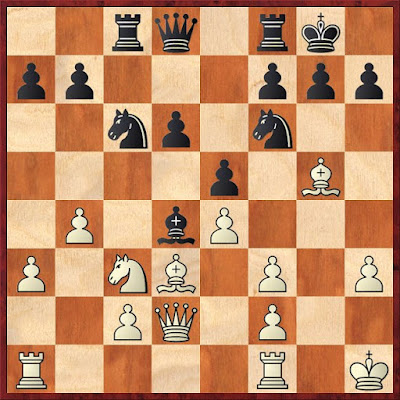 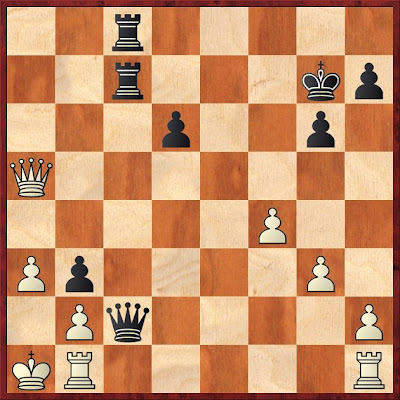 After we stopped looking at chess, Galvin and I hung out with some of the kids in one of their rooms and it was very touching for me -- the children were all laughing happily, talking to us very eagerly, one of them was looking at me all doe-eyed, and I felt suddenly like how nice, this must be what it's like to have a family.

I met an interesting parent who does photography. He builds these little houses and then transports them to strange places and takes pictures. 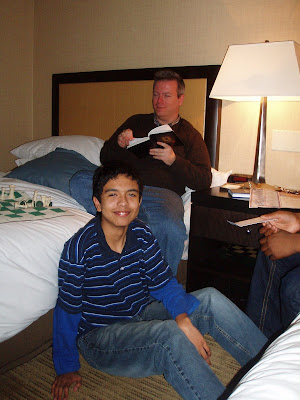 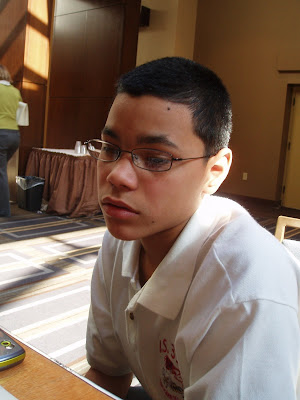 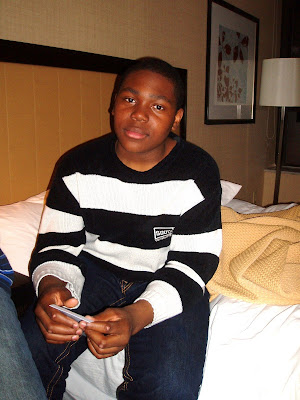 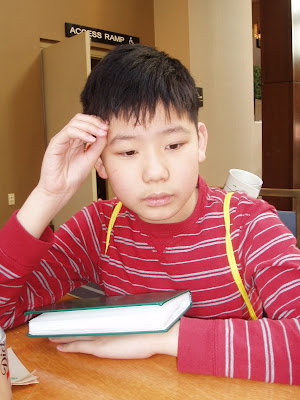 Danny Feng: 600 points in 1 month
Solutions!
Question One
Dabrowski, Sebastian - Poteat, Lilia
State Championship, 01.03.2009
I'm not sure which position it was: what I wrote down was the first, but this one allows a defence that I really think I would have seen, especially as three or four kids were analyzing with us and we were moving the pieces. Definitely I should have seen it. but it doesn't work in the second diagram, we'll get to that in a moment, and so I'm hoping perhaps that is the correct one and I incorrectly wrote down the position?!
anyway, 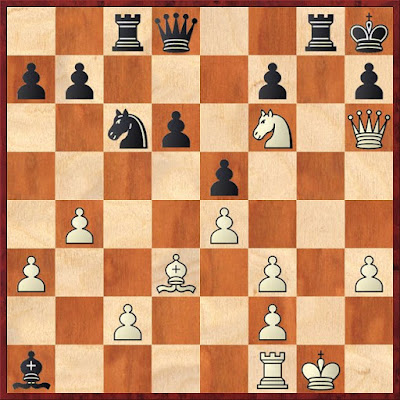 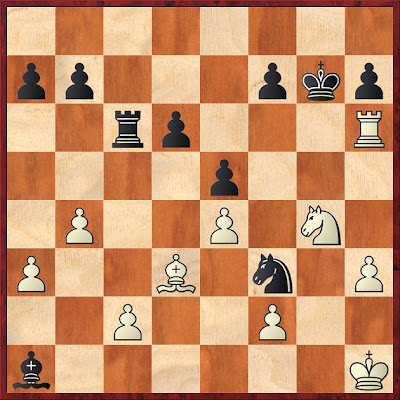 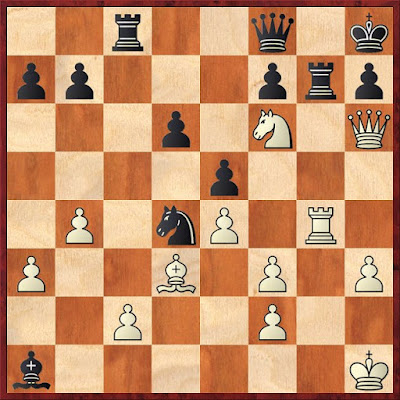 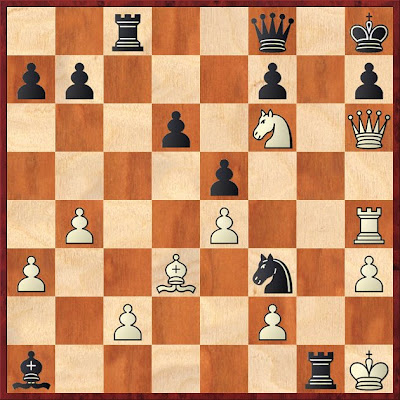 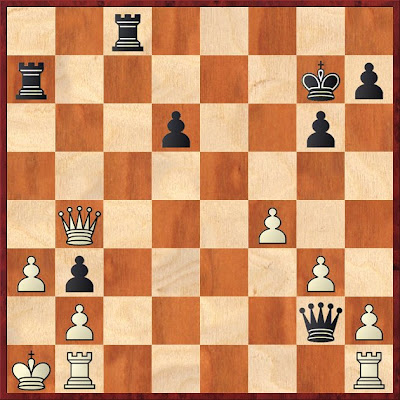 Nice puzzles Lizzy, I'm still looking at both of them for improvements; positions like that from actual games are fun.
I'm glad your date went well. It's widely known:
http://www.imagitek.com/xmas/ideas/hugs.html
http://www.sfpnn.com/josephw/vs012199.htm
that people need 4 hugs per day just to survive, 8 to maintain emotional stability, & 12 to grow, but the good news is:
http://www.k12tlc.net/samplett.htm
Teachers get more hugs per day than any other profession!
How you get someone to go from 1300 to 1700 in a month is a little more complicated.
I suspect you're doing something right.

"Bogarty" is Michael Bogaty (although it's true that Humphrey Bogart loved chess).

"So, at some point, he put his arm around me, and I thought wow, I have absolutely no physical contact with human beings anymore.

ultimately, though, I am proud of myself because I did not say this to my date, despite the fact that I thought about it for a long time. but i realized in time that it is not the sort of thing you say on a date."

If your date knows about your blog, or even if he doesn't but is inclined to Google you, then the proverbial cat is out of the bag ... maybe too much information too soon.

Here are ten other things a guy would rather not hear on a date:

(2) The profile said you were taller.

(6) Could you lend me about twenty grand?

Better a fake name than the cold shoulder.

It seems to me that blokes are falling over each other trying to get a date with you.

Are you very picky?

but everyone trying to get a date with me is anonymous.

"Are you very picky?"

I think the problem is that although she is funny and charming and while no beauty is nice enough to look at the moment you express disagreement with her she turns into Liz-zilla.

Proust, the Rybka of love, reminds us that, "The heart, with its doubled isolated pawns, has compensatory piece play and some pressure along the b-file" (In Search of Lost Pawns).

Surely that is enough.

I believe it was Blaise Pascal who said, "The patzer has his reasons, of which reason knows nothing."

In question one, it doesn't really matter where the white king is. After 1.Nd5 Bxa1 you can just recapture - the pin on f6 is forever and White can build up with Kh1 and Rg1 or just play Bh4 and Nxf6. It's got to be great for white.

I was going to comment on question #1 also, but I'm not sure which position is really the critical one.
My instincts coincide with the anon who said "...the f6 pin is forever", even though it's not.
The whole "Liz-zilla" thing is somewhat subjective. I prefer to think of her as just being honest, brutally so at times. It's not true that the only people interested in dating Liz are anonymous; some of them are just from out of state.

Google Chrome tells me, "This page contains some insecure elements."

The pin is barely even temporary, because I'm sacking the Q with ...Nd5 and ...Nf4. But the K is certainly better on h1.

Who would've won a Proust-Pascal match? Talk about clash of styles.

Perec-Queneau would also have been interesting.

It's much easier to imagine French writers as chess players (however, see http://tinyurl.com/dxmdnr ).

This study was composed by Alfred de Musset (took me a while to remember his name), who was one of George Sand's lovers (but who wasn't?)

And anyone who's interested in Beckett and the theory of coordinate squares HAS to read this amazing article that'll give you a new appreciation of Hamm and Clov.

Who you calling anonymous?

Not sure if this was already mentioned, but with the King on h1, Nd5 can be met by Qd7, threatening at least a perpetual with Qxh3-g3-h3, etc.