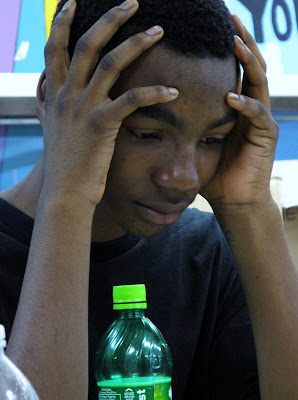 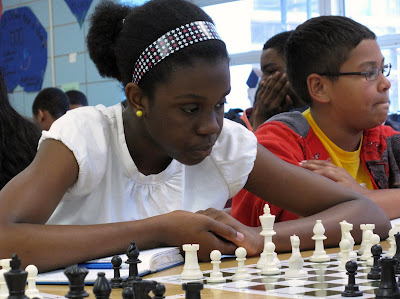 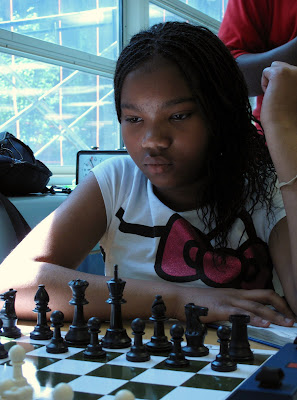 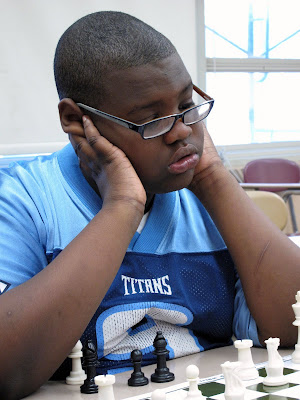 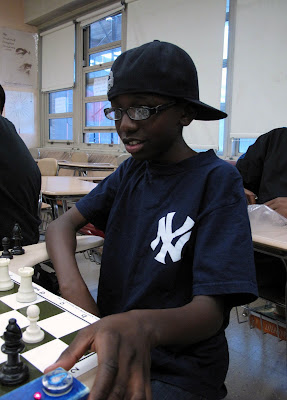 Life is treating me well. Elementary nationals are coming up and we are only taking 10 kids, which should be cake. I think we are probably the favorites in K-6, as we have three experts and a couple 14-1500s. VAMOOD looks like the main competition with an 1800, 2 1700s and a 1600. I should mention that we lost to a team with similar ratings in the K-9, so I perhaps shouldn't feel so confident.

the K-5 section is going to be much more interesting: there're a number of crazy strong teams.

Stevenson from Washington (WASTEV) -- where Michael and Megan Lee went to school-- has 2 1700s, a 1630, 1541, 1414, 1382. I think they have to be the favorites, even though the Illinois team might look better on paper, because of their track record at nationals. A few years ago they cleaned up in the under 900 section because their kids weren't USCF rated. (They have some Washington rating system) That same year they came top 10 in the k-5 open section with nobody over 1050, and then they won it last year with some 13 and 1400s. Good job, whoever coaches there; I'm totally impressed.

There's also an interesting team from Illinois, ILL004, with two 1800s, a 1676, 1426, and 1378. I suspect they might be from this one school district that petitioned the USCF a couple years ago. Their rural district is divided really strangely into one K-2 school, one 3-4 school, one 5-6 school, etc: just one school for the whole district, but with maybe 12 classes in each grade. I'm making up the number twelve, but you can see the potential pedagogical advantages of this set-up. Then all the kids go on to the next horizontally enormous district school two years later. The kids are seriously disadvantaged at nationals because they can't play their whole elementary team together. Of course, they probably would have had two elementary schools in their district if they did that, but you can see how unfair it must seem to the kids. (If it's the same school, very possibly it isn't.)

The rule as it is now says:

I wasn't in favor of changing the rules, just because it's such a slippery slope down. Pretty soon feeder schools would be wanting to play with their junior high school, and imagine the complaining parents all around. It seemed crazy to open that can of worms. but maybe they will win this year anyway, although they are all in third and fourth grade, and I think being younger is a real disadvantage in a tournament as grueling as nationals.

In other news, I'm planning The Greatest Summer Ever. It starts with the World Open, where I will win before even playing by staying with Greg for free. Then I will go to the US Chess School in Dallas (July 7-11) with James and Justus. and on July 21, Jonathan and I leave on our European Apartment Swap Special. We'll go to stay with my father in London for a week, then we are doing an apartment swap with two Spanish friends of Jonathan for two weeks each. We'll stay in Barcelona for 2 weeks and Tarragona, a small city on the beach about 45 minutes outside Barcelona, for another two weeks. Jonathan will paint and I will study chess and we'll go for long walks and make nice meals and it will be wonderful.

Everything with Jonathan is going great. We remind me a bit of Erin and Andy from the Office. It is nice when someone makes you every meal and is always interested in you and your thoughts.
Posted by Elizabeth Vicary at 7:41 PM

I am so jealous that you, Liz Vicary of all people, is getting swept away to Europe by a cute guy.

Ralph Fiennes, I am available and sat through The English Patient. You owe me.

I hope, too, that y'all enjoy your time here in Dallas.

Don't take the comments too harshly. It is like the scene from "As Good As It Gets" with Nicholson, Hunt and Kinnear. Nicholson explains how there is a beautiful world where people dine on a veranda on wonderful food, sip great wine and enjoy a spectacular view. He then points out that you (his audience) aren't those people and never will be.
Your description of this wonderful chess/European vacation is like that. There is a beautiful world where people know how to play and play well and they travel abroad and see beautiful places and enjoy great experiences - but it is not you.

I'm glad that you are happy and your life is going well. You are doing something worthwhile - you show the kids that being good at something like chess is meaningful.

@Anonymous 10:37 - I don't understand how the referenced movie scene explains why the first comment shouldn't be taken harshly. In fact, it's not clear to me that she shouldn't be offended by your post, either.

@Liz - while in Spain you gotta try the grilled octopus!

What anonymous meant to say was "Liz, of all people, while in Spain, of all places, you must try the grilled octopus, of all things".

I think anon from 10:37 is pointing out is that there are realities of life which are tough for some people to accept. Some people do enjoy beautiful lives. Don't begrudge other people's happiness - try to create more of it.

Yes, Greeks, Spaniards and Portuguese know how to live the wonderful life. Unfortunately while they were sipping great wine on the veranda and taking in the view their economies hit the crapper. Now they will expect (or in the case of the Greeks already do expect) those like the Germans, who have actually been working for all these years, to bail them out.

I'd like to go on record as having predicted back in 1998 that European monetary union was a bad idea.

I don't really get what you guys are saying. I fully intend to go to Europe and swim in the ocean and drink wine while watching the sun set. Why do you think I don't know how to enjoy great experiences??

WE ARE going to Europe. We ARE going to swim in the ocean, ENJOY great wines, SOAK up everything our host countries have to offer all the while enjoying each other to a boundless and immeasurable extent! I do personally know Elizabeth knows how to enjoy great experiences! To all you doubters, in the words of my students, "Y'all TIGHT!" Love - The Boyfriend

Silly bunch.
Best to keep one's personal life to oneself. Unless there is a great amount of insecurity.

I have jock itch, and the antifungal cream doesn't seem to be helping.

"I have jock itch and the anti-fungal cream doesn't seem to be helping."

Wow that sounds like a blast! Two weeks in each spot to just live, explore and enjoy. What fun!

I've read this thread several times, and I'm still not sure what's going on. But I don't think that anyone was expressing doubt about whether Elizabeth is capable of enjoying great experiences. Rather, there was perhaps a whiff of resentment in one of the comments, and other commenters were trying to drop a containment dome around it.

P.S. I want to go on record as having predicted in 1913 that the Federal Reserve Bank was a terrible idea.