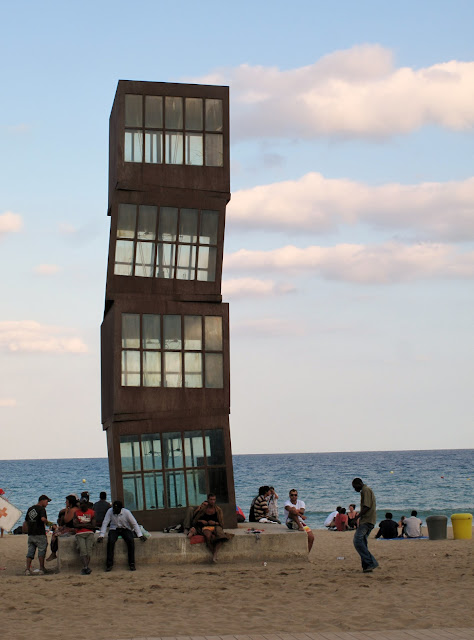 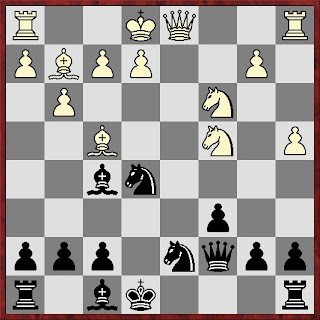 I know this opening from teaching it to my students; I've played the Slav in 4-5 games so far, but never this line.
However, I'd looked at it with a class a few weeks ago, really superficially, but I remembered black has two choices here, 11...f6 is the old move, and solid, and a few years ago Morozevich shocked everyone with his novelty 11...g5. The class had come to the conclusion that the position after 12. Nxe5 gxf4 13. Nxd7 Bxd7 (13...Qxd7 loses the f4 pawn) looked fine for black. My opponent was taking his time and looked like the kind of kid who studies, so I was a little hesitant about going into hypertheory with him, but I knew that the position got crazy immediately after this, so I figured he wouldn't know more than a couple moves further.
11... g5
12. Ne3 gxf4
13. Nxf5 O-O-O 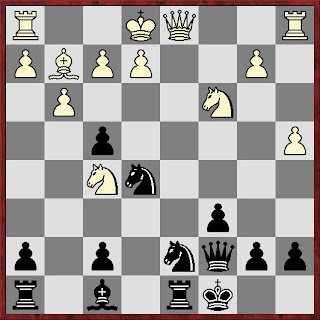 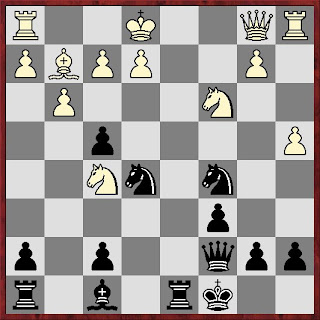 16. Ne4 Nxa1
17. Qxa1 Ng6 I thought about this move for a while, and wasn't totally happy about it when I played it. Fritz wants me to take on g3, but I was scared of activating his rook. I was also scared of letting him have a pawn for the exchange and defend it with e3. So this seemed like my only choice. I thought my knight might turn out to be passive on the kingside --I'm hoping to play h5-h4 and start an attack, but if I can't, maybe I will  miss that piece on the queenside. I wasn't sure.

Also, just at this point, I noticed other boards were starting to get strangely low on time, while our clocks read 1:10 - 1:21. It turned out my opponent had just grabbed a clock from the club supply and assumed it was already set, but it was set for 40/2, not 30/90. This changed the clocks to 0:40 : 0:51, which made me feel I needed to just decide and stop looking for a magical solution that would give me everything I wanted. 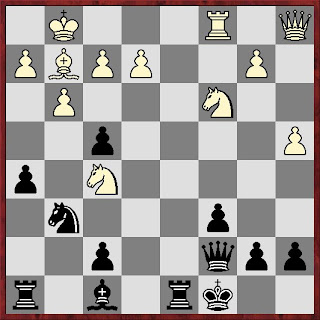 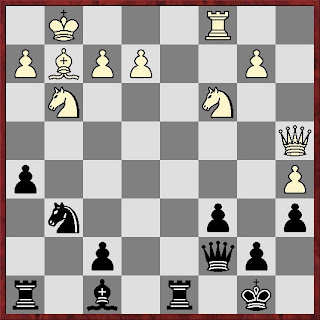 I knew I had nice attacking chances, but I figured I'm up a clear exchange and probably winning the a5 pawn in any endgame, so trading queens was completely winning. 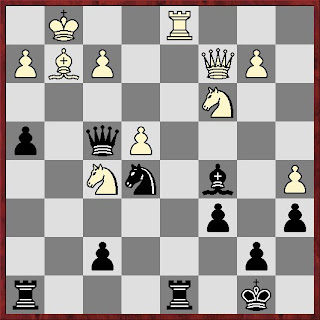 Yay! So then I could relax, go home, look at the game, read the USCL game of the week (kind of a superficial pick--Schroer makes two thematic piece sacs, but it's crazy that Kacheishvili allowed something so obvious. more cute than beautiful.) However, I enjoyed Erenburg's bitter comment and think it's mostly sad but also slightly funny that Jeff Ashton's spirit has so clearly been broken by Aigner's rebuke. I say, "Toughen up Jeff! It's boring without you," write this blog post, check on James (1/3) and Justus (2-2, losing a great game to Kacheichvili in round 1 and Kudrin in round 4), and clean my apartment a bit.

School is going very well. I'm piling on the homework, which feels very useful but eats up a lot of my time. I'm trying hard to enjoy each class, which I'd been forgetting to do, instead just trying to get as much done as possible. I'm really excited about my 6th graders, they seem like enthusiastic and hard working kids, which are the two most important qualities. I have 10 of them who are rated between 1200 and 800, plus a bunch more unrated kids who are about to start playing in tournaments. The ten best mostly have the same problem: semi-frequent blundering, which causes almost every loss. Happily, this is a common elementary school issue, and the cure for it is playing all the time, which the new 6th graders are just now starting to do.

We're thinking, for the wedding, to rent a house on the beach in Long Island or the Jersey shore and pitch a tent and hire a caterer and have it on the beach. Does anyone have any suggestions/ ideas/caterer recommendations/extra houses?? (thanks!)
Posted by Elizabeth Vicary at 8:03 PM

I highly recommend the Spring House on Block Island. About a one hour ferry ride from Montauk. Absolutely incredible place. Next choice would be to take a ferry to Ocean Beach or Ocean Bay Park on Fire Island and have your wedding there on the beach. Plenty of rentals available.

"The ten best mostly have the same problem: semi-frequent blundering, which causes almost every loss. Happily...the cure for it is playing all the time..."

Liz, you really must compile all these pearls of wisdom into a book. I'd buy it!

this game is stupid i don't like your blog...

why is it stupid?

1. When's the wedding? Block Island can get pretty cold ...

2. The only potential problem I see with the one-round-a-day idea is that by keeping your score down with half-points, you might never get paired up. You might end up playing only lower-rated players against whom you absolutely must win - which, for me, is the least pleasant aspect of tournament play.

Let us know how it works out!