IS 318 won the 6th, 7th, and 8th grade sections of Grade Nationals by 2, 2.5, and 2 points, respectively. In the last three years, we have won 8 of the 9 sections for which we are eligible. (We lost 8th grade last year by half a point.) Justus Williams came 2nd in 7th grade and Isaac Barayev came third.

We couldn't have done it without the help of Matan Prilleltensky, who volunteered his time and worked tirelessly all weekend, getting up early to help prepare kids and analyzing games until 10 at night. He's an amazing teacher: patient, supportive, and strong. In the words of 7th grader Kenneth Martin: "I like Matan because he makes me feel good about my ideas even when I'm wrong."

A second big thank you to Mitch Fitzko, our excellent CIS instructor, who teaches one day a week at 318 and analyzes games with us on Saturdays, and to the amazing GM Miron Sher, who gives a weekly masterclass for our highest rated students.

Finally, a third thank you to everyone who has donated money or books to our program. People's generosity towards kids they've never met is really moving to me. In particular, big thanks to Stuart Chagrin, who has funded numerous Marshall trips and paid for kids who couldn't afford their nationals contribution. 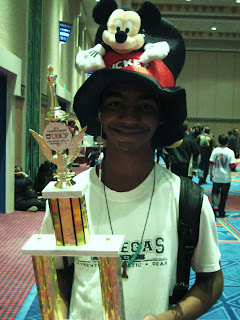 Former IS 318 student Azeez Alade is Ninth Grade Co-Champion! Azeez started 318 in 7th grade with a rating of 960. Two years and three months later he is 1965! Azeez is a wonderful person-- always smiling, super polite, patient, funny and thoughtful. He's also a fantastic teacher -- he's tutored several of the younger kids at 318 and I recommend him highly. For the bargain price of $20/hour, you can hire him to come to your home and tutor your son or daughter in chess. You won't find better value for your money anywhere. Contact me if you're interested (evicary@yahoo.com).

Remember last year when I was blacklisted? This year it was Galvin's turn. He's walking down the hall Sunday morning and Sophia Rohde, who runs some private schools in Manhattan (Columbia Grammar, etc), is walking the other direction. So Galvin nods to her and says good morning; she hisses back "city funds." Later in the day, Galvin is walking with Matan and passes her again. She says it again, "city funds." Matan was considering putting it in his Chess Life Online article, and so he asked her what she meant. She explained that she's a taxpayer and is angry that the school pays for part of the kids' expenses.

It's amazing to me not only that anyone could resent inner city kids for the "unfair benefits" the public school system bestows on them, but also that an adult would behave with such a lack of dignity. For what it's worth, our trip was funded by a walkathon the school held last spring, a private donor, and the kids selling boxes and boxes of fundraiser candy bars.

I lost the battery for my camera and didn't get another in time, so these pictures were taken on Jonathan's little point and shoot. (hence blurry) 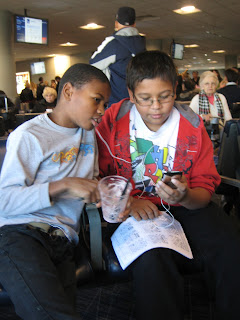 Teraab Feaster and Markus Pond (1584, up from 1274 in October), who scored 4 and 5 points in the 6th grade section, doing tactics in the airport on the way to Florida. 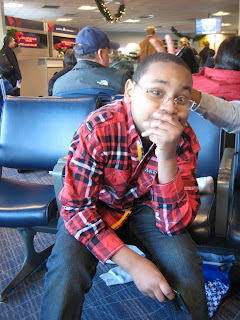 Anthony Asseviro, the 3rd member of the 6th grade team. 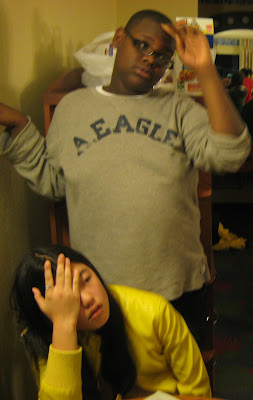 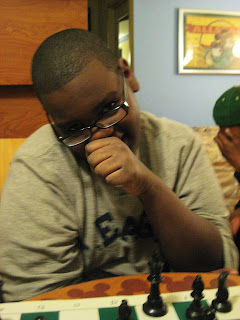 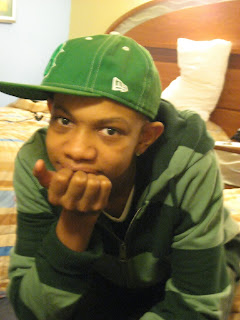 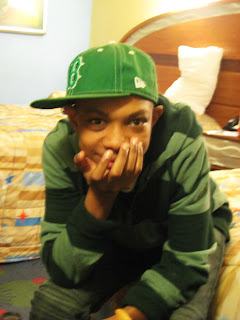 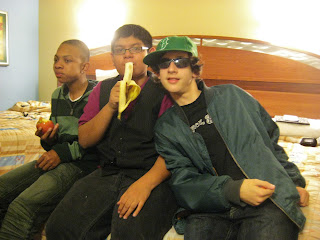 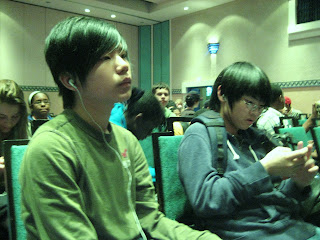 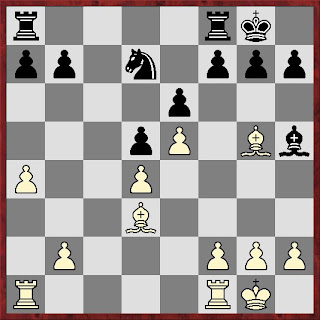 I told him a few ideas: trading the light squared bishops is good for black, and it's ok to recapture fxg6; the manuever Nd7-b8-c6 is often good to attack the weak d4 pawn, but probably after developing with Rac8; sometimes ...f6 makes sense. Then I said "I would start with Rac8, definitely."


Unfortunately, 17...Rac8 loses to 18. Bb5 (if the knight moves, Be7). Joel was really nice about the fact that I lost the game for him. It was a totally different kid who accused me of (on 3 separate occasions) intentionally preparing him with a bad line because I hate him and I'm trying to make him lose. In the same vein, one parent thanked me for being nurturing, supportive and exactly the kind of teacher she wished for her child; another complained to Galvin that the children were "terrified" of me. win some, lose some. White is already in some trouble here. If he moves the knight, d4 hangs, but otherwise the pawn structure is ruined. 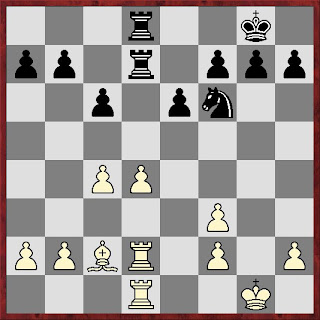 3. Jermaine Cooper had this position against Nick Marius in round two. 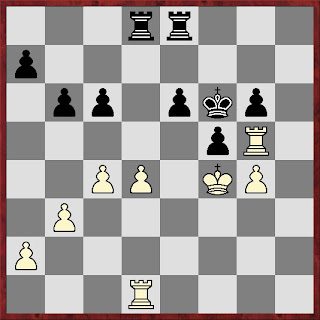 What's the best move? (answer at the end) 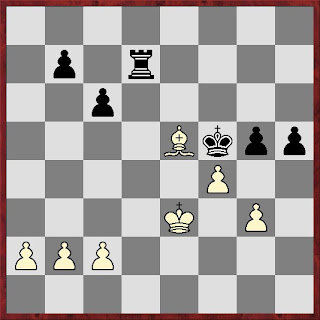 4. Markus Pond was black in the above position against Gabriel Katz. The game ended in a draw, but here he has a quick win. Where? 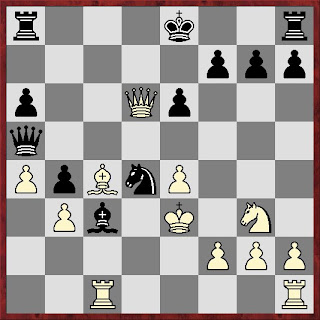 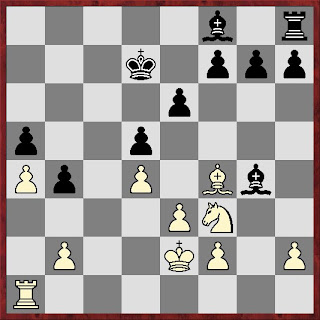 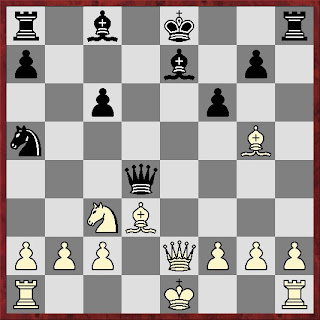 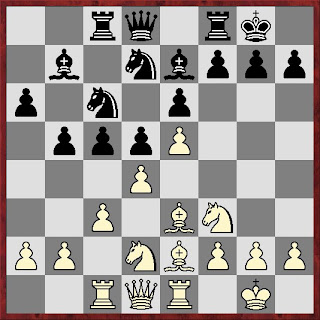 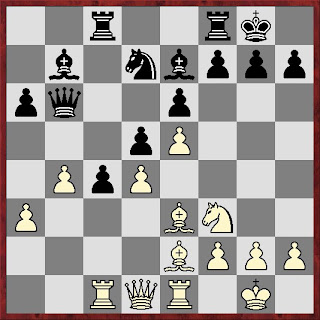 White should try getting some kingside counterplay with Ng5.
18. Qc2 Bc6 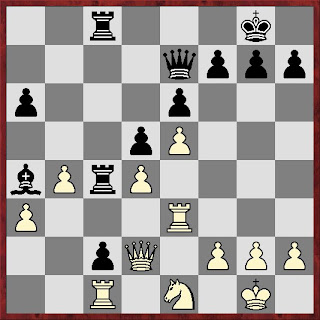 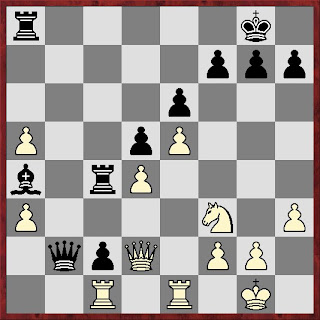 Where can we donate? Is it deductable?

I have a friend who calls Sophia Rohde, Sophia Rude.

Sophia didn't accuse your team of using taxpayer dollars, she accused Gavin's team.
She is someone with respectable character unlike you-know-who, and I doubt she would make such a claim without knowing some facts to back it up.
So why don't you stick your nose in your own beeswax, missy.

Those are the same team. And accusing someone of supporting the team with a school's funds is somehow a reason for disrespect? Even if the "claim' was true what's the point? Shouldn't we all be advocating for schools to support chess?

That's amazing especially the 6th grade team that was relatively weak and had only 3 members.

Modern politics is centered around stealing money from one group to give to another. But let's look at the big picture - your money is also taken from you to kill civilians in the Middle East (I think they call that collateral damage). Surely funding a public school (and their chess program) is way down on the list of injustices.

Trying to see the positive side of these "adult" actions at a junior chess event - by emulating the low level of conduct seen at junior tennis and other popular junior sports events, chess has now risen (or sunk) to their level :)


oh snap... he won 2 games at marshall tonight and withdrew with a post-tournament official rating 2203

We are working on a website for the 318 team that will have easy ways to donate through paypal Until it is up and running, you can donate by sending a check to IS 318 Chess Team
101 Walton St
Brooklyn Ny 11206.
We will send you a thank you on school letter head that you can use for tax purposes.

Tremendous accomplishment. Congratulations. I was wondering if you have seen higher math test scores by these chess players.

As a member of the IS318 PTA Executive Board and the SLT, I would like to say that the school did not pay any money out of the school's account. The PTA had a Walk a Thon last spring and decided to give some of the money from it towards the chess program. We are a Title 1 school and have many students that are from lower income families and felt it was a wonderful use of the funds our students raised.
I also want to congratulate Azeez! He is a wonderful young man with a great future ahead of him. He's been tutoring my son and I would definitely recommend him.

Sadly, little league has nothing on scholastic chess for making grown-ups behave with the emotional maturity of three-year-olds.