The student I am most proud of

When the kids won the high school, that was obviously the greatest achievement of my life. Then it was fun at the junior high with so many kids, but hard for it to measure up in importance, in some sense. But what made it an amazing weekend was one special and surprising performance. 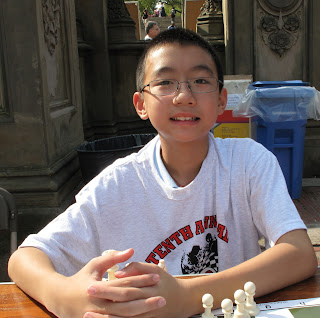 William started chess at the beginning of sixth grade, and he was very bad. He was so bad he lost his first 21 rated games. He came every weekend, and he lost and lost and lost. He also played really fast. I liked him because he reminded me a bit of myself at his age: nervous and clumsy and not comfortable in his own skin. He came to chess club every single day. He always tried his hardest; some days he would cry with frustration when he lost. ("I tried my absolute hardest against Anthony, but I still always lose.")
His mother didn't want him to go to nationals; both years she had to be talked into it.
William was in my homeroom this year. He had seven classes a week with me and continued coming to chess club every day. I used Jeff Coakley's "Winning Chess Strategy" as a textbook in his class; William didn't just do the reading each week, he memorized it. I could put up any position from the book on the smartboard and his hand would go up instantly ("I know this; it's mate in seven!").
Even so, he struggled. His rating broke 1100 and he was overjoyed; chess club applauded him. It sank back down below 1000 and he started asking to study every day in chess club-- partly to improve but also because he was afraid to play and lose more .

Thanks for sharing this Elizabeth, I enjoyed it. Seems to me its an important thing to remember that chess success stories are happening all along the rating spectrum.

Though the literal "win" was the 6/7 and the first place, to me the best part of the story was the
spirit of the win--the way he would keep playing and trying and learning and showing up to club.