An Ad on the London Underground 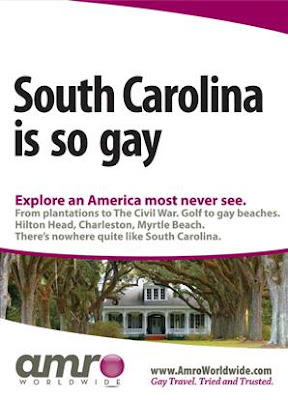 "Similar ads were posted for Atlanta, Boston, Las Vegas, New Orleans and Washington, D.C., none of which reported any negative backlash. But in South Carolina, reaction to the posters — dubbed “the gayest ever mainstream media advertising campaign in London” by Out Now, the Australian advertising firm that designed the promotion — was swift."
.
What a surprise. Really, nobody saw this coming?
.
Travel agency exec Andrew Roberts explains:
“From where we sit, and for all our many customers, being described as ‘so gay’ is not a negative thing at all. We think it is just great to be so gay,” said Roberts, who called the campaign a success, having reached more than 2 million people in London.
.
I love this kind of thing: when people are coming from such completely different places that they just don't get what the other side could possibly be thinking.
Read more here
Posted by Elizabeth Vicary at 2:12 PM

Liz wrote: "I love this kind of thing: when people are coming from such completely different places that they just don't get what the other side could possibly be thinking."

Then, see this (which also relates to your earlier thread about the Obama campaign):

The New Yorker cover has turned into quite a scandal, hasn't it? As both a long time reader of the magazine and a longtime Obama supporter, I love it, though, apropos Elizabeth's observation about the perception gap and the cultural chasms that divide us, I also realize the McCain people probably feel a greater obligation to denounce the thing than we effete snobs from whose subculture the satire emerges. Ironic, no? I dunno, maybe not.

Gay South Carolina? Yes, tolerance outbreaks are being spotted in the unlikliest of places. We'll survive; maybe even thrive.

And with tourism using niche marketing like this, we need more chess tourism. Yes, there are those chess cruises, but how about chess vacations for those of us on a budget?

As a longtime supporter of Obama, my reaction to that New Yorker cover was, "What the hell?!" And while I don't read the New Yorker, I don't think I'm that satire-impaired, being a regular reader of Harper's. This is an attempt at satire that disregards how satire works, and thus fails to make any kind of point. If you're poking fun at a particular group, that group has to appear somewhere in the caricature.

The best analogy I've heard to this magazine cover is this: Imagine if Jonathan Swift had actually eaten Irish babies, in the hope that rich Englishmen would thereby realize how horrible the Irish had it.

I'd have had no problem if they'd left it at the Civil War and golf being gay.

I don't know any gay people who play golf.

@anjiaoshi: I know a lot of people are having a similar reaction to yours, and I guess this is something reasonable people will simply disagree about.

I mentioned that I read the magazine because I think for people who see its covers week in, week out, this one is fairly unremarkable. If it hadn't been for all the brouhaha, I suspect it wouldn't have gotten much of a reaction from me when I saw it, and I'm by no means indifferent to how the right has smeared Obama. On the contrary, I've been in high dudgeon over it all winter and spring.

Of course there are regular readers of the New Yorker who feel as you do, so I'm at a loss to explain the various reactions.

The analogy with Swift escapes me, I have to admit, but it's probably not worth belaboring.

I did hear an NPR interview with NYer editor David Remnick that I found persuasive. You probably won't agree with it, but there it is.

Anyway, with the country in the tank there are probably more important things to fight about.