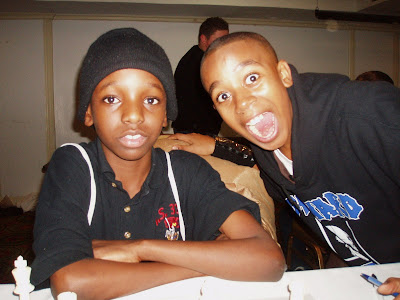 * won the k-6 section (although Hunter and Horace Mann didn't show up, so it wasn't the fight it could have been),
*came second to hunter in the k-8. the truth is that we have no chance again them at nationals if they all show up and play in our section. but they might not all show up, or they might try to win the k-9 or k-12 (it's supernationals this year, meaning the k-5, k-6, k-8, k-9, and k-12 are all held simultaneously). still, it's kinda depressing to know that it might become apparent that we have no chance to win. not that i have to win, i'm really not hypercompetitive, maybe I'll be bummed out for a couple days, but that's all. still, it would depress me to think throughout March that there was no chance. (2 days later: Actually, I forgot that Getz and Landesmann are 9th graders, so nevermind!)
*came third in the high school behind the super-strong Stuyvescent (3 2000s? 1 1900?) and Hunter.

Congrats on K-6 and strong finishes in K-9 and K-12. Writing that, I just realized that there is no K-8 at Cities. Isn't Alec Getz in 9th grade? So Hunter will presumably have a strong K-9 team but do they have enough players to compete in both K-8 and K-9? Anyway, the Cities are insane as tournaments go. I don't know what it was like on Sunday but Saturday the hotel was a zoo, with a world peace conference and several weddings (was it some Moonie thing?) and some religious convention. At one point, I got in the elevator with a bunch of 20 something guys and they kept asking eachother "hey, dude, have you been blessed yet?" "Yeah, I was blessed yesterday." Who was doing the blessing?