I guess it was ok

I got back from Junior High Nationals in Minneapolis last night. I feel braindead and spaced out today. I was on the first flight, which arrived at Newark at 5:10 and at school at 6. I flipped a coin with Pete Kelly to see who was going to wait with the unpickedup kids. I won (heads) and he waited for an hour and a half outside the school for some tardy grandmother. I would have freaked out.

So the under sections performed pretty badly. Some kids played ok, but they were nothing like the under kids of the past. Last year we had Danny Feng, David Kim, Aleem Awan, in the under 750, and those kids are now all 1600-1900. The kids this year just aren't (for the most part) as serious. I got frustrated looking at the games. I found myself saying things like "How many times is your piece attacked? How many times is it defended?," or "Did you think about capturing the free pawn?" It's hard for me to say any of those sentences more than a couple times to a kid before I start to feel like they aren't paying enough attention and I get annoyed.

Isaac came into the team room and yelled "I won!!! ... ... sike!" I was so deflated, I didn't even yell at him, the way I normally would. I just said "That's not funny. Never do that again," in a numb monotone.

I haven't seen all the losing games, but the ones I have were pretty lame. And the scale of the chokage is so incredible. I feel disappointed with the results, but I also feel stupid and super-negative for feeling that way. We won nationals and I am disappointed. What's wrong with me?

There were definitely some big bright spots. I didn't see the best players' games (Greg Shahade volunteers his time to help me at nationals, and he works with the top 10-12 kids), but I hear they played well, especially Nigel, Alexis and Justus. Alexis went 6-0 and won clear second in the K-8. Jermaine Cooper had a breakthrough tournament in terms of game quality; every round I was looking forward to him coming back and showing me his game. Anita played very long, careful games, as did Aleem.

Next year I need to do a better job with the beginners.

Next weekend: high school and girls' nationals in Columbus, Ohio.

here are some pictures: (more here) 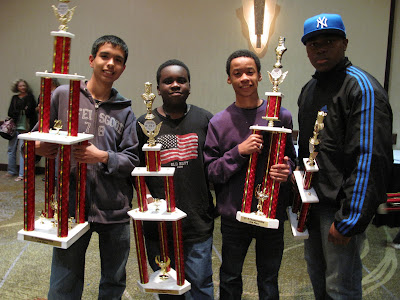 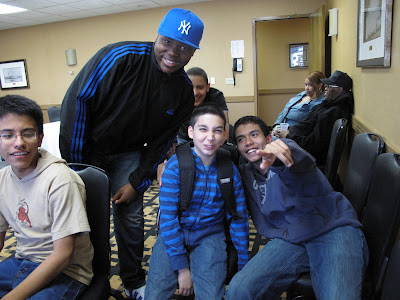 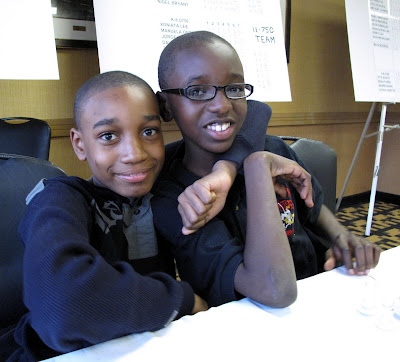 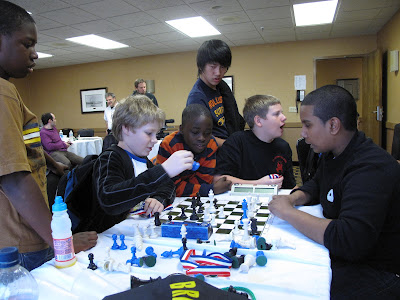 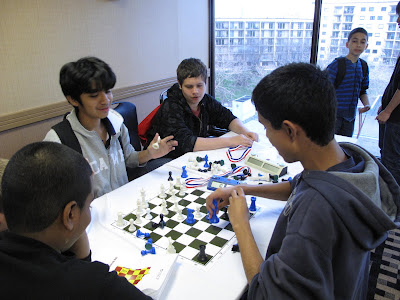 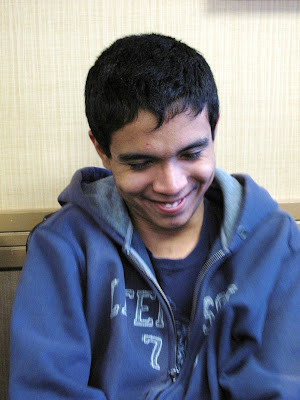 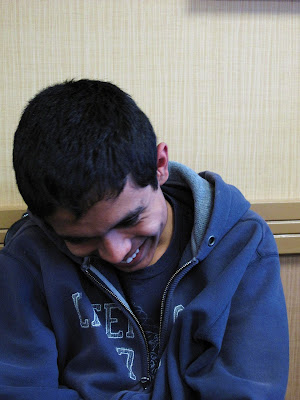 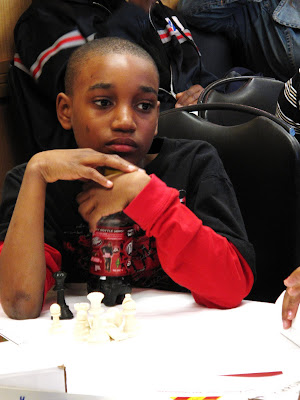 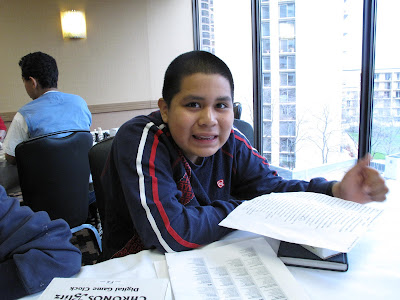 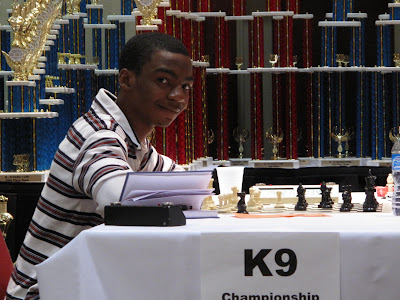 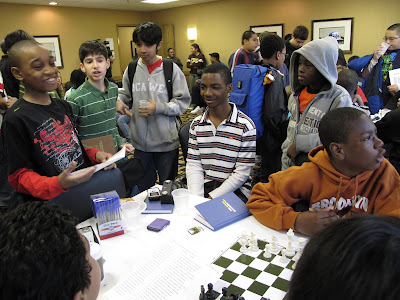 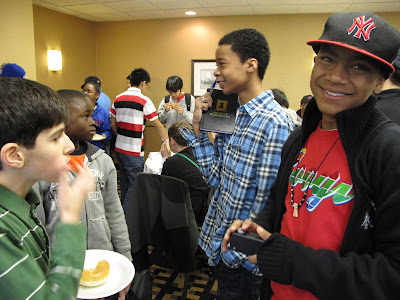 Isaac, Joel, Nigel, Randy
Posted by Elizabeth Vicary at 11:55 AM

Don't be too hard on the kids or yourself. It's a game, isn't it? Did the kids have fun? It looks like they did from the photos.
Brian Lafferty

on the one hand, absolutely, but you wouldnt say that to a chemistry teacher.

to be accurate it was only one of six games that would have given 318 the national championship.

Did those beginners know what was at stake? Did they know the history of 318 and the nationals? Did they perform under their strenght you saw of them during the year? Was it their first tournament? ...

All questions i have by wondering why K9 performed so lousy. Maybe its just the mentality you have to work on. Or maybe they just dont possess that drive that make them good players.

I ment K9 last round.

Maybe I don't know what I'm talking about, never having been a chess coach and never having gotten up at 2 in the morning to fly with 55 kids to a multi-day chess explabbaganza that ends with six losses in the last round when even one win wins them the national championship etc. ...

All that said, however:

It sounds like you're more upset than some of your players are. And that you know that. And that makes you feel like you're at their mercy.

That isn't right. It's no skin off your chin how well they actually do (I know that that may not be true, but you have to act like it is); what matters is that you teach the lessons that arise from those results. It sounds like you think you have nothing to teach them at this moment, but you do.

I think the right response to Isaac, for example, might have been a blunt reminder of how many good players from other schools would have liked to have been at this tournament, who sacrificed how much to get him to this tournament, and that that's a sacrifice that they may not be willing to make next time. Not because he lost, but because he thought his chokage was funny.

He doesn't have to spend the next six months in a suicidal torpor, but if losing a game that could have won his team a national championship doesn't tick him off a little bit, maybe he doesn't need to go to these championships.

When I coached kids' baseball, I told them that I didn't care how well they did, but anyone who wasn't trying was gonna get yanked off the field, and if that meant we had three guys out there and lost 100-0, then we lost 100-0, and the three guys would know who to blame for it. I never had to do that, because they knew that I would have. But I would have.

The whole point of doing this is for them to take something seriously and work hard. I assume you know this, but this seems to be the thing they need to hear. I obviously have no idea whether canceling a trip to another national tournament until their attitudes get better is the right solution, but it could be.

It's understandable to feel frustrated about the results especially when you've put so much of your time and effort into the preparations.

The really close misses are the most taxing on your nerves and it's probably what's temporarily broken your spirit. Don't worry that will pass. Try and focus your attention on all the success of the tournament and this will blunt the pain of the failures... if you can even call them that. Even failure is a part of the equation. But I think you already know this.

I'm sure some of your kids are quite disappointed in their results as well whether or not they show it or not. Not everyone has the same passion for the game as do we 'hardcores'. In time you will be able to see (or you already may have) who has the heart for the game and choose the team accordingly. It's all a learning experience and as the frustration dissipates the lessons will become clear again.

From what I've seen about you so far I feel you are an amazing teacher full of passion and drive and will continue to polish those diamonds in the rough.

...Oh by the way I just came across the 1988 documentary "Kasparov American Gambit" in a three part series (30 min total) on a Chessbase news article here
.

Don't know if you've seen it yet or perhaps maybe it's been awhile but I thought it might make for a cool thing to share with your class one day.

In the Under sections, players/teams need to be under rated to be competitive. So the result of your teams are not totally unexpected.

I believe wholeheartedly that the best and hardest lesson someone can learn is 'touch the bases'.

In baseball, when one runs the basepaths, trying to score a run, one must remember to do the fundamental thing of touching the bases.

Failure to do so can result in an easy and fairly immediate out.
The term becomes a metaphor for all the basic, fundamental things that we all ought to do, but many fail to do.

So many times it's easy to drift off into daydreams of complex strategems or ambitions to win.
It's more effective to 'touch the bases'. how often is one attacked?
Is there material to be lost? To be gained? At what cost?.

I think that it's a challenging thing to teach the fundamentals of anything to a less than avid participant. I often wonder how Jaime Escalante motivated so many kids (not just the "stars") to take those advanced placement tests.

On some level, he got them to see the fundamentals, to touch the bases as they ran the mathematic basepaths.

In my career in law, the more I learn, the more I see even complex cases in fundamental terms. Meet the deadlines. Discovery the basic story. Get the issues simplified and defined. Touch the bases.

I don't think you can teach people to love the game, and why it can pay such dividends that it deserves focus and effort. But if you can show that you love it when you, too, can get the fundamentals right, and they will, too.

Nobody says that all your players have to be Hank Aaron--but it's "right work" to try to get each to run the path, and touch the bases.

It's disappointing when it did not work this year in your lower classes, but it is a worthy work to continue, and to learn. That's perhaps your own basepath--that I cannot say without projecting. But in life, in my own different issues of training and detail, I find more and more it's the path stretching before me.

Are you saying there's something wrong with spending six months in a suicidal torpor?

u r a complete and utter failure.


i'm impressed that you are a good chess player and have a steady job and a companion. pretty impressive really

I know your situation so well,my school chess team has been through many of the same things.

As for explaining things like "did you look at the whole board"?
"Can you capture anything"
Some times it's like talking to a brick wall rather than a young chess player.
Other times/players it works,and when it does it feel great.

Don't be hard on yourself,you are a great chess teacher,the results show that.
Some years are better than others.

The best trick i have learnt while teaching chess is to keep my hair cut short,so i cant pull it out from frustration!!!!!!
Having said this i would not change what i do and why i teach chess.