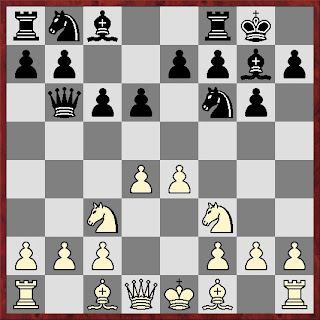 White gets five moves in in a row to checkmate the black king. Black does not move at all. White cannot put the king in check before the last move. It's like a Coakley Double Whammy, but Quintiple. We do a couple examples together so kids know what solutions look like (e5, exf6, Ng5, Qh5, Qxh7 or Nh4-f5, Qg4xg6 xg7), and then they have 1/2 - 1 period, a partner, and a board to find as many other solutions as they can. With some classes, I said you have to find as many solutions as the hundreds place of your rating (a 1450 has to find 14), after you did that you could play. Everyone had a great time and learned mating patterns.
I have a new project/ experiment: I've picked a 6th grader (now rated 1093) and am going to see how high I can get him in a year. The program inclues: private lessons 2 lunch periods a week, extra tactics, making sure I see all his games, and always pairing him up in club.  Any opinions on what constitutes success? Galvin's promised to buy me any chess book I want if he gets to 1600. I'm trying to get Galvin to pick his own kid to compete with me, but he's refusing because he knows he'll lose.
a cool video for you.
Posted by Elizabeth Vicary at 6:36 PM

found a (couple of) four-mover(s)

I wouldn't get down about the game, the deck was really stacked against you before it even started. Not playing much in the past couple years make things tough. That combined with the time penalty and playing board 3--not a fun situation.

Anyways as far as the opening is concerned, this pawn sac line is fine and I don't think you should really blame the opening. I feel like black equalizes in this line but white gets an imbalanced position where he/she has chances to outplay black. The h3-g4 nh4-g2 stuff is harmless and black is atleast = in all the positions I've looked at. If I were you I'd look at either Bf1 with the idea of playing a quick c3-d4 or Ba4 after a6. I still think black is = in these lines but there is a lot more room for black to mess up.

As far as the moves in the game are concerned, Qc6+ was a pretty big inaccuracy, my king is always better on f8 than e8, and then Qf4 allowing me Rg4 with tempo was another one (Qd3 is better). Rd1 was not great either, the best chance to hold at that point is just Rb1 but it's already not much fun to play as white.

I hope the fellow gets to 1600, and you get the book, though if he does, perhaps you'll grant him the power to have raised his own rating, with your help :)

You have written very little about USCL this season. Perhaps you should change your current blog title "USCL news and gossip" to Elizabeth's chess blog.