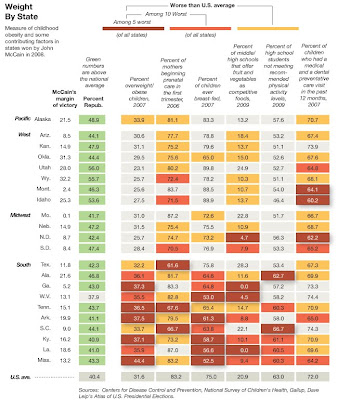 Which leads to the punchline/thesis of the article, which is "Maybe conservatives aren't attacking Michelle Obama's seemingly unobjectable anti-obesity campaign because they attack Michelle Obama reflexively, maybe it's because THEY'RE FAT."
which at first I thought was a little mean ("no, you're fat!" "no!! you're fat!") but keep in mind, Blow is attacking leaders who are taking a stand against important public health education.
I was a little surprised that I couldn't find any direct look at obesity rates among registered voters by party.
Posted by Elizabeth Vicary at 7:24 AM

Actually makes sense - consider if people are sensitive about the notion of not wanting others (i.e. the government) telling them what they should do, it is unlikely that they would be swayed as much by general popular concern about health, weight and appearance. "it's my body and I'll do what I want."

This is a great opportunity! Everyone should encourage Tea Party supporters to both opt-out of government medical-care plans and to put on lots of weight.

T-Party fans should be challenged to chow down on a second helping of saturated freedom.

C'mon T-partyers: pack on those "Patriot pounds" and flesh out your "Rush handles" by filling your "nay"-holes with freedom fries!

There is a deep-seated need among liberals to attack the messenger. Instead of addressing the points - what business does a bureaucrat in DC have dictating your food choices (and don't kid yourself, what is a recommendation one day is a dictate the next) - the response is "you are fat".

Also, Michelle is not a 'leader', she is the wife of the president.

So why are liberals attacking them then? Oh yeah, now I remember, because they didn't do squat that they promised us.