Our friends at Endgame Clothing have two new chess t-shirts out! 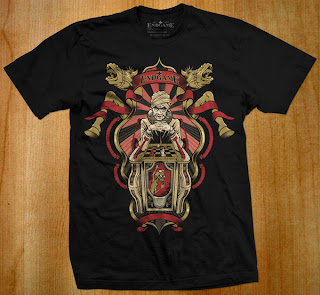 The Turk was one of the greatest hoaxes of all time. Built in 1770, the Chess Playing Automaton, nicknamed The Turk, was said to be a machine that could best any man at chess. While in fact, The Turk was an elaborate mechanical illusion that swindled people on both sides of the Atlantic for nearly 100 years before being destroyed in a warehouse fire in 1854. The Turk's victims included both Napoleon Bonaparte and Benjamin Franklin. Edgar Allen Poe even tried to debunk the machine, but was wrong with several of his assertions. 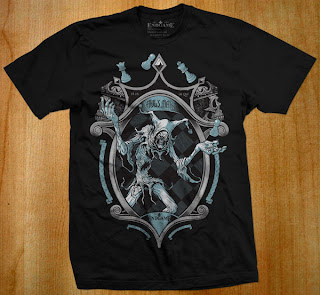 As most players know, the Fool's Mate represents the fastest possible checkmate in the game of chess.

You can get 15% off by using the coupon code CARNIVAL during the month of May!
Posted by Elizabeth Vicary at 3:59 PM

As long as the opponent believed he is playing a machine, he had the same experience as playing a computer today.
And the sophisticated mechanics inside the 'Turk' are until today second to none...on the contrary, today we are flooded with 'Made in China" Plastic throwaway stuff, while the Turk was definitely a high quality product.

To call it a 'Hoax' doesn't give it the credit it deserves until today.