A Sveshnikov from the World Open 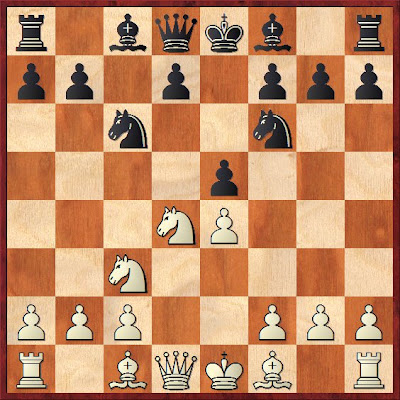 Oh my goodness, a Sveshnikov. I have a very strange love/hate relationship with this opening. I know some theory but I'm definitely not prepared to play the typical endgames. I don't understand what's going on in any profound way. It's kind of surreally anti-positional, so when I win, it's usually because my idea was so weird that my opponent couldn't find it. I know long term I should switch and play something strategic and logical like the Accelerated Dragon. But sometimes it's really a lot of fun, and perhaps I have a sentimental attachment to it also... 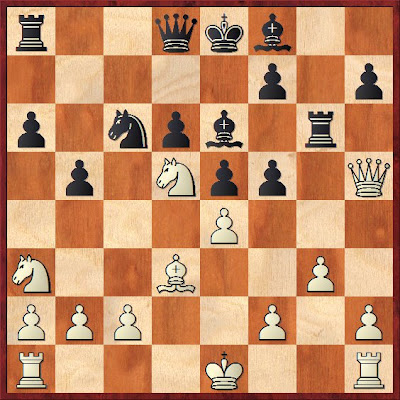 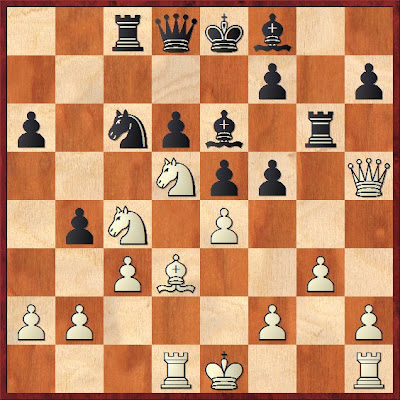 And now I feel triumphant, since my opening strategy has worked and now I can win his queen. Of course Rybka calls this -.68, but for me at that moment, I was wildly happy.

Why not, right? He has to take back. But at this point I start to become afraid. Last summer I had three positions where I was up a queen for a rook and piece, and I lost all of them horribly. I remember the last one especially-- it was at the Continental Open on Sunday morning, I was playing some tiny kid who was not really all that good, After the game I completely lost it. I cried all through lunch, sobbing into the calamari and two glasses of wine. Oh my god, how humiliating that was.

So how am I going to organize myself? I'm realizing that this is nto going to be easy at all-- my bishop is bad, my knight isn't on a good square, my king is unsafe, and while white's kingside rook is undeveloped, all the rest of his pieces look great. 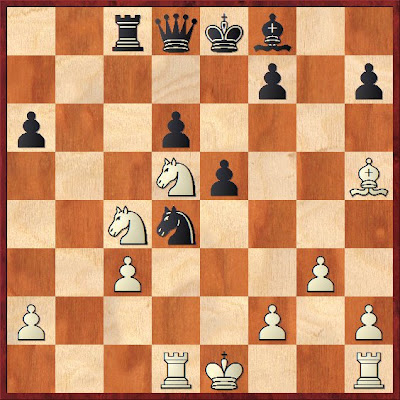 So here I have a long think. Of course, my initial intention was to take on c3, but then I decide that I really don't want to exchange a pair of knights or a pair of rooks, (on the general theory that when you have one of something and your opponent has two, you shouldn't exchange.) So then I'm thinking, ok, but what else to do? I'd like to play Bg7, but I might need the bishop where it is to defend d6. And I start looking at Qg5. My thinking goes like this: 22... Qg5 23. Bf3/e2 f5. Then I'm interested in either f4 (to start an attack) or e4 (vacating e5 for my bishop, opening the 5th rank for my rook/queen, blocking the long diagonal for his bishop, maybe someday preparing ...e3)

22...Qg5?? Of course as soon as I make the move I realize I'm not threatening to take on h5 because of Nf6. I spend 10 minutes screaming at myself inside my head. Then I look back at the position and realize he's going to play f4 and it's very very strong. 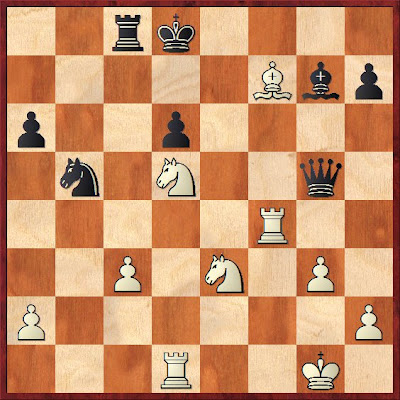 He thought for a very long time here. I had seen Rf5 and was sure he was going to play it. I hated him so much, and also myself. I could not sit at the board, it was all so disgusting. 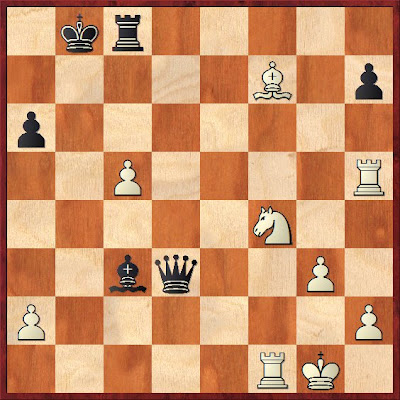 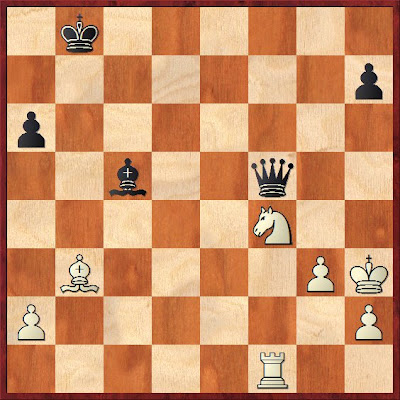 And I agreed to a draw here, which is pretty stupid. It seems like I just totally lose my fighting spirit after four hours. I torture myself endlessly with accusatory mind chatter "youregoingtoloseyouregoingtoloseyousucksomuchihateyou." I gotta figure out how to become less neurotic. Ok, I admit that having no clue how or where to start in thinking about this position made things much worse, and also that if I knew more about endgames I would understand that I am the one trying to win here, and that I DON'T NEED TO FREAK OUT. I can push my a pawn, and then try to win his, somehow, cleverly: [40...Bd6 41.Rf2 a5 42.Bc2 Qd4 43.Rf3 a4 44.Bf5 (44.Rf1 Qc4 45.Rf2 Bxf4 46.gxf4 Qxa2) 44...Qb2 45.Be6] ½–½

Posted by Elizabeth Vicary at 12:00 AM

You need to work on separating your emotions from your chess. You obviously recognize that, but seem unsure how to go about it. There is little concrete advice I can offer, but here is a broad tip:

Start by studying and analyzing very concrete chessboard emotions that you can recognize have given you trouble on multiple occasions - much the same way you would identify, analyze and strive to correct specific weaknesses in your play.

For instance, do you regularly get frustrated and depressed when you have bad positions, to the point you don't feel like putting out the effort needed to defend them?

Or, do you get caught up in a "blame game" against yourself, whenever you blunder (I can see from your latest post that the answer to that one is "Yes!")

Once you've identified a particular situation and/or emotion that regularly stymies you, you can monitor your own state of mind so as to maintain a sort of "automated alert" for just that situation or emotion. If you're conscious of the emotion, and of the need to lean against it whenever it appears, you'll find the seemingly intractable emotion will gradually lose its power over you. After all, isn't that akin to what Freud said (emotional issues draw virtually all their power from operating below the conscious level)?

You can set that "automated aleret" for dangerous chessboard emotions, by keeping up a conscious dialogue with yourself while playing -

"What am I feeling? Am I nervous? Stay calm. I'm beating a guy rated 400 points higher than me, but he's no genius. Just play my game the same as I would if he were rated 2000."

"I just blundered. I feel like I suck - but I already know that feeling I must suck after blundering has caused me to do still further damage to my game, on past occasions. So I'm not going to yield to it this time. I'm going to start fresh with the position I have, and do everything I can to turn things around. Now my opponent thinks I suck, so HE'LL probably get overconfident and relax..." etc.

For some concrete illustrations, see my December 2005 Chess Life article, "The Sense of Danger, Part II: When Emotions Attack."

This is not to say that emotions can, or should, be completely separated from anyone's chess play. GM Jonathan Rowson makes some profound observations along these lines (i.e., about getting your emotions to work FOR you, rather than just stopping them from working AGAINST you) in his exccellent (but perhaps overly erudite) "The Seven Deadly Chess Sins."

One other thing: In your final position against Gary Point, I don't see why you think Black should win. A draw looks like an appropriate result to me (although there's certainly enough play left to justify continuing - not to mention that you were a little higher rated).

It was nice to see you in Philly. Sorry we didn't have more time to chat. Check your spam folder for some photos that I sent you earlier, including one of you and Angelica.

One of the best games ever with this line was Brodsky-Kramnik, 1991.

"someone who doesn't see things." Thanks a lot, you fucking asshole.