my Palestinian solution and the Incredible Rochelle Ballantyne

Alright, so I apologize in advance for the way this post is going to turn out. I know that people who think they have the simple solution to complex historical/social/political/religious problems are-- pretty much by definition-- stupid assholes. But here's my take anyway:

2. A large part of the problem is the severe economic hardship in Palestine. This gets translated into violent political action for two separate reasons:
a. Poverty makes people angry and desparate.
b. Hamas does a huge amount of social outreach and charity work; it basically is Social Services in Palestine, and this work is where a large part of their popular support comes from (In a country which has been historically relatively secular, as far as the Middle East goes). If you feed starving people, they're going to like you, join you, vote for you, and possibly wire themselves with explosives.

3. The easiest, nicest, and cheapest way to end the attacks on Israel is to invest heavily in the economy of Palestine. Raise the standard of living, and people will be too happy and busy at work to fire missiles at Israelis. Plus they won't desparately need Hamas, so its social and political support will erode.

Also, I know it seems like a little money won't heal a 1000 year old conflict, but think about the major violent cultural feuds in history that have blown over... Europe. They used to fight all the time, look at them now. All economically integrated and lovey dovey. 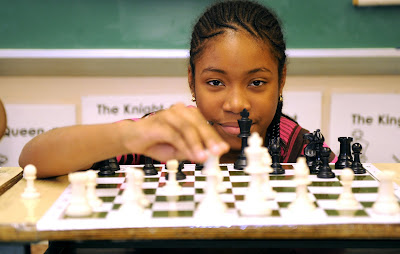 How awesome are you if you've won your last seventeen rated games of chess? Five in club, plus she's won the last 3 Chess in the Schools tournaments. and these are not easy tournaments. She was 1717 at the beginning of December; her rating after today should be over 1900.
Posted by Elizabeth Vicary at 6:00 PM

The people who help make all the violence possible are the arms manufacturers and arms merchants around the world. It's a very good business to be in if you don't care how your product is used.

Damned if I know the answer. I do know that there has never been a weapons system developed that has not been used. That doesn't speak well for anyone's future.

But tomorrow is a day for hope. Let's see if we can make it a better world and recover our moral compass as a nation.

Even more important than her rating, IMO, is that she looks like a happy kid. Keep up the good work.

Go Rochelle! The young lady is already stronger than me, hope she keeps having fun.

I have no answers for the situation there but as a side bar comment I can see why your chess game is so strong. You like to fight. I can't wait to see what sort of fireworks this sets off.
Applause for Rochell Ballantyne. With a rating that high what title we she have earned by the time see leaves school?

So how much have you invested in Palestine?

i guest now i am really going to have to work to beat rochelle.gaining this amount of points in this amount of time is impressive. it took me almost my whole eight grade to reach 1900.

p.s. 3 tounaments in a row is unheard of. can you give some names of the other competitors

Leaving aside the current political situation which is way complex your remark about Europe is interesting. It is historical fact that Europeans used to fight one another a lot and now they don't seem to be fighting as much. But consider that this period of peaceful behavior is only since about 1945 (if one doesn't count Hungary 1948, Czechoslovakia 1972, the breakup of Yugoslavia and the Serbian/Bosnia/Croatia thing, the Turkey Cyprus thing) which is only a tiny fraction of their history. Also most of the major religious and political issues were not settled in a peaceful way over a negotiation table (recent exception: breakup of Czech Republic and Slovak Republic who went through a amicable divorce) - England ended the true monarchy with the execution of Charles I, France had their very bloody revolution and period of dictatorship under Napoleon, Bismarck unified Germany with a series of wars, etc.

So history isn't great for predicting a peaceful solution to this situation. The one thing one can be hopeful is that a nation might be like a person - it grows and matures and sometimes if it is lucky it gets that militarism out of its system - and learns to like itself and accept itself. The Swedes once were quite aggressive and militaristic, but are no longer. Perhaps in our life time we'll see Germany and Japan remain that way, and perhaps in the distant future, so will the mideast.

At least you got your definition correct and I quote : “I know that people who think they have the simple solution to complex historical/social/political/religious problems are-- pretty much by definition-- stupid assholes.”

Your solution to the Palestinian problem has been tried by the United States for many years. The US has given billions, only to be used by Yasser Arafat and his successors, to buy rockets and weapons, to kill Israelis.

Let’s look at Europe as a shining beacon of Hope. Just last century, there have been two World Wars, with over 100 million deaths. Now that looks like a good way to go. Following the European and your lead, if the Israelis kill 1.5 million Palestinians, they will wipe all of them out, in the Gaza Strip, solving the problem with a fraction of deaths that the European had in their ideal solution.

Yes, I love those simple solutions.

The Palestine/Israel conflict is not one of 1000 years, it is one of a few years. You see the land used to be called Palestine then a bunch of people moved there, stole the land and called themselves Israel. The way to solve the problem is for these people to return the land.

Great job Rochelle! I assume that Rochelle's success is based on a lot of hard work, a supportive family, great teachers and coaches at IS 318 and the support of the Chess in the Schools organization (free tournaments and other funding). What are the USCF candidates' views about chess in the schools and scholastic chess?

Off topic, I read that Jay-Z attended IS 318. Did he learn to play chess there? Does he support the chess program?

The problem is that Israël effectively suffocated the Palestinian economy by blocking the borders etc.

In my view the solution would be to create a new unified secular state where Moslims and Jews would be treated equally and with a government which is strictly non religious. If you create two independant states One of them would be effectively cut in two.

Actually, Israel itself 'created' Hamas (by depriving the Palestinians of a own fully independent state) and Hezbollah (by its 1982 invasion in Lebanon).

So, before Hamas sent rockets into Israel there was the Israelis taking land and depriving the Palestinians of a own state (a real state with full sovereignty, and not this humiliating dependence within scattered territories that the Palestinians are granted in the West-Bank today!)

As long as Israel continues to deprive the Palestinians of a fully seperate and independent stte, they will also deprive themselves of a state-partner which whom they can negotiate on reasonable and civilized terms...and they will have to cope with what they have created...Hamas and Hezbollah!

The situation would be easier to solve if one side to the conflict did not have the delusion that they are the chosen people of a jealous, angry, genocidal, homophobic, murderous figment of their imagination; and the other side did not think their so-called "prophet" (who would have been prosecuted for child molestation in today's world for having as one of his many wives a child) had anything to do with a rock on a hill in Jerusalem.
Part of the solution to the conflict in Palestine is a European notion called The Enlightenment. Once the religious claims of both groups lose their power to enthrall and lead their adherants to kill in the name of their imaginary despot, it will be a lot easier to see each other for the kindred spirits that they truly are.
There will still be the injustices of history: like the Europeans displacing the Indians here in America, the Israelis displaced the Palestinians. Both justified their taking on claims of racial identity.
But that is history; and it if we were to right every wrong and give back to the original owners what is rightly theirs (or their descendants), where would it stop? We cannot vacate Manhatten any more than the Israelis can (or would) vacate Palestine.
I have long believed that the solution to conflicts based on religion and culture and race lies in the direction of eviscerating the claims of these divisions. Religion is the most susceptible of these to emasculation, simply because it is the easiest to be proved fraudulent. Racial identification in the Middle East is not so difficult to overcome, either; once the mistaken linkage between racial identity and the practice of child genital mutilation is broken, there is no racial difference between the two groups. And cultural differences can be a place for appreciating our rich diversity as much as anything else.
Intermarriage will be the way that this can be accomplished; which is one reason why the racist insistence of parents that their children marry within their perceived ethnic or religious groups must be condemned for what it truly is, and for the kind of thinking that it only helps to spread.
Once religion is accepted for a massive fraud, and racism is called for what it is -- no matter who perpetuates its claims, then and only then will there be lasting peace in a blood-soaked land.