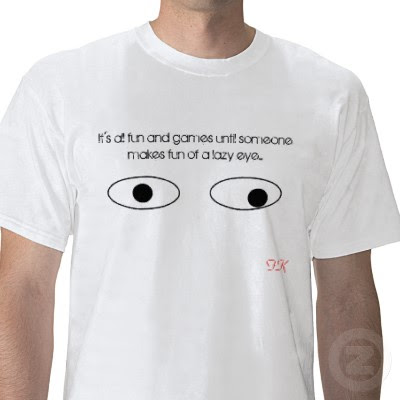 Sorry it's been so dead here recently. I've been spending a lot of the spare time with the new boyfriend. That's going extremely great and I'm really happy about it, except when I look down and then I get panicky.

I feel like I had a lot of stories to tell you all from the last month. but they lose their energy when they sit around, sadly. but here's two:
I went to the optometrist last week to get more contact lenses. She says to me "Do you know you have a lazy eye?" I'm pretty excited by that idea, so I say "No, show me!" to which she replies "Unfortunately, you'll never be able to see it. But your friends have never told you?"
You always wonder, right, all your life, whether there is something wrong with you that no one will say: you have bad breath, or you smell bad, or everyone thinks of you as Interrupting Girl and despises you for it. And now here's a trained medical professional insisting that it's true.
I didn't know what to think, but gave a lot of my friends a hard time about being cowardly liars, just in case.
I should add that this same optometrist office, although a totally different optometrist, insisted to me a few years ago that I had a hyperactive thyroid (because of my wide, starey eyes) and should go to my doctor immediately, right now, today. I pointed out that I didn't have weight fluctuations or bouts of weird sweatiness, but he seemed very sure of himself. Then I went and my doctor said "I think you just have big eyes."
Next story: I am blacklisted at grade nationals.
This story is almost too ridiculous to tell. I'm at grade nationals, maybe Friday night, I'm minding my business, having a drink (I'm so cheap I brought it from my room in a plastic cup) with some nice people in some terrible Mexican restaurant, when a colleague of mine joins us and says to me:
"Elizabeth, I like you. I am your friend. But I want to tell you what other people are saying about you. You are being blacklisted by other scholastic coaches for your overly aggressive recruitment practices." He goes on to accuse me of a) trying to get a kid who lives 2 hours away from my school to transfer there and b) that some of the kids in my school live outside the district.
I don't even know where to start. First of all, there is nothing unethical about recruiting kids, as far as I can see. But it's totally false--I have never spoken to this child or his parents about attending my school, because he lives two hours away in an area with excellent public schools. I mean, if I were a mother living in a nice area, I wouldn't make my kid commute two hours each way every day to attend a title 1 public school in a (frankly) dangerous area, even if Kasparov taught there.
So I laughed and asked my accusatory colleague to please ask the child's father whether I had ever spoken to him. At the end of the weekend, my colleague said he had not had time to ask.
But he did later request that the Scholastic Council investigate where my students live. Now I have no idea where my students live, since I don't follow them home. ButI'm pretty sure you have to present a gas bill or a lease or something that is not so easy to fake when you do register a child for school. maybe some parents out there would know?
I was rooming with Greg, who of course found it hilarious that I was being "blacklisted" (there is absolutely nothing in the scholastic community that anyone could blacklist anyone from, as far as I can tell) and promptly began blacklisting me from all kinds of things: choosing the movie, using the shower, getting to eat the ice cream.
But really, what is wrong with these people? I would understand if I gave private lessons or ran for-profit school programs and was somehow a threat to their income. but I don't and I'm not. I'm a public school teacher who has nothing to do with their world, other than my students occasionally play theirs. of course maybe it's my creepy lazy eye....
Posted by Elizabeth Vicary at 5:54 PM

I loved the video, and the story sounds like classic chess player insanity. I am impressed that you have the willpower to not laugh at a chess coach who informs you that there are powers attempting to blacklist you.

Anyways, best of luck in defeating the conspiracy despite the life-changing handicap you recently discovered.

you dont have a lazy eye.

I totally laugh, and I don't believe you anymore, Greg

I think we shall have to punish your lazy, slothful eye with a time-out in the corner. And no dessert until it shapes up!

See you in Parsippany, btw! Or, well, maybe I'll see you, but you know, in view of your unruly visual organ there, I wonder about the other way around... hopefully your obedient other eye will notice me. :)

1. Agree with early poster that this sounds like a combination of jealousy, usual chess paranoia nuttiness and parent-kid-sport competitiveness.
2. If you are worried about a lazy eye, set up a video camera and film your face as you read and track - do a variety of activities -if you have a lazy eye it might notice the light flares are off.

Elizabeth, you do not have a lazy eye. I am absolutely positive you don't. Of course, next time I see you, I'm going to fixate on your eyes to make sure. So don't get weirded out when I stare. :)

@ "Sorry it's been so dead here recently. I've been spending a lot of the spare time with the new boyfriend."

That seems like a good priority. I'm having the same trouble with a writer for my magazine, and she's 75. So the voice of experience backs you up, Elizabeth.

Elizabeth, it's not your fault, but every urban public school that has anything good to offer has students enrolled from out of district -- the address given was a grandparent's home, or a public building, or simply out of date. It's a desperate urban parent survival strategy, and unfortunately, one can hardly blame them. You probably do have students enrolled from out of district, and if you care about them, you won't dig into it.

I once had a student whose official address, I discovered, was the University of Chicago. Let's just say she didn't seem like the advanced-degree-pursuing kind.

lizzie, i like you. i am your friend. but you have a restless leg.

I can assure you that you are not being blacklisted. You're being shunned. Hold your head high, smile at them, and greet them loudly. (It works for me!)

I can also state, without any seriousness whatsoever, that your eyes are windows into your lazy soul.

If your team happens to play mine at USATE, please note that you are hereby blacklisted from winning our match.

I do like the idea of a clinic that says 'go get this checked, right now', even if they prove to be off-point, because I'd rather have that than the clinic that says nothing when something palpable is wrong.

I never get why scholastic chess must be competitive in quite that way. Each school which competes can generate players who can beat 90x% of the players in their local area. Each of those kids, I theorize, learns a bit about discipline, planning and risk/reward assessment.

I love what is is you do, and what your team has accomplished, but I cannot, frankly, imagine that the prestige of playing at your school is really going to bring the ringers out in droves. I'd have to think any kid would choose to go to school in her own neighborhood, and play for that team, even if it does a bit less well than yours.

It's a bit like that line in Woody Allen's Manhattan about these are the things we do and worry about so that we don't have to worry about real things like death and the meaning of life.

But what an evocative phrase--you're 'blacklisted', and the fellow who comes to tell you is of course the one who tries to 'report' you.

Hurray for your large, nice eyes, and your great new boyfriend!

"you always wonder if something's wrong with you"

This cracked me up, just last week I asked a friend when she developed her twitch... to which she looked in horror and explained she didn't realise she had one,