After Amateur Team, I went to Tucson to see my friend Jean Hoffman. It was really lovely getting out of New York and being in the sunshine. It rained one day and everyone there apologized to me. haha

Jean runs a non-profit, 9 Queens, that brings chess to "under-served populations" (women and low income kids). That might sound like a slightly confused mission, but it works out nicely in practice. The great thing about Jean, especially about working with Jean, is that everything she does professionally is quality. you know what I mean?

if you don't, here's a glimpse: 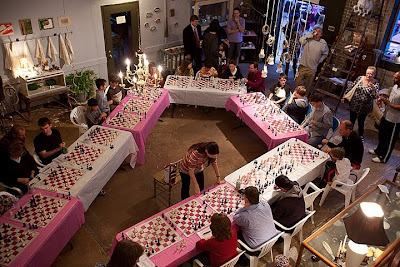 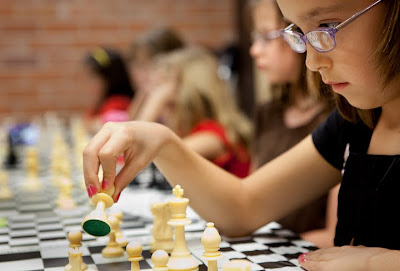 doesn't it look great? now that I think about it, I'm really lucky to work with so many competent people.

While I was in Arizona, I spent a day with Jean and chess instructor Andy Roth at an elementary school and gave a two hour workshop on teaching chess at a SACA (Southern Arizona Chess Association) tournament. I was super-flattered that they hosted me and that 22 adults came and listened to me for a couple hours. (my kids have to). My talk was mostly about the importance of a student-practice-centered curriculum, and how to use different chess puzzles and exercises to address specific learning problems. The text of the talk (I wrote it out, but then couldn't bring myself to actually read it) is here.

Jean and I made nice big binders for attendees, but for you here, a brief overview of the puzzles and what they are good for:

I love double whammys particularly because they directly teach the most effective thinking strategy for anyone rated 100-1200: "If I go there and then there, it's checkmate!" (almost no one under 1000 ever defends anything)

White makes two consecutive moves. The first move cannot be check. The second move must be checkmate. I include four problems here, because I adore series of similar puzzles: I don't have to look like a fool scrambling to set up a new position, plus it demonstrates for kids that details are important in chess: small changes make big differences and they need to be careful. 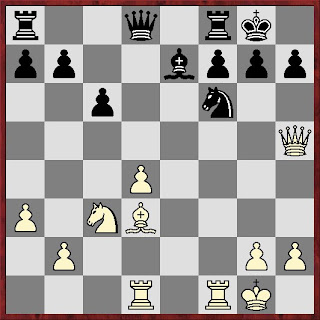 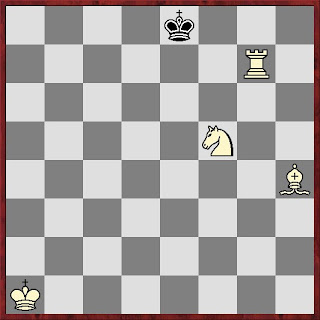 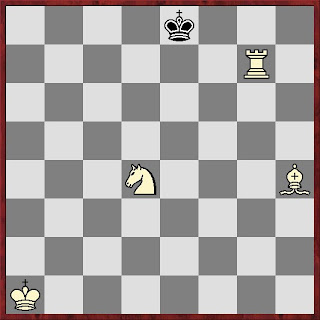 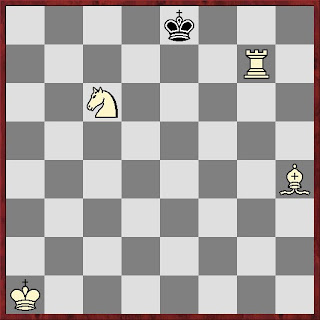 triple lloyds These are great for reinforcing checkmate and stalemate, and teaching mating patterns. I love that they ask students to find checkmate by thinking about what squares are controlled by white pieces, rather than by a trial and error search of checks.
Each triple lloyd asks three questions: where could the black king be so the position is
a) checkmate
b) stalemate
c) mate in 1.
I created the diagrams in chessbase, so I could not make a position without a king, although triple lloyds do not have the black ones. Please ignore the black king in the diagram. 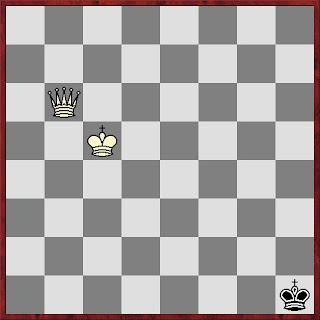 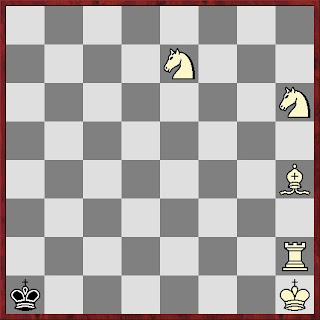 Who's the goof? These are great for getting kids to think broadly about chess and its possibilities and to troubleshoot for rules violations. For each position, you have to say why it is illegal. 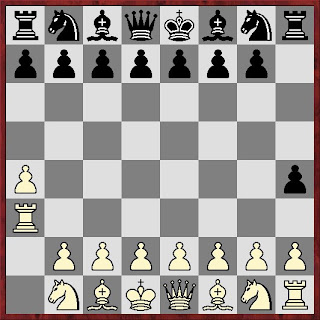 The white king and queen are misplaced. 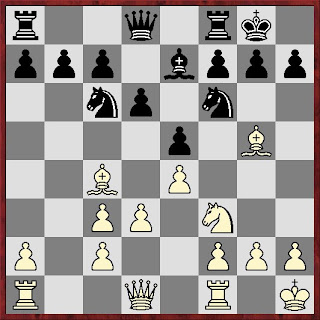 Series of similar mate-in-ones. These are stolen from an out-of-print Coakley mate in one booklet. Jeff was kind enough to send me a copy, and I fell so in love with it that I ordered 10 copies and gave them out as Christmas presents one year to my favorite Chess in the Schools instructors. They save me set-up time at the demo board and they make kids be careful and look at the details in a position. I often use them in my third checkmate lesson, "When you solve a checkmate, you can play." The basic idea is that a kid gets to move from the learning group to the playing area as soon as (s)he solves a checkmate. I start with harder checkmates and move to easier ones. This means that the kids who already understand have more playing time and the kids who are confused get more direct instruction. And that I know who is who. 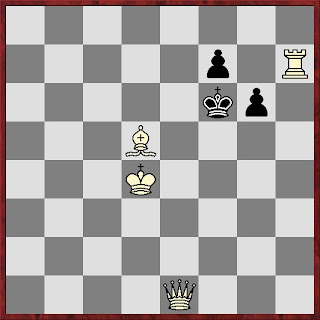 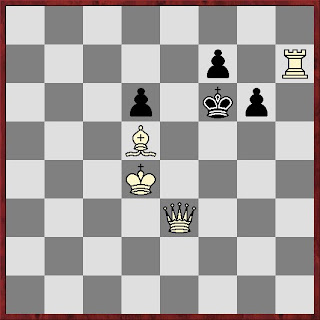 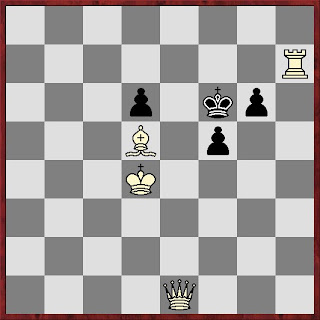 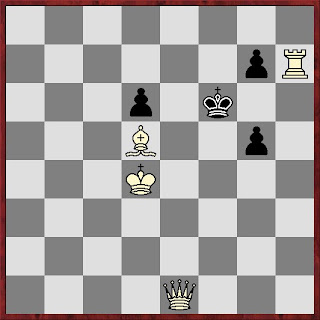 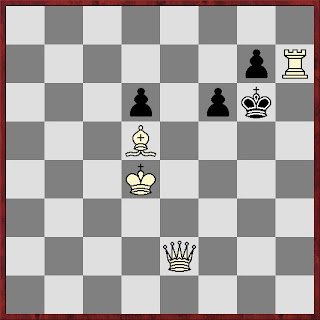 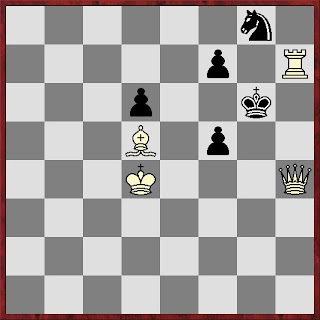 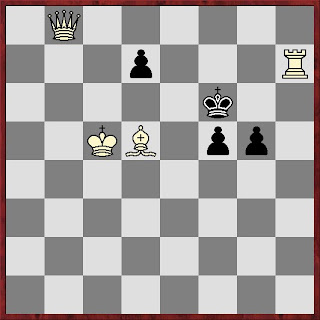 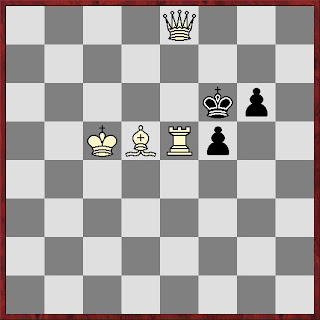 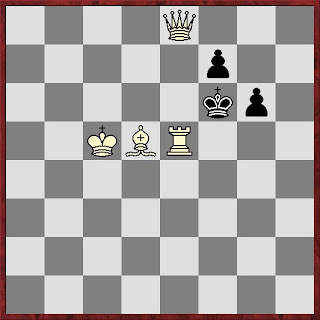 The other thing that I talked about that I think is super-useful is teaching kids to solve double attack problems methodically, by first identifying enemy pieces that are either not defended or not well-defended**. A piece that is not well-defended is defended only as many times as it is attacked (so if it's attacked again, it's in take). This gives kids a short-list of targets (to which is added the king, of course), and then it's just a connect-the-dots puzzle. For example, in the following position: 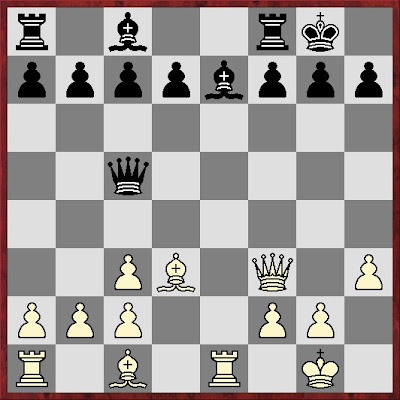 The rook on a8 is not defended; the bishop on e7 and the pawn on h7 are not well defended. (attacked once, defended once). White wins with Qe4.
some pictures: 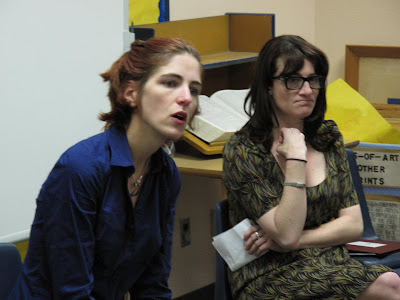 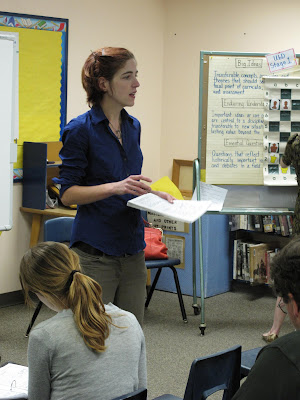 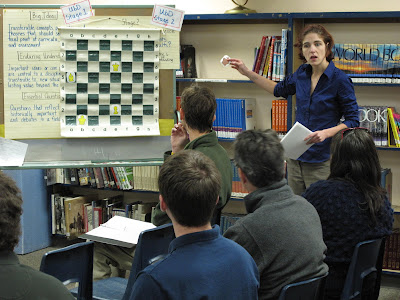 *in fact, all of the puzzles are from Jeff's books. If you teach chess and you don't own them all, you're ridiculous and should order them immediately. Later, you will love me for this.

** I stole this idea from Miron Sher

Posted by Elizabeth Vicary at 11:58 AM

your explanation of how to teach is as methodical as sher's techniques. that's high praise for a girl with short hair.

Lots of great ideas here. A class of 90 kids - all different levels: Wow! Thanks for sharing!

Elizabeth, can you reveal what the title of Jeff Coakley's new book will be?

Liz, thanks for helping out our Arizona children, you are a great student chess teacher! Jenn Shahade has also visited the 9 Queens and helped a lot. I hope you enjoyed the warmer weather in Arizona for a few days.

The position after "The white king and queen are misplaced." is hysterical!

Thanks for coming to Tucson. It was great seeing you and I really enjoyed your lecture!