I lose horribly and have already checked out of my room

Amateur Team East, Sunday morning, 9 am, round five, Philip Shin, a 1700 kid, a ruy lopez, the worral attack (5. Qe2). He played something like a marshall, and I took the pawn when I wasn't supposed to. Already it's annoying: 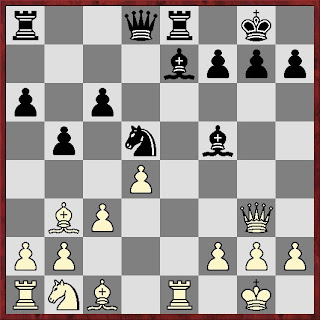 So I play 16. Bh6, my opponent makes one move, and I resigned. The worst thing is to lose quickly when you've already checked out.

Posted by Elizabeth Vicary at 10:48 AM

A few returns to hide my answer in case it's right:

It took me a long time to visualize that the Bh6 could not retreat to e3 after ...Bg5, Rxe8 Qxe8

You played an insipid line as white, got less than nothing from the opening, and lost quickly. Nothing unusual.

The important lesson you should take from this is to play main lines and know them so you can punish your opponent's deviancy! The main line closed Ruy Lopez is the only way for white to get anything whatsoever but you inflict oceans of suffering upon black if you go right down the main lines. Of course against the Marshall, play anti-Marshall or take it and go into the pawn up ending in the d3 and qd3 where black has to play accurately to draw.

:-)
Anonymous is just sore because he tied with Vallejo Pons for last place.

I, too, had the first reaction of ...Bh4, and spent a couple minutes trying to figure out why ...Bg5 could possibly be better!

On the other hand, I had not already checked out of my room...

I had the opposite problem. I lost slowly and had to get somebody to clear all my remaining stuff out of my room for me. Checking out early seems to be sure fire way to have one's game end early.

I hate the last day of that tournament, mostly because I don't want it to end :(

The worse problem is no nap between rounds. We solved that by getting a giant margarita at the mexican restaurant down the street for lunch. Of course, my final round, post-tequila, game is the one Jim West posts on his blog :)

Those moves you suddenly 'find' in the last minute when you are already pondering back and forth between some candidate-moves always turn out to be bad ones....

Kotov puts that nicely in his 'Think like a GM'

Rick:
Not enough returns -- your answer was visible anyway.

Since I started thinking of chess tournaments as vacation instead of as serious chess, I solved all these last-round room issues: I just pay for an extra night at the hotel. Sometimes I even sleep over, traveling the next day and taking a personal day at work.

Having a nice experience is more important than money. Within reason, of course.

"Not enough returns -- your answer was visible anyway."

Ah, sorry about that. Well, you would have gotten it in a few seconds anyway. If I got it it couldn't have been that hard.