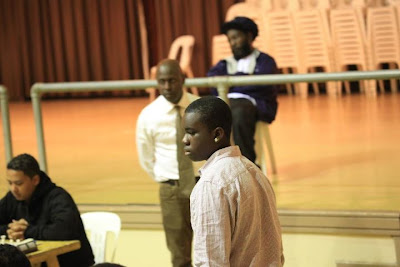 Justus Williams is an enormous champion of chess.  He recently tied for first (5.5/6) at the Barber Tournament of Junior High State Champions (to qualify he actually won the NY State High School Championship, but is officially too young to play in the Denker, so he had to "settle" for the Barber).

He then spent a couple weeks in South Africa to teaching chess with David MacEnulty and Jonathan Corbblah (photo stolen from DMac's facebook).

Finally, he beats NM Adithya Balasubramanian (2292) in the first match of the US Chess League pretty easily, playing 1. e4 for one of his first times. I'm impressed that he's unafraid to play complicated new openings, and I'm so excited he will play 1. e4 some of the time -- I think it will suit his crazygeniuskiller(material??sowhat?) style beautifully.

Posted by Elizabeth Vicary at 5:41 AM

Whenever I see one of Justus' games I can't believe he's still in middle school.

I agree. He is very good.