Ten Questions With FM Andrei Zaremba of the Dallas Destiny 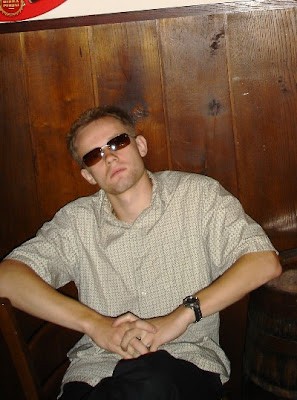 1. I understand from the League Commissioner that many girls come around during your matches and distract you. I can’t say I’m surprised, but how do you deal with that? Is it only you, or is this a problem for the entire Dallas team?
this is a huge problem, nobody can focus. People just come and want to hang out like a social event. I get particularly distracted, but I found a genius solution: bring headphones and listen to music, I credit this technique to my last round win.
2. While you scored 3/4 last year, I notice you are 0/2 this year. Does it make you sad to have a worse record than Todd Andrews? Any words for him? (editor's note: this interview was done before Zaremba's sensational defeat of NM Jerry Wheeler)
It makes me very sad that one Todd Andrews has a higher winning percentage than me, we were competing as young kids, and to this day the competitive fire has not died out. I predict a strong comeback by me however in thesecond part of the season and playoffs.
3. Describe your preparations for USCL games, including, but not limited to: opening preparation, pre-game superstitions, and interactions with teammates.
no preparation takes place

4. Who are your favorite and least favorite USCL opponents and why? (You may answer individuals and/or teams)

Favorite opponents: Tennessee, least favorite Seattle because I always lose
5. If you could choose the next USCL expansion team, which city would you choose, which players would you draft, and why?

Detroit or Chicago need a team!! Midwest is not represented
6. How obsessed are you with chess? In an average week, how much do you study, play and think about chess? If you could choose to be more or less obsessed, would you choose either and to what extent?
not very obsessed. I spend many 2-3 hours on a average week. I would bemore involved with chess: playing, studying, etc. if I had more time.
7. If someone were to post on internet newsgroups as “The Fake You,” what kinds of things would they write to discredit you?

Andrei doesn't know openings past move 4
8. How long have you been in Dallas and, cmon, why so long?
7 years, and damn I gotta get out of here, the sooner the better. I guess the chess team is the only thing that keeps me around. Still gotta move somewhere fun. Any ideas?
9. How did you spend your last summer vacation?
I went to Europe to play in a few chess tournaments, it was pretty fun, but a little too long, I got a homesick pretty quickly.

10. What do you think of your chances against USCL Commissioner Greg Shahade in your fantasy basketball league?

First let me say that it's a true honor to play with such a fine gentleman such as Greg. Not only is he a fine fellow, but he's also one of the greatest fantasy basketball minds I've ever met. I've learned the hard way never to make a trade with him, it's as if he knows exactly how every player will do in ever game. It's really quite incredible! He will win for sure.

(Note that it's "possible" that this question was asked and answered by USCL Commissioner Greg Shahade himself because Andrei was only able to muster the energy to answer 9 questions instead of the required 10! However Mr. Shahade is quite certain that these words reflect Andrei's true thoughts. Beware, if you try to skimp and answer only 8 or 9 questions, this may happen to you too!)

Posted by Elizabeth Vicary at 7:10 AM