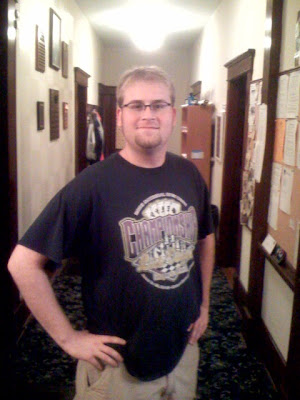 1. Thanks for doing the interview Toddie!
.
Before I answer any of your questions Elizabeth…there are a couple of things I would like to address. First off, comparing my League results to Andrei’s is completely ludicrous. Has Andrei played board two this season? I am pretty sure he is a board three player – which means that he is not really even in the same league as me. The fact that I have scored better than him on a higher board should shut him up for a while. Also, an important lesson can be learned from my League game against Koo-JA from the Destiny-Tempo match this week. The ole’ retained image concept got the best of me. I remember reading about this mental breakdown in Krogius’ book on chess psychology. I simply thought my Queen was still on e4 making my “??” rook sack possible. Mistakes like this are far more common in USCL time scrambles. Koo-JA fought well though…comparing my results to his makes a lot more sense. So until Drei-day gets out of the Busch league, there really is no need for this type of discussion.
2. OK! Congratulations on your clutch victory against Marcel. Can you tell us a little about the game? About your long-standing rivalry with Miami?

I guess I have to echo Marcel from last year. There is no rivalry until he beats me. It's one-sided.

3. The other key victory in your draw against Miami came from Louisianan John Bick. Was there any special reason he was visiting?

Unless you count playing for the Tempo as a special reason…John stayed with me for two weeks and we traveled to two weekend swiss events (one in Memphis and one in Huntsville) in between the Tempo matches.

4. You are facing Carolina next week. Any predictions ?

Week 10 will be an alternate jamboree in the Carolina-Tempo “For-the-Love” match.

5. Any big plans for the Tempo next year? Have you thought about trying to recruit Goldin or Kaidanov to play?

We can’t afford Kaidanov right now, but I did speak to him about it. Really we just need a sacrificial lamb on board one to be good. That would move everyone else down one and we would be a far more competitive team than we already are.

6. If you could choose the next USCL expansion team, which city would you choose, which players would you draft, and why?

Atlanta should have a team. The South is not fully represented. There are plenty of strong masters there too.

7. How’s life treating you these days? Does running the Nashville Chess Center take all your time? Are you playing a lot of tournaments? Giving many private lessons outside of the center? Cooking a lot?

After culinary school, I cooked for a couple of years and grew to dislike the drama that comes with working in a busy kitchen. I am happy that I got this education though, now I can cook for my family and friends (and myself, of course) and it is very rewarding. Then the opportunity arose for me to take over the adult operations at the NCC. So I quit cooking and focused on the club and my lessons. I now have a pretty full schedule with multiple lessons and four different after school programs during the weekdays. The club has been a big success as well. Membership is way up and our events are bigger than ever in Music City.

I have been fairly active this year playing in the US Masters in NC, Foxwoods and the World Open. Of course, I participate in numerous southern weekend Swiss events every chance I get. My busy tournament schedule this year is probably the reason for my USCL success. It has sharpened me up and hopefully it will carry over into this IM-norm Invitational I am competing in up in Chicago next week.

Besides all the chess, living in Nashville is extremely entertaining and comfortable. Despite our amphitheatre closing, concerts are still plentiful in town. As I write this, I am still sore from all the dancin’ and drinkin’ we did at the recent Widespread Panic shows. I have a lot of good friends and people I can trust here. I do not plan on leaving anytime soon.

Why would anyone want to waste their time on chess politics? You either play or teach…if you can’t handle either of those…then I guess its time for politics.

Chesslab.com and chesslive.de are good for online databases. Then I like to read US Chess Online, because of the great articles by American chess journalism heroes such as the Shahades and Elizabeth Vicary. I like to read my own articles there too. I like The Week in Chess and Chessbase.com to keep up with International chess news…

10. If Bill Gates gave you $100,000 to organize a chess tournament
a) where would you hold it,
b) what format would you choose,
c) who would you invite, and
d) what, if any, special rules would you impose?

Since I have become one of the most active TDs in Tennessee in 2007, the scenario greatly interests me. It would definitely be in downtown Nashville…maybe at LP Field where the Titans play. I would make it a 14-Round classical, multi-time control 2200+ section.
One special format that goes along with the lines of involving physical bouts with chess games would be interesting to me as far as special rules go. Although I don’t like the format of the chess boxing that I have read. I believe that each match should be a two-point match. The first point is determined by the game of chess. Whoever wins the game of chess, then gets to take the advantage of taking the first blow in the physical bout to follow. The loser has to just sit there and take it.

Posted by Elizabeth Vicary at 5:34 PM

Now the censors have taken my retort to Andrei away? If you want to play the blindman, then go walk with the shepard...but Zaremba needs to know.

Todd is here in Chicago right now, playing in the 6th North American FIDE Invitational. Having drawn againt Ray Robson on Sunday, he has the distinction of being the only player so far not to lose to the 13-year-old FM, who at 3.5/4 is devouring the field.

But there are five more rounds to go in the round robin, and Ray still has to face IM David Vigorito, with whom he currently shares the tournament lead, and Illinois state champ IM Angelo Young.

It's a lot more drama than we're used to here in the Midwest. I even forgot to milk the cows this morning, I was so excited.