Don't think I'm going to relate the two because I'm not.

The problem I have with democracy as a system of government is that I have no idea what skill set makes for a good president. Maybe being an enormous policy wonk is by far the most important requirement; maybe's it's being good with people; maybe it's being a hard worker; maybe it's charisma; maybe it's about being able to amass power; maybe it's having had broad life experiences or a plethora of international diplomacy experience. How am I supposed to know??? And if I don't know, isn't voting just an exercise in absurdity?
While I'm going to vote for Obama, I have a sneaking suspicion that Ms. Clinton has exactly the right sort of personality to make an effective president.
subject change

So it looks like the team competition in the upcoming National Junior High is going to be insanely strong.
The K-9 open will have:
1. a team from Washington State with Michael Lee (2277), a 1991, a 1792 and a 1450,
2. half a Hunter team (probably a four 16-1800s) and
3. (rumor has it) Dalton with Parker Zhao (2225), Kassa Korley (2113) and who knows who else.
The K-8 open will have
1. the stronger half of the Hunter team with Alec Getz (2229), Aaron Landesman (1997) and at least a few 15-1600s,
2. Canyon Vista from Texas, with 8 1800s.
3. IS 318: 2 1900s and 7 more 16-1700s.
I've been going since 2000, and I can't remember a year that was half this strong or interesting. My school has won three of the last four years, and while the kids this year are easiest the best team I've ever coached, it seems we are very serious underdogs. Luckily I am also rooting for Mike Feinstein's students at Canyon Vista, and this raises my overall odds of being at least partially pleased with whatever outcome.
Mike was my very first chess coach, for 3 months when I was 11, until he moved to another state and became a lawyer. I have this vivid memory of sheets of yellow legal paper he would give me with chess advice like "5 things to do when down ....a pawn .... an exchange ... a piece." I read them over and over and over again for years. He's now moved to Texas and is back to teaching chess part time. It's strange to see him because he's really the only person I know who knew me when I was a kid. 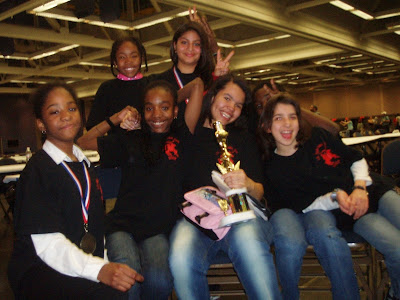 Posted by Elizabeth Vicary at 10:41 PM

This comment has nothing to do with the ubject blog entry, but Lizzy is finally famous. Take note of http://raychess.blogspot.com/2008/03/heres-to-women.html
for a very cool slideshow.

What skill set makes a good president? That is a question worth pondering, but I don't think makes voting an absurd exercise. Do the best you can with your power to vote, and be grateful that you have a voice in selecting your political leaders, while many others around the world live in tyranny.

CASSINI SPACECRAFT TO DIVE INTO WATER PLUME OF SATURN MOON

PASADENA, Calif. - NASA's Cassini spacecraft will make an unprecedented "in your face" flyby of Saturn's moon Enceladus on Wed., March 12.

two recent pieces on voting and democracy..."Free your mind"

excerpt1:
"Here's the problem for democratic theory: If most people hold these demonstrably incorrect views, how can they be qualified to elect a president? They have no way to sort destructive or impossible promises from reasonable ones.
As long as presidents have the power to meddle in the economy (which means meddle with us) and are expected to do so, voters ignorant of economics are unlikely to make good decisions. Incompetent voters assure incompetent candidates and officer holders."