Do you know this beautiful, brilliant album, or should I say 3 volume concept album, by the magnetic fields? from wikipedia:

The album was originally conceived as a grandiose musical revue. Stephin Merritt was sitting in a gay piano bar in Manhattan, listening to the pianist's interpretations of Stephen Sondheim songs, when he decided he ought to get into theatre music because he felt he had an aptitude for it. "I decided I'd write one hundred love songs as a way of introducing myself to the world. Then I realized how long that would be. So I settled on sixty-nine. I'd have a theatrical revue with four drag queens. And whoever the audience liked best at the end of the night would get paid."

I was going to work this morning and "trying on" this song-- do you know what I mean, you listen to the song and see if you can pretend to be one of the characters? I do the overwhelming majority of my "trying on" during my morning walk to work. So today I was trying on the magnetic fields song 'absolutely cuckoo':

Don't fall in love with me yet
We only recently met
True I'm in love with you but
you might decide I'm a nut
Give me a week or two to
go absolutely cuckoo
then, when you see your error,
then, you can flee in terror
like everybody else does
I only tell you this cause
I'm easy to get rid of
But not if you fall in love
Know now that I'm on the make
and if you make a mistake
my heart will certainly break
I'll have to jump in a lake
and all my friends will blame you
There's no telling what they'll do
It's only fair to tell you
I'm absolutely cuckoo

and I was thinking, pretty much. I felt happy this morning, which surprised me, because I've been pretty down for the last couple weeks, really for the last year or so. enough at least so that I thought "huh. I feel happy and relaxed. that's weird." And then I thought "people look at me and think I'm dynamic and interesting, but really I'm just animated by near-constant anxiety."

There are two kinds of people:
a) my love and I
b) other

All people fall into two camps
that ever twain shall be:
those lost in darkness without lamps,
and then,
my love and me...

maybe it's better when you hear it, but i like it at least.
And then I got to work and looked at kids' games all day. Overall, I thought the beginners had come a long way. 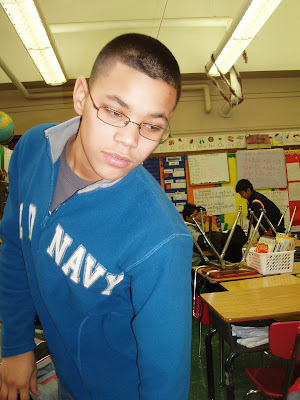 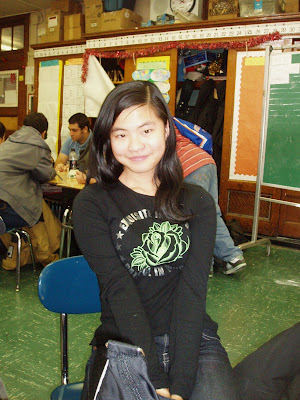 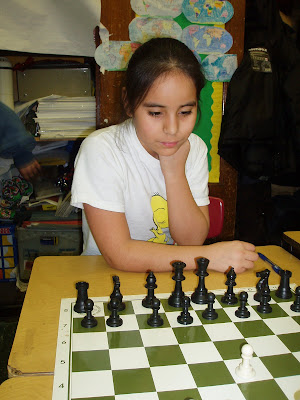 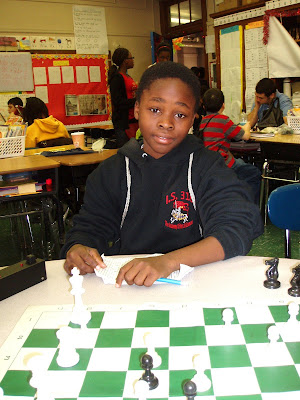 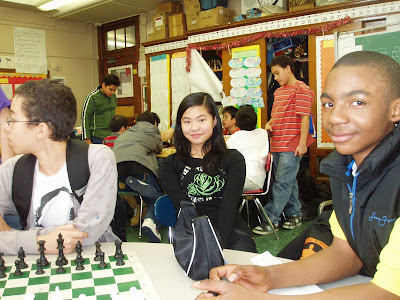 carlos, jie-jing (notice that she hasn't moved in any way since the first photo), azeez 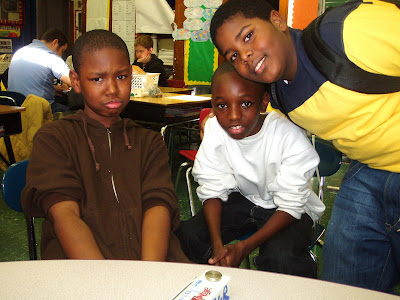 Then I heard this news about some of the family stuff one of my kids is dealing with, and I thought, wow, I need to stop feeling sorry for myself right away. I do not have any problems at all.

Although I will mention that I'm now single, just in time for valentines day, and so if you've been waiting for just the right time to send me boxes of chocolates or anonymously ask me out, wait no longer.

Posted by Elizabeth Vicary at 6:07 PM

Many people who are considered very successful by conventional standards will express fears of anxiety or being unable to live up to expectation. This "looking over one's shoulder" feeling is actually common - don't what that says about our society or whether it is just a natural feeling. I suppose it is better than feeling overconfident or cocky.

Lol look out for the vast massess of American chess players to dig in their pockets :P.

I read your phrase "I'm just animated by near-constant anxiety" and I immediately thought of a close relative who was going through something similar. Her doc gave her medication, which they had to tweak but turned out to be 100% effective. On the basis of her experience let me suggest you talk to your GP about it. Good luck and God bless you, honey.

isn't a constant state of near anxiety the norm for new yorkers?

maybe I should change it to chocolates or valium?

"Sweet-Lovin' Man" is just about the greatest song ever written, and "Washington, DC" is not far behind.

so you broke up with Shaba? that's great, you finally realized that you are in a league that he should only be able to dream about. hot girls shouldn't date ugly dudes.

hi Lizzy - I read your "...Top 10 Teaching Books" and want to thank you for it, and all of the wonderful time you dedicated to coaching kids and disseminating information. I'm writing because I want to purchase a book for a friend's 8 year old son (who reads at a relatively high level), and has recently taken an interest in chess, but knows little at this point (he's on the Left Coast, and I've only played with him a couple times.)
After reading your excellent article, I am a bit overwhelmed as to, if I could just pick one "learn-it-yourself" book, well, if you could possibly help me, I'd appreciate it enormously.
thanks!

Winning Chess Strategy for Kids by Jeff Coakley. No other chess book for children is even remotely close to as good. The 8 year old will be able to read most of it by himself, plus it's got cartoons and is extremely fun.

69 Love Songs is an awesome album, one of my favorites, unfortunately marred by some atrocious singing on a few songs.

other good songs:
"warning sign" by coldplay
"heaven forbid" by the fray
linger, dreams, ode to my family by the cranberries are also great.
:)

Well, for my part, I'll cling to my illusions and continue to regard you as dynamic and interesting. :) Might see you at the World O... not sure yet. Man, that thing is still expensive, even though Mr. Goichberg is dropping the price a bit this year.

I'd ask you out, but I'm sort of in another state. However, if you can help me land a teaching job in New York, preferably one that won't make me suicidal, then maybe we can get something going.

I warn you, my chess is terrible. Is that a deal-breaker?

i can't deal with someone out of state though. i've had too many long distance relationships and i want to be happy now.

Wow, her chess IS bad.

i've played much worse games than that.

--Shereshevsky, All I Really Needed to Know about Relationships I Learned from Endgame Strategy

Chocolates & valium are covered in the chapter on the principle of two weaknesses.

Maybe looking outside of the chess community for your next relationship. There are a lot of writers in Brooklyn. Though I have to say that Yury Shulman looks really cute in jeans and a t-shirt.

I had all three of those thoughts myself, also.

You are skipping ahead to the "Problem of Exchanging."

When one has a long-lasting positional advantage, forcing play is premature.

You can't go wrong with a Magnetic Fields post, whatever its source, or with the ability to realize that one's own problems are not problems in the sense a lot of folks face problems these days.

I listen to mostly instrumental music these days, but I always like Steve Wynn's Dream Syndicate lyric (to the best Lou Reed song that Lou Reed never wrote or sang):

"I thought I knew the answer--but no question was posed".

Near-constant anxiety has its uses, too-and what matters is what you make of it, I believe.

OK, how's
this?
He's from NY, turns 33 on Valentine's Day & lists his turn-ons as: Likes a challenge & a "kick ass" sense of humor. Even if you're gun shy of popcorn & breakfast in bed on the third date, at least he can cook & has a job.
He's on the food channel; maybe it's time for a chess channel.
-Cupid