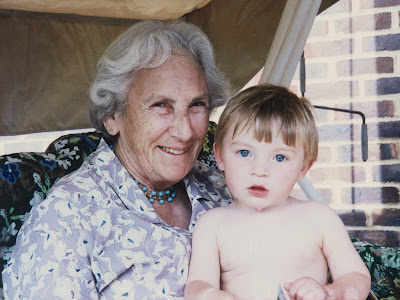 my late grandmother with my half brother Adam. (he is now 14).
more hilarious photos of granny in 1934 lawn ballet are at bottom!!

Is anybody else interested in autism? I have a half brother who is quite severely autistic, so I have some personal interest. Plus I suspect there is some connection between autism and chess: the lack of interest in people, the fondness for repetition, the dislike of over-stimulation.

I was struck by this recent NY Times article:

Their idea is, in broad outline, straightforward. Dr. Crespi and Dr. Badcock propose that an evolutionary tug of war between genes from the father’s sperm and the mother’s egg can, in effect, tip brain development in one of two ways. A strong bias toward the father pushes a developing brain along the autistic spectrum, toward a fascination with objects, patterns, mechanical systems, at the expense of social development. A bias toward the mother moves the growing brain along what the researchers call the psychotic spectrum, toward hypersensitivity to mood, their own and others’. This, according to the theory, increases a child’s risk of developing schizophrenia later on, as well as mood problems like bipolar disorder and depression.
In short: autism and schizophrenia represent opposite ends of a spectrum that includes most, if not all, psychiatric and developmental brain disorders. The theory has no use for psychiatry’s many separate categories for disorders, and it would give genetic findings an entirely new dimension.
Hilarious 1934 Lawn Ballet Featuring My Grandmother 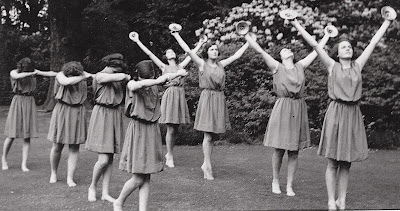 sorry, I don't know which one she is. 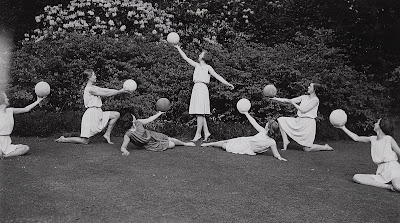 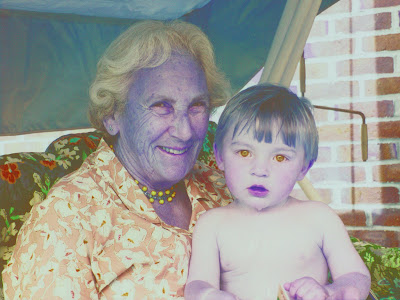 Look what Blogger did to my photo the first time I tried to upload it. weird, right?

Oh, I forgot to mention, here is a picture of my hand.

Posted by Elizabeth Vicary at 2:15 PM

I don't know how actively interested in it I would say I am, but there are quite a few very strong HFA (or I guess I should say likely HFA) chess players. I've heard that it's actually surprisingly common.

Can't someone be social, even extremely gregarious, without being schizophrenic or bipolar? This theory sounds ridiculous to me.

I've heard that Bill Gates may have Asperger's Syndrome, which occupies " the higher functioning end of the autism spectrum"

characteristics of Asperger's include:

When I saw the movies Rain Man, and A Beautiful Mind, plus some others I can't remember the name of, I was struck and also horrified that many of their behaviors did not seem that weird to me --extreme yes, but I could relate to them.

As a high school teacher, anti-violence program teacher and chess club parent/moderator, I have worked with kids diagnosed with Asberger's Syndrome. All were highly intellegent intellectually, but lacking in appropriate social skills to varying degrees.

One of the kids was in chess club. He was always moving around, verbally inappropriate (timing, not content) and in need of constant supervision. BUT, once you got him sat down at a chess board and past the third move, he became focused and played chess quite well. He even won his first scholastic event.

I'd love to know how his brain functioned.

I first learned about the latter from a book by Dr. Oliver Sacks titled "An Anthropologist on Mars."

My other favorite books about the brain are

"How the Mind Works," by Steven Pinker

"Phantoms in the Brain," by Ramachandran and Blakeslee.

Re: chess hands
Once, a friend of mine, an adult chess novice, wanted to take lessons from me. So the first time we sat down at the board, the first thing he wanted to know was, how to capture a piece like an experienced player. He didn't mean the move, he meant the movement: he wanted to be able to manipulate the pieces quickly, snappily, with flare, like tournament players do.

From the way you hold the piece in that picture I bet you would be a good Go player.

I think that Bobby suffered from Asperger's Syndrome, which shares some of the same symptoms as autism.
--an exclusive focus on one specific area
--sensitivity to noise and light
--difficulties in personal relationships
--awkward gait

Yes, id agree with you !
By the way: Stumbled on your blog by accident and been reading it for a couple of hours?!? serious !
well done, and keep the good work !
Ras B