I can't wait for the Bobby Fischer Symposium! 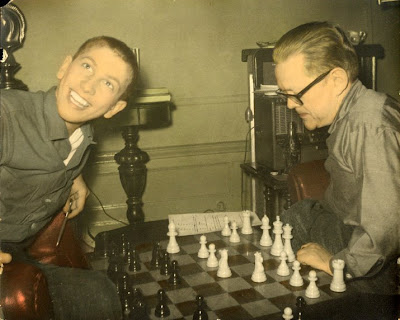 It's being held at the Marshall Chess Club March 6 and 7. Nice to see the good Dr. Frank Brady bringing some culture to chess. A symposium! how civilized!
I'm going to go dressed as Bobby Fischer.
Here's the sentence from the flyer that grabbed me:
Two philosophers, a Grandmaster, a biographer, and a player who once beat Fischer, will be among many of those who will present papers, or share reminiscences of Fischer, possibly the greatest chess player who ever lived.
And what I like even more is that the sentence is hilarious whether or not you realize who the person in question is (anyone from New York will recognize that particular claim immediately). Because it's pretty obvious what the guy who once beat Fischer is going to reminisce about, right?
Posted by Elizabeth Vicary at 5:44 PM

In your opinion, in which section should a 1067 rated 5th grader play in order to have the best chance of winning a trophy at the SuperNationals.

What state are you from?

Glad to see the first commentator has the priorities straight. At the Super Nationals it is all about winning a trophy - forgotten playing well, meeting people, experiencing something neat; focus on winning a trophy.

relax, second commenter. first commenter
a) is looking out for his kid
b) did not put the competitive element in chess all by himself
c) was just looking for a piece of advice.

But it is also true that the best laid plans often backfire and also that a 5th grader playing in K-9 (rather than with his or her own peers in K-5 and K-6) may have a hard time against lower rated but more mature 7th, 8th and 9th graders.

I wish I could be there for the symposium.
I also wish that Frank Brady would update his great Fischer biography.
A symposium on Bobby is a fascinating prospect. Bobby possibly was afflicted with Asperger's Syndrome, and an exploration of this possibility might lead to a more sympatheic understanding of some of his behavior.
The roots of Bobby's anti-Semitism also deserve exploration, not as a way of excusing him, but as a means of better understanding him. Was it his contact with the guy who started the Log Cabin Chess Club that sowed the seed? Was it his anger at his real father? Was it his treatment at the hands of Reshevsky or the Piatigorkys? Reprehensible as this anti-Semitism was, it didn't pop up out of the blue...and there is plenty of evidence that it pre-dated Reyjkjavik '72 by years. To what extent was it exacerbated by his mental illness?
These are the kind of serious questions that merit some speculation. I hope that the symposium will be a serious attempt to place Fischer in his context, rather than the boiler-plate bash session.
One more question that I have always wondered about Bobby: he seems to have had no one who acted in the role of his trainer. But how did Bobby first come into contact with the Najdorf Sicilian (which he is playing in the beautiful picture you posted, of him with John Collins). Was it someone handing him a Russian chess magazine and saying, hey, check out this line of the Sicilian, or what was it?
At any rate, I hope the symposium will be put on DVD for purchase, or published as a book. Run correctly, it will be a great contribution to chess history.

Which Bobby are you going to go dressed as?

Anon#2 may be too cynical - the parent who wrote in may just wanted to be sure his/her kid was competitive and not way over his/her head - but that isn't the question - it was about winning a trophy.

playing well, meeting people, experiencing something neat can be had in any section, why not maximize your chances of winning a trophy as well??