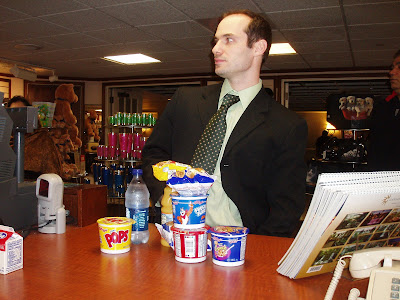 I would understand if you were starting to suspect that. it just seems like there is a very small chance that this process is a secret window into something else.
Supernationals. where to start?
ok, I love the hotel, have to completely disagree with you there, Ellen, sorry. here's why: even though I never left the hotel for four days, I still got exposed to natural light and the fresh breeze, was surrounded by green lush beautiful plants, oxygen rich air, and the burbling sound of the river and birds. so I really didn't feel my normal way: bitter, angry, and tired. I could not leave that hotel for weeks without going crazy. ( :)? )
although, the food sucked, I agree. I really wish there was just a pill you could take.
my favorite auditory moment was the beginning of each round of the blitz tournament. if you've never heard the sound of hundreds of Chronos being tapped near-simultaneously, it's very beautiful. like a thousand tiny water-pebbles clattering.
so Jacob played 1...a6, and while I agree this is not a normal puzzle answer, but my students are not performing monkeys, what can I do? you want a blog with better puzzles? try Susan Polgar's blog: she has a new series I am looking forward to, positional puzzles.
Jacob's game finished: 2. Bxc6 Qd3+ 3. Ke1 (3. Kg1 Qd1#) Rae8 4. Bxe8 Rxe8 5. Qe7 Rxe7#.
It's hard for me to really know how I felt about Nationals -- we took 58 kids, and so the games I saw are really just a small and probably unrepresentative fraction of the whole. (Greg Shahade and Alex Lenderman helped me, so they saw the better kids' games. Let me say they are wonderful, patient, hard-working, generous people and I am deeply grateful to both of them.) But in my analysis, I saw a lot of blundering, which depressed me.

There is a freelance filmmaker who works for MTV* who came with us to Nationals to make the trailer for a documentary about the chess team. I suspect I will seem like a real lunatic. Several times I would be answering a question on camera and my answer would start to go in some weird, very abstract direction and then I would lose track of the sense completely and just trail off and shrug apologetically. I think I find it hard to go back and forth between chess and talking.

One thing Katie, the filmmaker, commented on was that I don't do anything when the kids cry. I just ignore them and continue going over whatever game I'm going over**. I used to drop everything and run over to console the kid, but I stopped for a couple reasons. First of all, I can't and don't want to touch the kids, pretty much ever. Kids that age are super-sensitive, and they aren't really in a position to say to their classroom teacher "hey, I'd rather you take your hand off my shoulder," and so I realized it isn't fair. Also, one time I put my hand on a kid's arm and she visibly shuddered, and then I realized with horror that I had become the creepy teacher.

But also, I think it's nice in a way that I can have a relationship with the kids that's supportive and important to both of us, but not emotional, or about whether I like them or they like me, or how nice anyone is, just purely about how much they are thinking. I feel like pretty often in my life I've made the mistake of forcing relationships to be more emotional than they needed to be, and maybe I'm trying to model how not to do that.

It's strange now, I was only working and thinking about kids' chess and Nationals, but suddenly I'm on spring break for a week and then the summer stretches out ahead. I better find something to do.

*that's my way of trying to impress you

**although if they want to look at their game, they get to be next in line
Posted by Elizabeth Vicary at 4:42 PM

Sorry to hear that your teams did not finish on top, after doing so well in the Blitz.

"I really wish there was just a pill you could take."
There is, but I read somewhere that you eat only unprocessed foods.

"...sound of hundreds of Chronos being tapped near-simultaneously..."
A couple dozen sounds pretty good, so this must have been amazing.

"But in my analysis, I saw a lot of blundering, which depressed me."
You're always going to see blundering unless you're analyzing top GM games (even then...), but in any event, getting depressed over it is an emotional response that you can probably redirect constructively.

"I think I find it hard to go back and forth between chess and talking."
Frank Zappa once said: "Talking about music is like dancing about architecture."
Maybe talking about chess is like swimming about differential equations.

"...and then I realized with horror that I had become the creepy teacher."
Have no fear, EVERYTHING's creepy now.

"I feel like pretty often in my life I've made the mistake of forcing relationships to be more emotional than they needed to be, and maybe I'm trying to model how not to do that."
That's actually a significant insight.

"I better find something to do."
Well, you might consider playing a few more tournaments... or possibly writing a book.

"sorry, somehow I forgot to take photos...."
OK, I know you were busy, & while not unforgivable, you may have to assume the position on this one. A trip to Nashville, TN, 5200+ players (including 58 of your own) scrambling around for four days competing in the biggest national scholastic event of the year plus an astronaut, Garry Kasparov, both Greg & Jenn Shahade & you FORGOT to take photos!? Obviously it's time to hire a film crew to document your activities full time. The funding could come from the royalties generated by your upcoming reality TV series: "Livin' Life Like Lizzy".

Were you by any chance at the Gaylord Opryland, a.k.a. the Bayoudome? I wrote my own account of staying at that hotel here. (Skip past the descriptions of convention sessions if you're not an English teacher.)

Far better than a picture is a quirky win from an odd opening resulting in a baffling middlegame.
Perhaps that's what would be fun to share.

I could loan you a few of my pictures. I think I took about 800 shots. That's what happens when you have the default setting on multiple shots.