they have cults too? 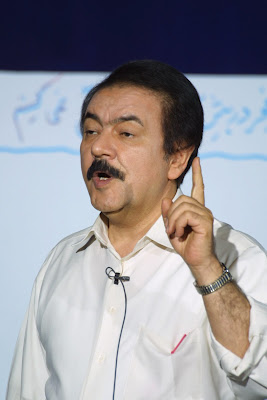 A while ago, I wrote that I was going to order a bunch of magazine subscriptions and the magazines would be like my new friends. I'm happy to say it's worked! I feel less lonely and I have more things to talk to people about.

Last night I was reading this unbelievable article about an Iranian expat cult. I had assumed messanic cults were somehow an American phenomonen.

“IT WAS one of the strangest places I’d ever seen,” says one of the few Farsi-speaking Westerners to have spent weeks in Camp Ashraf, 65km (40 miles) north-east of Baghdad, where some 3,400 Iranian dissidents are hunkered down and are now threatened with expulsion from Iraq, perhaps even back to Iran. It was “like a spiffy midsized town in Iran”, with parks, offices and buildings—but no children. It was “sterile, soulless and sad”. Nearly two decades ago, families living in the camp were “dissolved”, couples were forcibly divorced, and their children sent away, many of them to live with supporters living in the West, to be brought up in the faith of a movement widely described by independent observers as a cult.

For the past six years, the Americans have protected the camp, whose raison d’être is generally opposed by the surrounding Iraqi communities and by most Iranians, whether or not they are for or against the clerical regime in Tehran. But as American troops prepare to go home, the Iraqi government, which wants cosy ties with Iran, now says the camp must be closed and its inhabitants dispersed, probably back to Iran, where they would face an uncertain future, to put it mildly.
....

No less controversially, the PMOI is widely reviled by human-rights groups for nurturing a messianic cult of personality around Mr Rajavi and his wife, Maryam, and for enforcing a totalitarian discipline on its adherents. Several defectors testify, in the words of one of them, to a “constant bombardment of indoctrination” and a requirement to submit utterly and unquestioningly to the cause. No sources of news are allowed without the PMOI’s say-so. According to one defector, around 50 members who rebelled were sent to Saddam’s prison in Abu Ghraib, west of Baghdad.

Members are completely cut off from contact with their families. When the above-mentioned Farsi-speaking Westerner, who visited Ashraf in 2004, enabled wavering group members to talk to their families in Iran by satellite telephone, some of their parents refused to believe it was their children, for they had been told by the PMOI that they were dead. 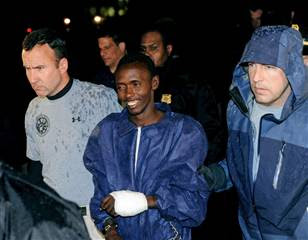 In other hilarious news, the smiling, happy 16 year old above is a Somali pirate, arriving in New York for trial. Arrrrr! Learn the language! (don't miss clips of pirate speak in Mandarin elsewhere on the site)

update: The NY Times has a funny headline today: When the City Held Pirates in High Regard

It has been many decades since a good pirate case has landed here, and for now, the laws and penalties are stacked to the skies against the defendant, Abduwali Abdukhadir Muse; gangster capitalism has its limits.
...
History shows that the city has long held pirates in high regard. Successful ones, that is. Under Col. Benjamin Fletcher, who became the British governor of New York in 1692, piracy was a leading economic development tool in the city’s competition with the ports of Boston and Philadelphia.
Posted by Elizabeth Vicary at 8:09 AM

Don't forget The Pirate Song, one of my all time favorites.

liz this 16 yr old would have killed a fellow american if given the chance!
why glamourize him ?
why care about his age?
millions of poor somalis
found a way NOT to be pirates
shouldnt you expect the same for the pirate who seems to think its all a joke,based on that smile.

oh no, not killing a fellow American? because that's worse than killing another person?

"Millions of Somalis found a way not to be pirates."

Right, most of them are living in abject poverty in a *much* more well-behaved manner.

I find this funny because the concept of pirates seems a) anachronistic and b) inherently funny, in the way that banana cream pies or sloths or unicycles are inherently funny.

In your attempt for a happier life, I'm interested to know if you have tried any physical activities such as maybe running, yoga or pilates? You are a chess player, a writer, a teacher and an ardent magazine subscriber...I wonder if maybe you could use a little more balance?

As always, love the blog!

john--you inspired me to finally buy dance dance revolution. i really wanted to for a while since it seemed like the only fun form of exercise. i'll let you know how it goes. thanks.

The pirate's smile is really interesting. He obviously doesn't know how to do an American-style perp walk.

I think his smile must be an African cultural way of saying, "I am terrified and unarmed. Please don't hurt me."

By the way, Liz, pirates are so not anachronistic. All through recent decades they have been disrupting sea trade and endangering the lives of ordinary men and women who make their living as merchant sailors (my old man was one of them). It's just recently that Somali pirates have stepped things up a notch.

You better put down that copy of The Economist and watch this training video:

Can't wait to see you in action!

While I'm not a big fan of rap (except for maybe Brad Bournival's chess raps) you certainly have a worthy contender, but
the pirate song I linked was nominated for a Grammy in the category of "Best G-Rated Pirate video Featuring A Girl With Pink Hair".