No, *I'm* the Rightful US Women's Champion 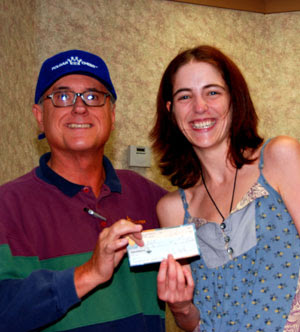 After reading the latest development in the continuing controversy surrounding the Krush - Zatonskih playoffs, I've decided to break my tactful silence and assert
my own glorious victory!!
I'm not going to bore you with my interpretation of the USCF Championship Guidelines.
Instead I appeal to your sense of fairness and truthiness.
After all, it's not what the rules say that matters.
It's what you know in your heart to be right.
Even though I didn't technically play in the tournament, my inner moral compass tells me I won. And what could be more American than that?
First of all, I wasn't even invited. What gives, Frank Berry? Why the conspiracy against me, USCF rating computer? I deserved to play. Just because the other women have won more games against higher rated people than me in the past, that doesn't mean they are better in some absolute, quantifiable sense.
Besides, I've been studying a lot in the last couple weeks.
Let's ask ourselves, who's really behind this? Who profited the most from my outrageous exclusion? Clearly, it's the other ten participants.
Irina, Anna, Chimi, Tsagaan, Katerina, Tatev, Esther, Iryna, Airplane, and Courtney: SHAME ON YOU, YOU DIRTY THIEVES.
I expect an apology letter from everyone by early next week.
Best wishes to all other chessplayers,
Elizabeth Vicary
Posted by Elizabeth Vicary at 3:16 PM

Elizabeth Vicary is the winner.

Can it be said that she participated in the championship tournament vicariously?

Works for me. Why should all the glory go to the stonger players, just because they win? Why does chess have to be so competitive? Let's have affirmative action for patzers.

While I'm on it, the rating system constitutes institutionalized age discrimination. Really. Since your playing ability declines as you get older, a rating system based strictly on the results of games is rigged against older people. Shouldn't everyone get, say, an additional 10 points for every year over 40, to level the playing field and show respect for elders?

(I forgot what I was going to say next.)

Oh, yeah, to keep whippersnappers in their place, any kid with a rating more than 100 times his or her age should be penalized.

And that picture, Elizabeth: Isn't it actually you getting the brilliancy prize at last year's women's championship? You played a great game, as I recall, but one of the reasons you got the prize is that you won the game. If you'd lost you would never have been considered. It always happens that way. Is that fair? Isn't it possible to lose a brilliancy?

This is an outrage. Such a conspiracy may soon rise up and bump Bears from the number one threat to America today!

I'd love to support you Elizabeth, but unfortuntaely I strongly believe that I am the US Women's Champion.

i don't get it. was the point of this to mock irina's whining or are trying to show sympathy for it? Or maybe it's something in between making a parody of the whole situation? explain pls!

Yes, Greg's the US women's champion!

Wow. Tom Panelas COMPLETELY missed the point of your post.

On second thought, could we make that 40 points for every year over 40?

I thought Tom was being ironic in all the posts, no?

Yeah, it's pretty clear that Tom was writing in the same vein as your post. :)

Anonymous 11:16 pm is the one who missed the point.

Yes, I was being ironic, though having to confirm it kind of sucks all the irony out of it.

Paradoxical, if not ironic, no?

See you in Philly... Looks like Chesslosers going to make it afterall! We'll all have agood time.

Let me know what you think of my shirts( and things) posted on my blog... its just in time for the summer chess season. So far, my WWMD ( what would Morphy Do?) is a popular item

I once met this dishwasher with chicken pox during a battle foretold in Rev 16:14–16. He looked like K.D. Lang with a bad spray tan and complained to me when good was about to defeat evil. I told him he had a slight superiority complex to think his voice could out weigh the wisdom of angels. But he kept shouting his idiotic words to the smiling amusement, of a victor of silence.

What a fun thread! What a great blog!

I realize I'm merely repeating what others have said here, but I'm caught up in the blogospheric bonhomie.

No irony in any of this; I mean it.

Speaking of the fairness ratings, this is the first time I've heard of this kind of event:

Oh, now I get it. Airplane: Airaptian. Duh.

Re: Dynamic Chess, I remember playing in a tournament, in SC about 15 years ago or more, that was formatted like that. My dad and I both played in it, he 2000+ and I 1200- at the time. It was a ton of fun and we ended up 1st/2nd due to my getting so much time advantage in some games and playing okay chess to boot. I remember my brother being there too now, and he was drawing all kinds of pictures, they were pretty good too.

Greg being the US Women's Champion is probably rigged based on him being a greedy young man whose sister works for the USCF.

And, check out my blog (inconsistently posting since 2003). And, the brand new ChessFlash.

I agree with Tom, 50 points added to your rating before being over 50!

Given the problematic nature of physical speed chess, I was wondering why tournament organizers don't just have players play blitz games on ICC (or some other online server)? It shouldn't be too hard to find two laptops, two mice, two ICC accounts and a wireless access point nowadays. I would presume any participant who had to have their tournament fate decided by a speed game would agree that this is one way to minimize any chance of unfair advantage for either player.

When I read it, I thought Hillary Clinton may have written the post. ;-)

I'm taking that as a compliment. :)
Elizabeth