would you describe yourself as "sensation-seeking"? 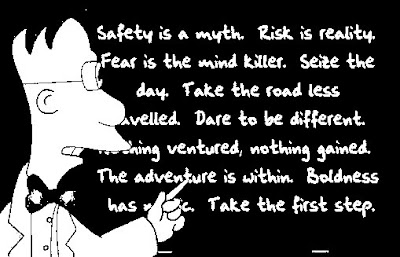 ...Zuckerman (1994) defines sensation seeking as “…a trait defined by the seeking of varied, novel, complex, and intense sensations and experiences and the willingness to take physical, social, legal, and financial risks for the sake of such experiences.” (p. 27). Because risky behavior is more likely to result in significant personal and/or social harm, it is understandable that much of the research on sensation seeking has focused on such risky activities. At the same time, it seems important to recognize that Zuckerman's definition does not imply that sensation seekers must take physical risks to meet their needs, only that they are willing to take such risks to meet their needs. Indeed, as Zuckerman (1994) notes, sensation seekers appear to be attracted to high-risk sports due to the sensations they provide, rather than their inherent risk. The primary importance of exciting sensations, rather than risk per se, suggests that sensation seeking might also be related to involvement in challenging and stimulating, yet less physically risky sports.

The present study tests this general hypothesis by examining the relationship between sensation seeking and involvement in chess. As Zuckerman (1983) has noted, any attempt to predict a link between sensation seeking and involvement in a particular sport must involve an analysis of the sport in question, in order to determine whether the sport possesses characteristics which would likely attract or repel sensation seekers. To that end, we briefly review the sensation seeking construct, and subsequently consider whether chess might have any appeal to the high sensation seeker.
Originally developed as an individual difference measure which might predict differential response to sensory deprivation (Zuckerman, 1979), the SSS evolved into a multi-dimensional measure, consisting of four interrelated subscales. The subscales, each comprised of 10 forced-choice items, include boredom susceptibility (BS; an aversion to repetitive and/or boring tasks and/or people), disinhibition (DIS; seeking release and/or disinhibited social behavior via alcohol, partying, sex etc.), experience seeking (ES; pursuit of an unconventional lifestyle via unplanned activities and/or hallucinatory drugs), and thrill and adventure seeking (TAS; seeking unusual sensations via exciting and risky sporting activities). A Total SSS score is also frequently employed in studies of sensation seeking. Of these scales, the DIS, TAS, and Total scales tend to show the highest internal reliability, factor replicability, and test–retest reliability, with ES to some degree, and BS to a greater degree, demonstrating somewhat lower replicabilities and reliabilities (Zuckerman, 1979).

On the surface, chess may not appear to be a sensation seekers' sport. The game requires a tremendous amount of concentration, frequently over extended periods of time. Moreover, during the course of a game, chess players are likely to remain relatively inactive as they consider their next move, or wait for their opponent to move, and neither player is likely to sustain any major injuries. Thus, the long and relatively inactive game of chess may potentially be aversive to those who (1) get bored easily, (2) would prefer to act in a disinhibited manner, and/or (3) enjoy thrilling activities like skydiving. (...)
read it all: Sensation seeking and involvement in chess
Posted by Elizabeth Vicary at 8:52 PM

I most definitely would not describe myself as "sensation-seeking" according to the study's definition, although I do score very high on the Big Five "openness to experience" scale. I think I do bore easily, but I'm absolutely not a thrill-seeker, I'm not much of an experience seeker, and I think my inhibitions serve a useful purpose and should be allowed to fulfill their responsibilities without interference.

Supposedly there are even genetic markers that coorelate with the trait.

I can imagine a chess program some day that offers an opening repertiore suited to one's DNA.

That will be the day.

Actually, I think an excellent chess book would be "Find the Openings That Suit Your Personality."