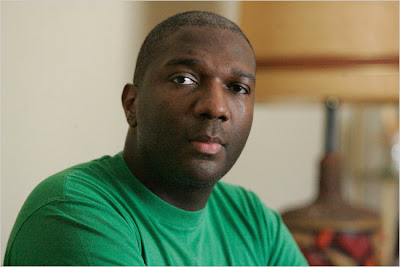 WASHINGTON — For a few hours this week, it looked as if South Carolina might ditch its never-fail reputation for political scandal in favor of a genuine history-making event.

There was Nikki Haley, a lawmaker of Indian descent, beaming on election night with her husband and children after taking a major step toward becoming the first female governor of the state. It was a feel-good image to obscure the stain of a campaign marked by ethnic slurs, accusations of marital infidelity and yet more national marveling over how a single state can produce a string of political embarrassments as long as the Appalachian Trail.

But then, the television cameras started rolling on Alvin Greene’s overgrown lawn.

Because everyone wants to know how Mr. Greene, an unemployed Army veteran who had been completely unknown until Tuesday, inexplicably defeated a heavily favored former legislator and judge to become the state’s Democratic nominee for the Senate — and the state’s latest political circus act.

Mr. Greene had just a few peaceful hours to savor his victory in the tiny, ramshackle home he shares with his elderly father along a quiet highway in Manning, where he has been bunkered since election night. Then, The Associated Press reported that Mr. Greene was arrested in November and is facing a felony obscenity charge; he is accused of showing pornography to a University of South Carolina student. He had been discharged “involuntarily” from the Army and showed no signs of having waged an actual campaign in recent months — no advertising, no staff, no money.

Mr. Greene, who declined to comment on the obscenity charge, would not say how he came up with the $10,440 to register his candidacy. Representative James E. Clyburn, Democrat of South Carolina and the House majority whip, suggested that Mr. Greene was a “Republican plant” and that the circumstance reeked of the “shenanigans” that have become the state’s trademark.

“We have embarrassment fatigue here,” said Dick Harpootlian, the former Democratic chairman of the state. “If there is an embarrassment equivalent of post-traumatic stress disorder, South Carolina has it.”

Even casual observers across the country can recite the recent litany of Palmetto State political antics. The Republican donnybrook between John McCain and George W. Bush in 2000 left more scars than any presidential primary campaign in recent memory. Gov. Mark Sanford’s public swoon over an Argentinean mistress — an affair he carried on while claiming to have been hiking the Appalachian Trail — remains a spigot of late-night punch lines (while Mr. Sanford remains the state’s governor).

The Republican primary campaign to succeed Mr. Sanford featured two operatives claiming to have had extramarital affairs with Ms. Haley (who strenuously denied the accusations) as well as a Republican state senator dismissing her with an ethnic slur.

Now comes Mr. Greene, adding Democratic balance to the state’s Republican-dominated scandal sheets of recent vintage. Mr. Clyburn immediately called for someone to investigate Mr. Greene’s candidacy — who paid for the campaign, who was behind it, how did he ever win?

Mr. Harpootlian, a former district attorney, wants to know why Mr. Greene had not filed any papers with the Federal Election Commission, and Don Fowler, a former Democratic National Committee chairman from South Carolina, said he suspected that someone tampered with the voting machines.

“There is something genuinely mysterious about this whole thing,” said Mr. Fowler, whose wife, Carol, the current chairwoman of the state’s Democratic Party, has called for Mr. Greene to step aside.

Mr. Greene said he had no intention of doing so. He said the whole gambit has been his idea, that he paid the entry fee and that his was — and remains — “a self-managed campaign.” He said he would challenge his Republican opponent, Senator Jim DeMint, to a debate in September. “It will be one hour. Live. On a major network,” he proposed.

Mr. Greene said he was determined to go through with this, which would seem to belie the somewhat shell-shocked demeanor he has projected in several interviews over the last 72 hours. “Can I end this?” Mr. Greene asked in the middle of a brief interview with a local television station in front of his house Wednesday. It might as well be his campaign’s official motto, or wish, at least as far as leading Democrats are concerned.

“Sad,” Mr. Clyburn said, referring to the spectacle that Mr. Greene has become on the cable and YouTube circuits.

Even in Manning, a town of 4,000 where everybody knows everybody, nobody seems to know Alvin Greene. “He just all of a sudden shows up and — boom!” said L. G. Mathis, 61, the owner of L. G.’s Cut and Style, a barber shop downtown.

It is another embarrassment for South Carolina, said Carl F. Jackson Jr, a graphic designer at a local newspaper, The Clarendon Citizen. “Anybody who got beyond eighth grade is a little astounded by this,” Mr. Jackson said, adding his own theory of how Mr. Greene had won. “Maybe voters thought it was the singer, Al Green.”

When asked in a phone interview Friday whether he was having “fun,” Mr. Greene quickly answered yes, before asking for clarification.

Without waiting for an answer, Mr. Greene said he was not interested in “fun,” or signing autographs (which he has yet to do) or indulging any of the trappings of his unlikely celebrity. He is interested in sticking to the issues that are important — jobs, education, justice — and to conveying why he is “the best candidate for the United States Senate in South Carolina.”

Before elaborating on why he was, Mr. Greene excused himself, saying that he had to finish another interview.

update: another great article: (an excerpt, with some amusing use of adjective clauses):

McCoy, who is from Charleston, said she was stunned to learn that the same man she later identified from a photo lineup was running for office, much less had won a party's nomination.

"You're kidding?" said McCoy, who is a Republican. "Oh my gosh, that's ridiculous!"

Posted by Elizabeth Vicary at 9:50 AM