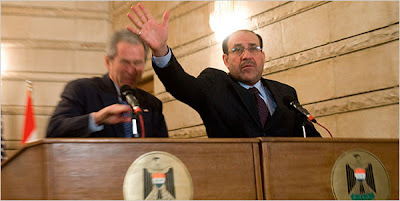 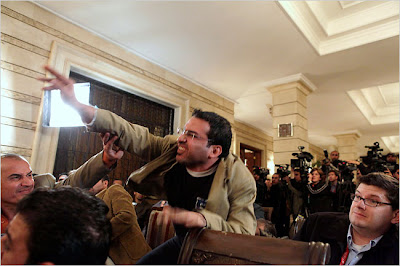 Iraqi Journalist Hurls Shoes at Bush and Denounces Him on TV as a ‘Dog’
excerpts from the New York Times:

The Iraqi journalist, Muntader al-Zaidi, 28, a correspondent for Al Baghdadia, an independent Iraqi television station, stood up about 12 feet from Mr. Bush and shouted in Arabic: “This is a gift from the Iraqis; this is the farewell kiss, you dog!” He then threw a shoe at Mr. Bush, who ducked and narrowly avoided it.

As stunned security agents and guards, officials and journalists watched, Mr. Zaidi then threw his other shoe, shouting in Arabic, “This is from the widows, the orphans and those who were killed in Iraq!” That shoe also narrowly missed Mr. Bush as Prime Minister Maliki stuck a hand in front of the president’s face to help shield him.

Mr. Maliki’s security agents jumped on the man, wrestled him to the floor and hustled him out of the room. They kicked him and beat him until “he was crying like a woman,” said Mohammed Taher, a reporter for Afaq, a television station owned by the Dawa Party, which is led by Mr. Maliki. Mr. Zaidi was then detained on unspecified charges.

Other Iraqi journalists in the front row apologized to Mr. Bush, who was uninjured and tried to brush off the incident by making a joke. “All I can report is it is a size 10,” he said, continuing to take questions and noting the apologies. He also called the incident a sign of democracy, saying, “That’s what people do in a free society, draw attention to themselves,” as the man’s screaming could be heard outside.

In the chaos, Dana M. Perino, the White House press secretary, who was visibly distraught, was struck in the eye by a microphone stand.

Hitting someone with a shoe is considered the supreme insult in Iraq. It means that the target is even lower than the shoe, which is always on the ground and dirty. Crowds hurled their shoes at the giant statue of Mr. Hussein that stood in Baghdad’s Firdos Square before helping American marines pull it down on April 9, 2003, the day the capital fell. More recently in the same square, a far bigger crowd composed of Iraqis who had opposed the security agreement flung their shoes at an effigy of Mr. Bush before burning it.

Mr. Bush’s arrival in Iraq during daylight hours was one measure of progress; his first visit on Thanksgiving Day 2003 took place entirely at night.
Posted by Elizabeth Vicary at 7:18 AM

You should be more circumspect, perhaps. You're allowing your true colors to show through. If you really, really believed the Iraq war to be an unmitigated disaster and the Bush presidency to be as bad as you claim to I doubt you would regard this story as funny, let alone "funniest news story ever". You'd instead see it as tragic.
You're just a poseur and a childish one at that.

But how do you know what aspect(s) I find funny? Maybe it's the ironic/understated way in which the article is written. Maybe it's the absurd image of being hit in the eye by a presumably stable microphone stand. Maybe it's the way in which the article consciously or unconsciously mirrors the HSBC bank ads that highlight surprising differences in cultural perceptions. Maybe I find it comically subversive that a journalist's last resort in the face of an administration that controls information so tightly is to throw a shoe. Maybe I enjoy physical comedy.

[If you really, really believed the Iraq war to be an unmitigated disaster and the Bush presidency to be as bad as you claim to I doubt you would regard this story as funny, let alone "funniest news story ever". You'd instead see it as tragic.]

You obviously take life too seriously.

Ironically, the reporter is based in Cairo and his editors are calling for respect of free speech and defends their reporter's action as an example of this. Of course it overlooks two points:
1. Free speech is free speech, it is not hurling objects at another person.
2. In none of the Arab world is free speech accepted and tolerated as actual practice.

No no, do you know what would be funnier. If Saddam Hussein was still in power and the reporter threw his shoes at him, and then we could watch Saddam have his head cut off on live TV !!! Now wouldn't that be funny ?!

You liberals need to wake up and smell the coffee.

See, I don't get the logic behind that last point at all. Why can't there be three levels of morality operating? Clearly Saddam Hussein had no redeeming qualities, no one is arguing that. But Bush's invasion is a close second in terms of badness. There are much better ways to deal with totalitarian governments and governments that don't share your high standards of human rights. It seems like the shining modern example of this is the EU. Neighboring countries strongly desire to join for economic reasons and this becomes leverage to require that human rights and environmental standards are complied with. I'm not saying that happens quickly or easily, but the world is going to be changed for the better only by connecting countries in economic ties and acceptance of some common rules of law. You can't just go invading places. We're supposed to be setting the example here.

"Clearly Saddam Hussein had no redeeming qualities, no one is arguing that. But Bush's invasion is a close second in terms of badness."

A very abbreviated list of positive things Saddam did for Iraq:

1. Helped lead a non-violent coup of an incompetent and destructive ruler.
2. Served as a general in the Iraqi army.
3. Seized international oil interests in 1972.
4. Founded and ran Iraq's National Campaign for the Eradication of Illiteracy.
5. Brought universal education to Iraq.
6. Brought electricity to most of Iraq; before it had been sparse outside the most major of cities.
7. Promoted feelings of Iraqi nationalism and pride in the nation's long history.
8. Revolutionised Iraq's mining industry.
9. Revolutionised Iraq's energy industries.
10. Instituted a system subsidising farming families in times of crisis.
11. Set up farming cooperatives throughout rural areas, including training for unskilled peasants.
12. Removed Sharia law from Iraq.
13. Granted greater rights to women - rights unheard of in the Middle East at the time.
14. Created arguably the best public healthcare system in the Middle East.
15. Modernised Iraq's system of roads.
16. Legislated support for the families of deceased soldiers.

That being said, he used chemical weapons, violated other nations' sovereignty and murdered thousands of people. Not sure I would consider violating a U.N. ruling by leading a military engagement with the cooperation with 30+ other nations a "close second". Maybe a distant fiftieth.

Was anyone else impressed with W's quickness in avoiding that first shoe?

I watched the video of this episode several times. I think that Muntader al-Zaidi has a strong arm with good control and that Theo Epstein of the Boston Red Sox should be iniviting Mr. al-Zaidi to spring training.

I live near Boston and am a Red Sox fan.