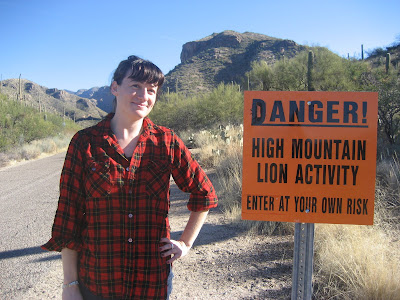 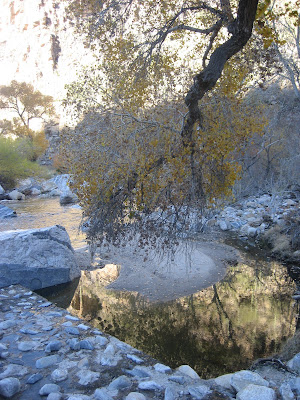 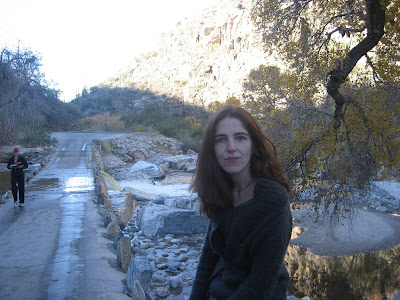 I'm in Tucson visiting my friend Jean. This morning we went for a peaceful walk in Coronado National Forest. On the way in we were handed a neon green warning sheet titled "Problem Mountain Lions." I will reproduce the highlights. (Notice that all italicization is taken from the original)
If mountain lions have always been here, why be so concerned lately?
Because some "problem" mountain lions in Sabino Canyon have recently displayed aberrant behavior that is known to precede attacks on humans. This behavior includes
*active during daylight hours
*unafraid of humans
*stalking humans
.
What should I do if I'm attacked by a mountain lion?
*Fight back with whatever you have at hand without turning your back.
*Try to remain standing to protect your head and neck.
Where are mountain lions likely to be?
*Mountain lions may be anywhere, but cliffs and steep slopes are favorite vantage points from which they can easily pounce on prey from above.
*Cats also conceal themselves in brushy areas where they can rush prey then drag their kill back into a protected area.
Why would a mountain lion attack a human?
Cougars are opportunistic predators. It is feared that the problem may NOT discern "animals" from "humans" as prey. Lions are capable of killing large animals, including deer, livestock, bighorn sheep, and elk.
How dangerous are there problem lions?
Extremely. These big cats are solid muscle, can leap up to 20 feet, and outrun deer for short distances. They are excellent climbers and jumpers, and can swim when necessary. They are perfectly camoflaged and often remain unseen until they attack. Nine out of ten humans attacked by mountain lions are children. KEEP YOUR CHILDREN CLOSE AT ALL TIMES!
.
A Great Idea Hits Me At Lunch
I had a great idea at lunch, let me give you the background story first. Jean and I once (like 5 years ago) took a massage class together at the Open Center every Monday night for eight weeks. It was very jolly-- we would practice giving each other massages for 1.5 hours, then go out for Thai food, and drink a lot of wine. Of course, each week we had mostly forgotten the previous week's lesson (it went by body part-- the back, the neck, the arms, etc) , and by this point (lunch), both us of combined could only remember one stroke. We were also talking about the ways we expect society to change in the next 10 years (we passed a store that seemed to sell only rubber stamps and laughed), and I mentioned that the Open Center was no longer offering any massage (not even shiatsu!), only foot reflexology. (and I like foot massages) Jean pointed out that we probably only needed to look on the internet and get some notes on basic strokes and we'd be fine.
.
And then my idea came to me. I call it The Instructive Massage Glove. The Instructive Massage Glove is a glove you wear while giving someone a massage, but the glove itself gives you feedback: "not so hard," "a little lower." (because who wants to talk when you're trying to relax, right?) The glove has been programmed to know how much pressure most people like in their back massage, and has some program with some information about anatomy, so it knows where muscles, pressure points etc. are.
.
like it? I think it would be the perfect present to buy your girlfriend / my boyfriend for Christmas.
.
I just read Paul Krugman's book, The Return of Depression Economics. It's good, very readable, in the same populist vein as Freakonomics or Malcolm Gladwell's stuff. Not quite as good, but still interesting: Predictably Irrational (Dan Ariely).
Posted by Elizabeth Vicary at 4:53 PM

My brother lives in Tucson, a few minutes from Sabino Canyon and we have hiked there for years. (My daughter has a scar right in the middle of her forehead a la Harry Potter from doing a header on a trail there when she was 3.) I remember a few years ago when there were serious forest fires on Mount Lemon and the mountain lions came down into the canyons, including Sabino Canyon. I'm wondering whether they just stayed down in the canyons because there was more food or whether this is a new group of mountain lions. Anyway, enjoy Tucson.

Ha! A couple of years ago I too was on a desert walk in the Tucson area, and became acquainted with the mountain lion rules: "If you come across a mountain lion, stare it down and throw a rock or a stick at it". Yeah, right! To which I add, also carry an extra pair of underwear with you. :)

Sabino Canyon is such a cool place to hike! I love to ride a goodish way up and then walk down. I love all the variety of birds in that part of Arizona, and fun ones like the cactus wren.

Happiness Hypothesis, by Haidt. Read it.