terrorism can be funny too

Explosion Rocks a Starbucks on the Upper East Side

Jo Parr, 42, who lives two blocks east of the coffee shop, said that the blast had woken her up.
“It was really loud,” she said, describing the sound as a “concussion.” 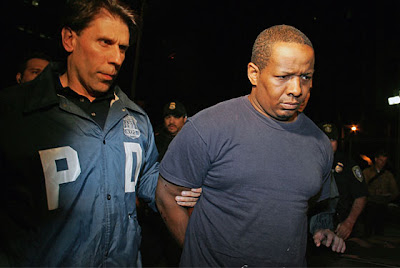 When U.S. Magistrate Judge Lisa M. Smith asked James Cromitie if his judgment was impaired during his appearance in federal court in White Plains, the 55-year-old confessed: “No. I smoke it regularly…I understand everything you are saying.”

Is the Bronx Terror Plot Good for Stoners?

Just imagine, for a moment, how lethal and effective these potential terrorists could have been if they weren't getting high. Maybe, with a clear head and increased awareness of their surroundings, they would have noticed they were being constantly surveilled. Perhaps they would have figured out that the explosives the FBI provided to them were duds. And most important, had their capacity for reason been uncontaminated, they might have recognized that the mysterious new stranger in their mosque was working for the government, as everyone else was apparently able to deduce quite easily. As the Post reports:
[Head imam Salahuddin Mustafa] Mohammad said members of the mosque had detected a man they believe was the government's informant, trying to get people to talk about jihad and radical Islam. The man would take people out for expensive meals to win them over, Mohammad said. "Anyone with any smarts knew to stay away from this guy," he said.
Anyone with smarts? Or anyone who wasn't easily swayed by the prospect of free food?
(click on the headline above for more clear-headed reasoning by New York Magazine)

not related to terrorists, but great:

Posted by Elizabeth Vicary at 8:43 PM

Man. I expect it from the AP and from second-string newspapers, but the New York Times giving in to the headline cliché of a bomb "rocking" its target? Why does a bomb always "rock" its target? The building doesn't rock back and forth. It just sits there with a big hole in it.

Chess players would do a lot worse for free food (and cheap food, too, not an expensive meal). At the Manhattan Chess Club at posh Carnegie Hall, the prospect of a half-eaten, altogether dubious tuna sandwich from Merit Farms downstairs (also known as Merit Clowns) would drive the bums (chess players waiting for a quad) into absolute paroxysms.

Such half-eaten victuals served up not so fresh in an anonymous brown paper bag would actually prompt a bidding war.