from the obituary of Velupillai Prabhakaran 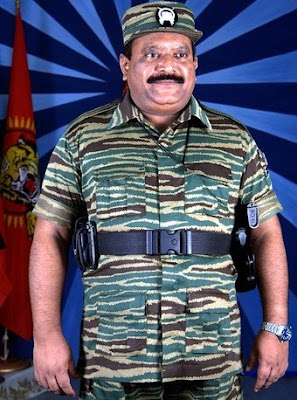 "He stayed mostly underground where, like some large grub, he was oiled twice a day by his bodyguards and fed on curry and Clint Eastwood movies, in which cops and cowboys shot themselves out of trouble. He had an escape plan, or several. His cadres would kill him, and burn the body; he would squeeze himself into a submarine; he would bite on the cyanide capsule that hung on a black string round his neck."

I think the horizontal tiger stripe camo makes him look fat. However the latest theory on horizontal stripes suggests that they don't make people look fat, especially when one of the people is Kelly Brook.

It's not the pattern of your clothes that make you look fat, it's your wrong eating habits...