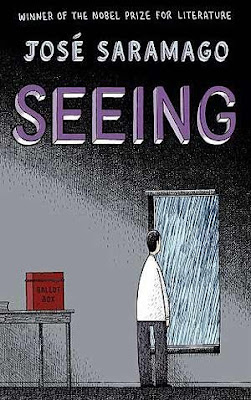 hello! I thought you might enjoy a sentence from a book I'm reading : Seeing by Jose Saramago. I enjoyed his earlier work, Blindness, a lot. Seeing is about an election day where torrential rain discourages people from voting in the morning, but then they all suddenly queue up at polling stations that afternoon, when the downpour abates. Later, when the votes are counted, 75% of them are simply blank. No one knows why. (at least, not yet; I'm only 50 pages in) The government is infuriated and declares a state of siege on the citizens of the capital (the only area affected by the "blank voting" phenomenon). Here's the sentence:
The commentators, who were following the electoral process on the various television programmes and, for lack of any firm facts on which to base their analyses, were busy making educated guesses, inferring the will of the gods from the flight and the song of birds, regretting that animal sacrifice was not longer legal and that they were thus prevented from poring over some creature's still twitching viscera to decipher the secrets of chronos and of fate, these commentators woke suddenly from the torpor in which they had been plunged by the gloomy prospects of the count and, doubtless because it seemed unworthy of their educational mission to waste time discussing coincidences, hurled themselves like wolves upon the fine example of good citizenship that the population of the capital were, at that moment, setting the rest of the country by showing up en masse at polling stations just when the specter of an abstention on a scale unparalleled in the history of our democracy had seemed to be posing a grave threat to the stability, not just of the regime, but, even more seriously, of the system itself.

It's a very funny book. 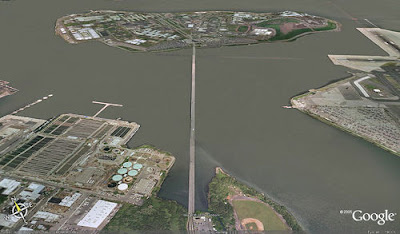 In other news, I'm trying to volunteer to teach chess at Rikers Island (a local prison) this summer. I bet it's rewarding to teach people who have that much time to study and so little else to do.
Posted by Elizabeth Vicary at 9:40 AM

Elizabeth, it's always fascinating to get a glimpse of what you're reading. The vast majority of people I run into these days seem to have next to zero attention span (& I think it's getting progressively worse). Some blame it on TV viewing, but I think it's also exacerbated by other cultural& chemical factors.
Rikers Island is actually a fairly famous place as prisons go, probably because of its location. Up here in New England, MACA has a fairly active chess outreach to prisons. I know that they occasionally put together 4 or 5 player teams for prison visits & from what I've heard the inmates field very competitive teams. If you're going in there specifically to teach, it'll be quite an experience, but don't be surprised if you find some rather capable players among the population.

Interesting Ath2044. Here's an article that actually frightened me so much I stopped watching television. http://www.thelizlibrary.org/liz/johnson.html I have since allowed myself some mindless television, however I don't have cable for this very reason. However I am probably not helping by spending too much time on the internet :(