I can't believe I touched my king 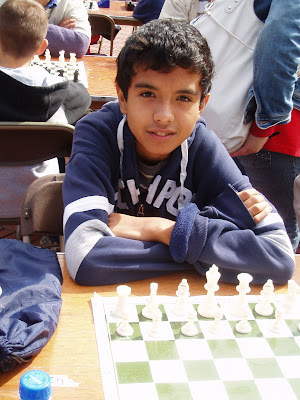 Alexis Paredes
Here's a game I played today in afterschool: 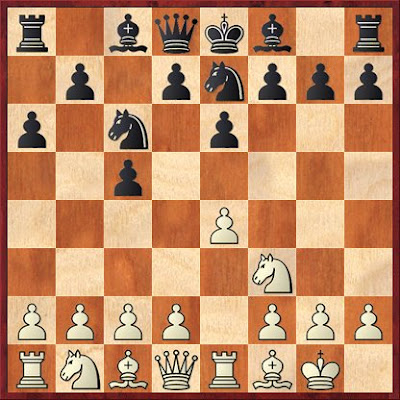 6...b5
6... d5 is the right move; during the game I remembered the idea was d5 and recapturing with the queen, followed by Nf5, which makes it very hard/impossible for white to play d4, but I thought I should wait for c3, that I didn't want to deal with ...Qxd5 8. Nc3. This is just wrong, on 8. Nc3 I play 8...Qd8 and it's nice because black keeps pressure on d4. but delaying ...d5 makes the whole idea stupid, because once I give white the extra tempo for c3, he now can play d4. 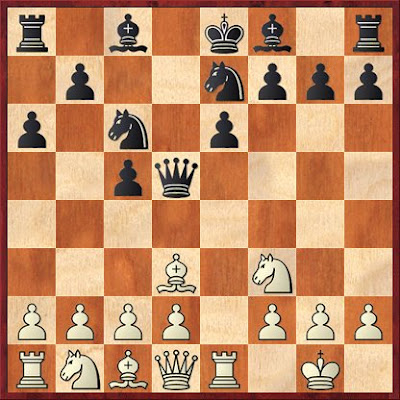 And now there are two games, one inside the other, in Richard's Palliser well titled book: The Bb5 Sicilian. The first is Joel Benjamin -- Anna Hahn, US Championship Jan 2002: 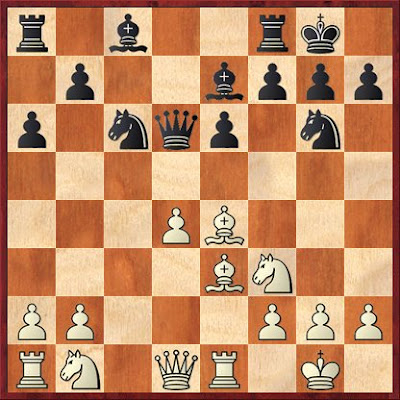 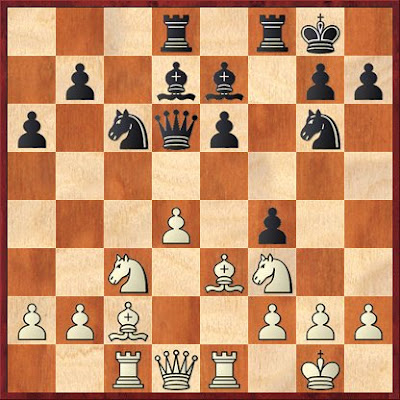 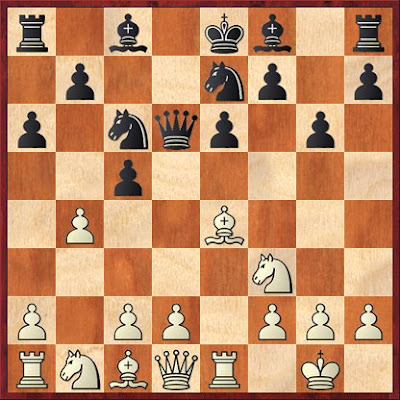 So, these are two interesting games to compare. Palliser says the knight is awkward on g6 and Shabalov's choice makes more sense, but he also makes it sound like Hahn was worse out of the opening, and I don't know if that's really true after 13... Nb4. I have a suspicion that Palliser might think this way because Shabalov is the stronger player and his game is later, so the natural expectation would be that he played an improvement. But it's possible 8... g6 is more just a stylistic choice, since Alex doesn't usually play isolated queen pawn positions.

Anyway, I was having those thoughts, wondering what move I would play if I got the position again, so I checked for other games, you know, see what's fashionable, get a third, fourth opinion. And it turns out white scores 92% after 8. Bd3. But I like Ng6. 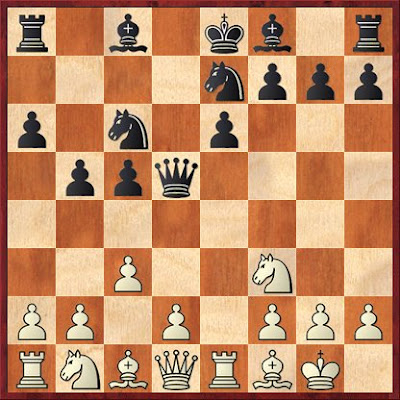 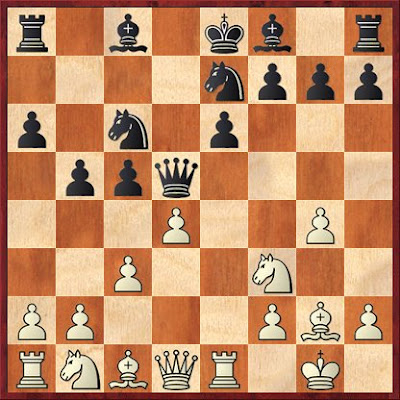 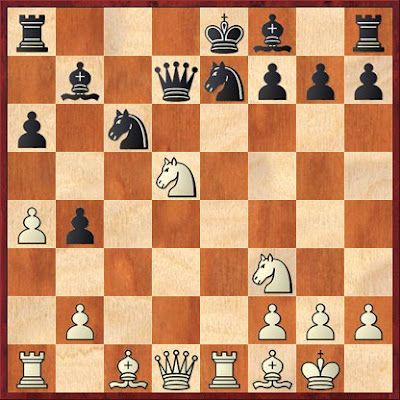 After the game, I told Alexis that 9. c4 was bad and I shook my head disapprovingly at him, but I guess I will have to eat mywords tomorrow. 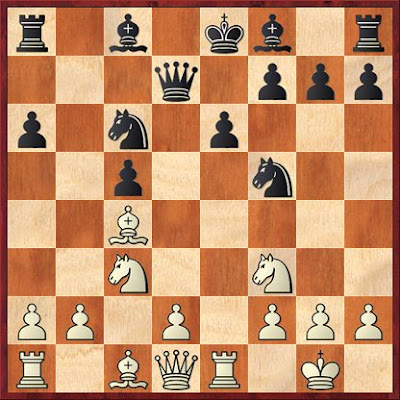 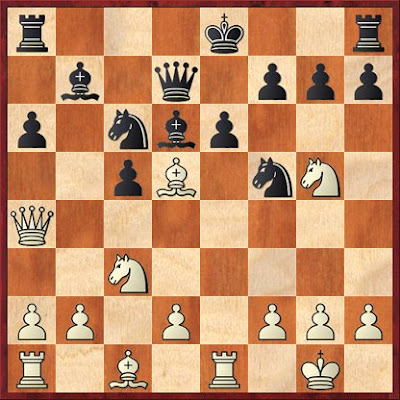 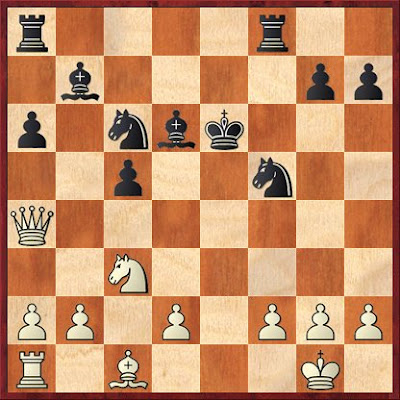 and just be up lots of material, but I didn't really want to get involved, risk losing to a kid in front of everyone, which turned out to be good judgment on my part, because white has 18. Qb3+ at the end, winning my bishop and being much better. 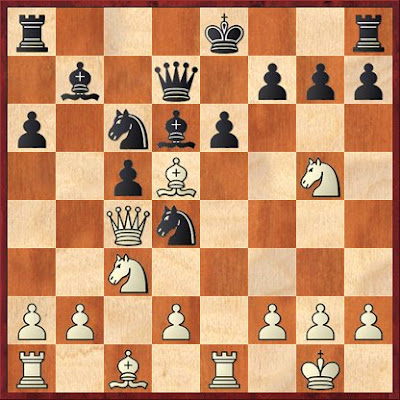 back to the game! 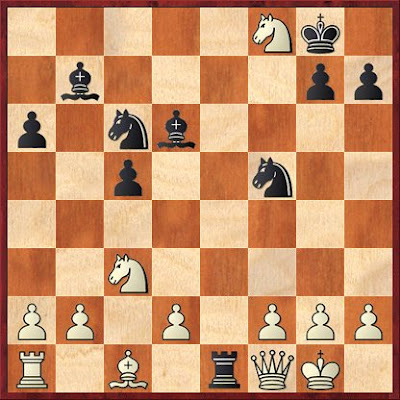 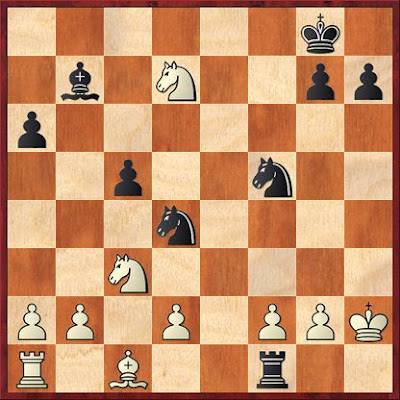 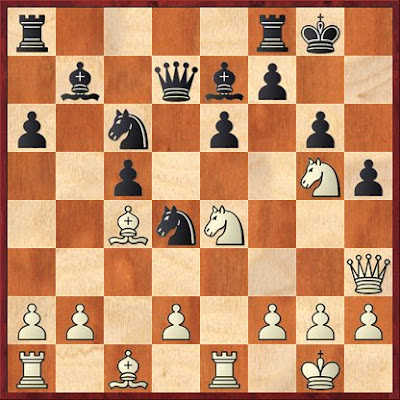 back to a frightening reality

19...Kg7 I knew I was being a big chicken here, and that 19... Nc2 was probably the best move by far, but I was low on time and afraid of missing something. I think I mistrusted myself because I'm not playing often. 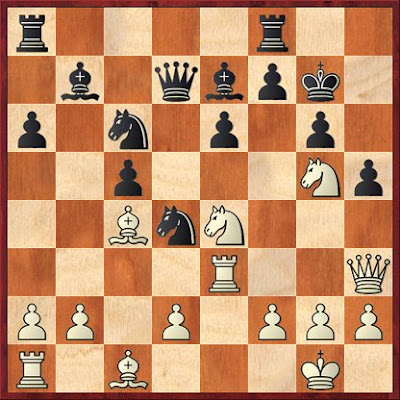 I can win a piece here! Guess how? 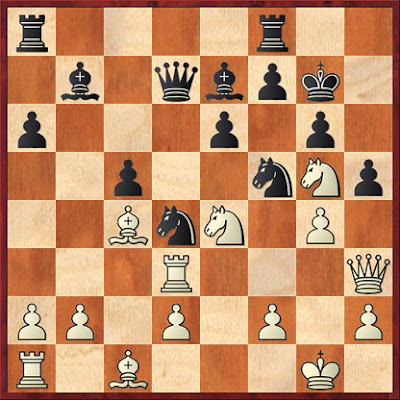 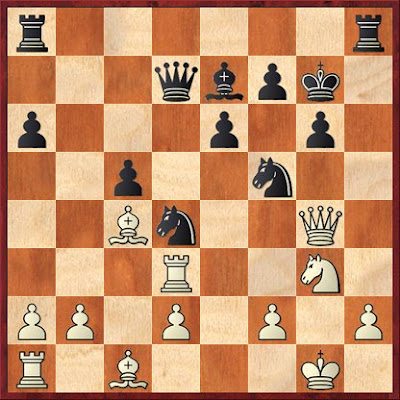 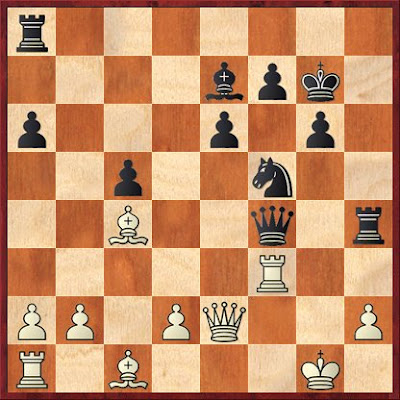 Here we each had a couple minutes. I was panicking, which I like to do in time trouble. I played with the absolute minimum amount of technique possible, but managaed to reach this position with 22 seconds (and time delay): 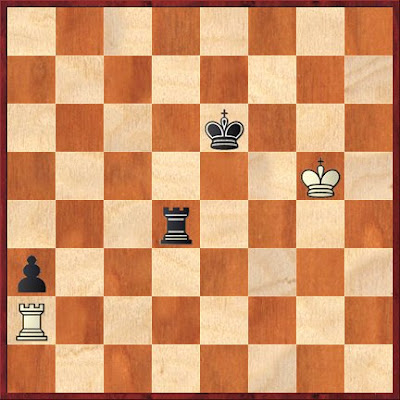 and I just touched my king, and then stared at my hand in horror and disbelief. I can simply play Ra4 and it's over, but now I lose my pawn and
1/2 - 1/2
Posted by Elizabeth Vicary at 5:21 PM

This is an absolutely wonderful post. The interplay of both your thought process as you played and analysis of relevant theory make the post highly instructive and interesting to an intermediate player such as myself. The extensive use of diagrams greatly increases the "readability" of the post. This is what chess blogging is all about! I appreciate the time and effort you put into this post.

I agree with Marty except that I still had to put this one into a .pgn player to follow it, but I really like this style of more rather than fewer diagrams & all kinds of comments including both theory & ramblings.
A fascinatingly tactical but flawed game; I guess that's what you get at G/30.
I like the in-depth analysis of the opening with GM game references, so I won't comment on that part except to say that you seem a bit tentative considering your knowledge of this & similar variations.
I thought 12. Ng5 looked good (for white) immediately or even after 12.Bd5 Bb7. It seems like you're in trouble on e6 & f7, not so much after 13.Qa4.
After 19... Kg7, 20.b3 with the idea of Bb2 looks interesting; I don't know if black then has time for Nc2 because white may then choose to ignore both rooks & proceed with the attack on both e6 & the long dark diagonal.
Certainly 22.b3 looks more troublesome (for black) than 22.g4 as played.
I agree with you about 25... Qb7; it also seems to threaten 26... Rxh2 right away (27.Kxh2 Rh8+ 28.Kg1 Ne2+ 29.Qxe2 Nxg3 30.fxg3 & some more hijinx starting with 30... Qh1+ 31.Kf2 Rh2+, etc.), but that may not be everyone's cup of tea & of course my universal disclaimer:
I didn't look at this stuff with Fritz or Rybka (in fact I didn't even have a chance to review my typing) & I'm not an IM, so it could be all garbage.

that is a real cute pic of alexis